Richmond Back in the Red

The fifth and final manufacturing survey for the month of September from the regional Federal Reserve banks was released this morning, and it did not end the month on a high note.  The Richmond Fed’s headline reading fell into contractionary territory this month for the first time since May 2020 as the index dropped 12 points month over month falling from +9 down to -3.  Relative to all the other regional Fed reports, Richmond only Richmond reported contraction in September. 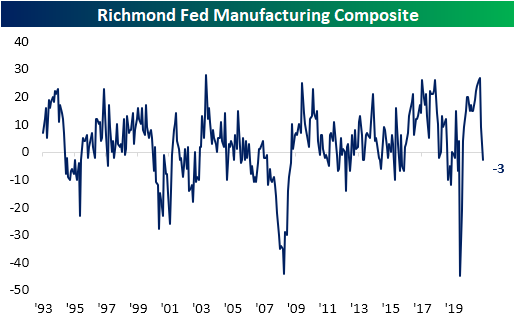 The 12 point decline month over month in the headline reading was significant ranking in the bottom 5th percentile of all monthly moves. But it was actually a smaller decline than last month when the index dropped 18 points.  Regardless, the 30-point combined decline over the past two months is the second largest on record behind the 38 point drop in April of last year.

Factoring into that headline weakness, most of the categories of the report were also lower month over month.  Given those declines, most readings are also now in the bottom end of their historical ranges with some exceptions.  Order Backlogs, Vendor Lead Times, Equipment and Software Expenditures, Employees, Wages, and price indices are all still in the upper decline of readings. 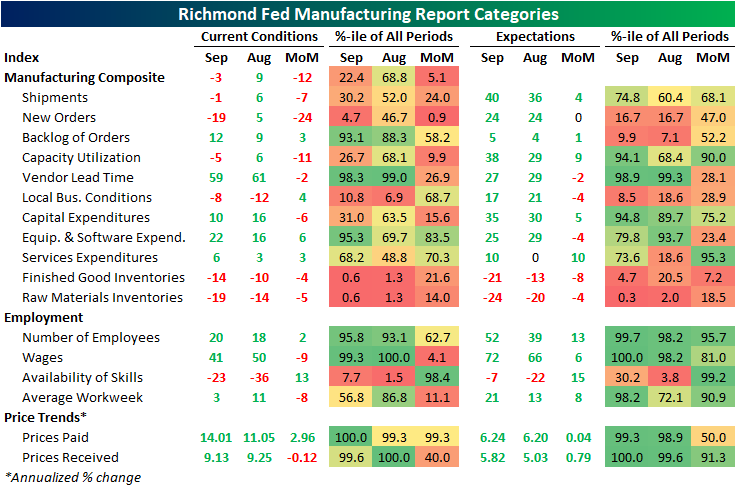 By far the largest decline in September was for New Orders.  That index plummeted 24 points versus August for the fourth-largest decline on record and putting the index in the bottom 5% of its historical range.  In other words, demand slammed on the brakes in September.  In spite of that decline, expectations have held up relatively well at 24; unchanged month over month. Shipments also fell into contraction albeit less dramatically.  Meanwhile, Vendor Lead Times improved as the index fell 2 points, but that remains an extremely elevated reading indicating continued pressures on supply chains. 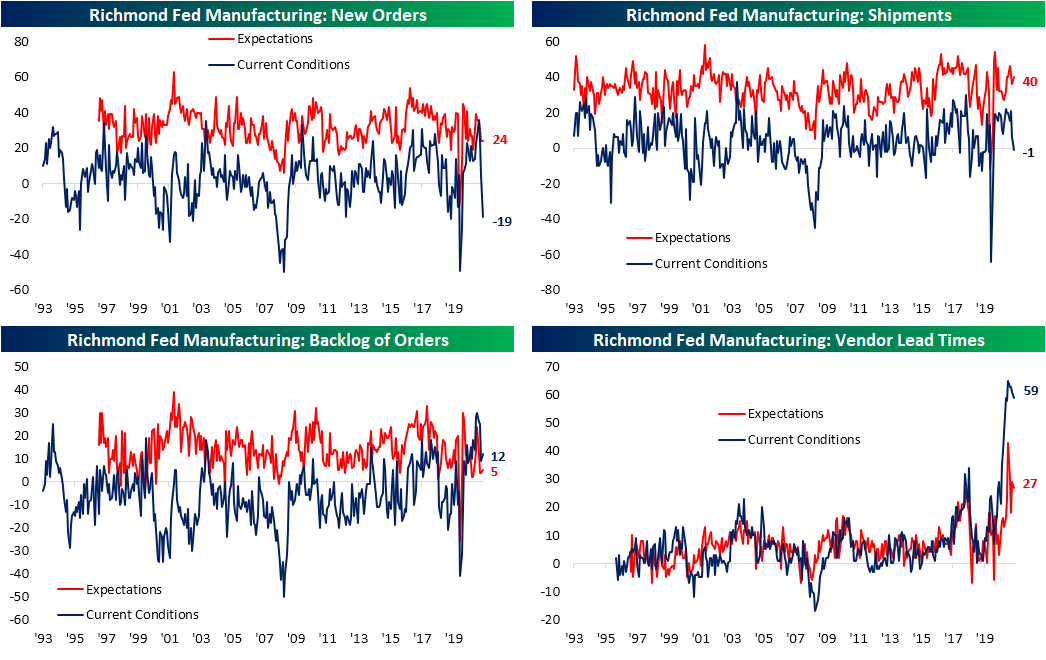 One potential reason for shipments having pulled back is a complete lack of inventories.  Both readings on raw materials and finished good inventories fell month over month and are at historically depressed levels across both current conditions and expectations. 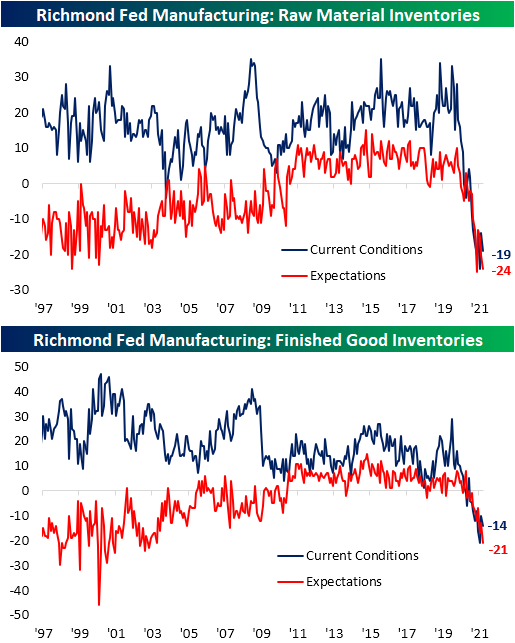 Indices tracking employment were perhaps the healthiest area of the report. The index tracking the Number of Employees edged higher to 20 while expectations saw an even larger jump, stopping just short of a record high. Wages, meanwhile, declined 9 points from a record high. That reading is still the third-highest on record, though, and expectations were at a record high. While the Average Workweek index was also lower MoM, there has been another improvement in the number of firms reporting a lack of availability of skilled workers. 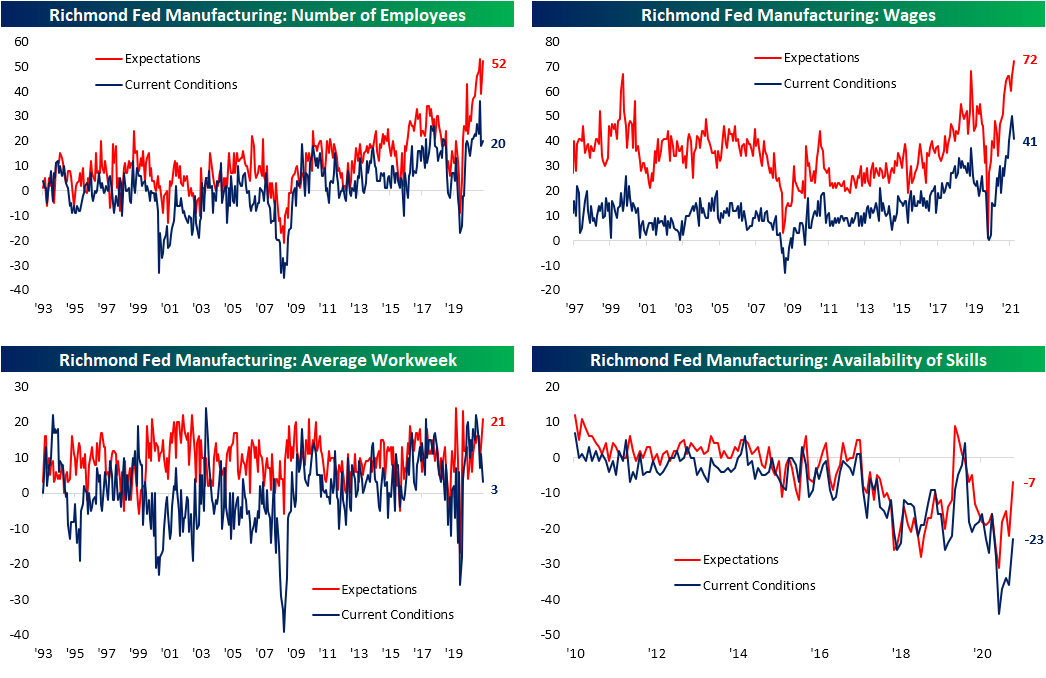 The other area of the report to touch records this month concerned prices. Prices paid came in at a new high with prices increasing 14% annualized.  Prices Received were slightly lower at 9.13%, but that is well above other readings throughout the survey’s history and the expectations index set another record.  Click here to view Bespoke’s premium membership options. 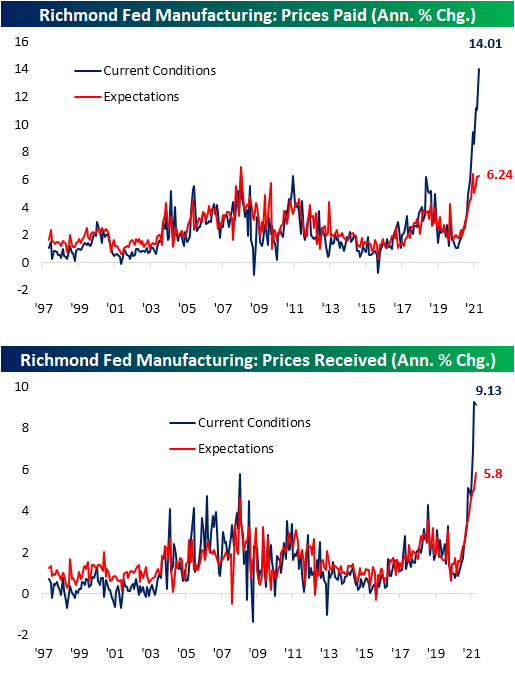