Just like yesterday’s reading out Dallas, this morning’s release of the Richmond Fed’s Manufacturing survey was disappointing relative to expectations.  Forecasts were calling for the index to hold steady at the December reading of 19. Instead, it fell 5 points to the lowest level since July. Like the Dallas Fed’s survey, this reading points to a still-growing but also decelerating manufacturing sector in the Fifth District that also goes contrary to other strong readings like those from Markit and the neighboring Philly Fed; both released last week. 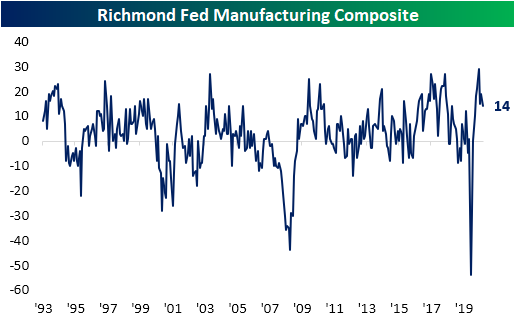 That decline in the headline number was shared in most of the underlying components.  Of the 17 sub-indices, 12 were lower month over month.  For some of these, those declines were historically large and brought the indices to the bottom percentiles of historical readings. Currently, there are now four indices indicating contraction. Two have to do with expenditures, one with finished good inventories, and the other for the availability of skills. As for the indices for future expectations, breadth was similarly weak. 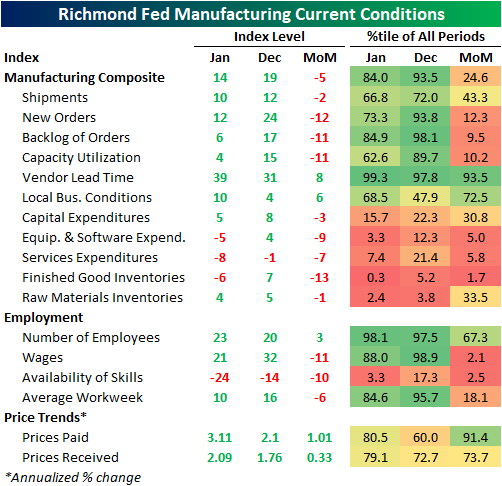 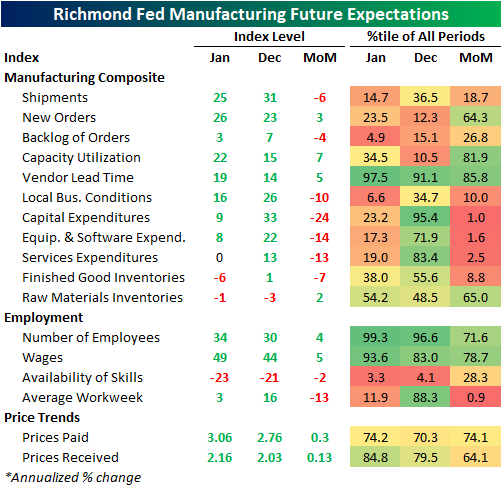 New Orders erased all of the move higher from December as it came in at 12, just as it did in November.  With New Orders growing at a slower pace, the Backlog of Orders likewise grew at a more muted pace.  That index fell to 6, the lowest reading since August.  The 11 point MoM drop was also in the bottom decile of all monthly moves.  Given the deceleration of these two, Shipments likewise pulled back. The index for Shipments fell to 10, the lowest reading since the last contractionary reading back in June.  While that slowdown in shipments is likely in part due to some slowing in demand, supply issues also appear to be a potential issue.  Higher readings in the Vendor Lead Time index means that suppliers’ products are taking longer to reach the surveyed manufacturers. This month, the index rose to a reading of 39. That is in the top 1% of all readings in the history of the survey.  The only higher readings came early in the survey’s life in December of 1994 (282) and January of 1996 (75). 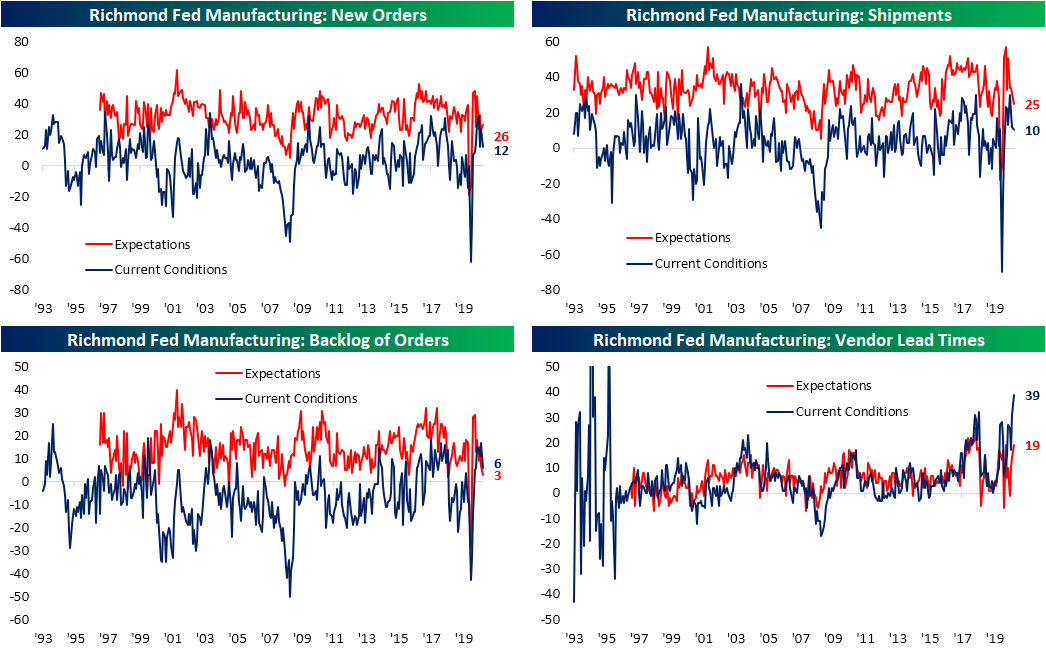 As orders still grow, manufacturers are taking on more employees.  The index for the Number of Employees rose from 20 in December to 23 in January. That ties the pandemic highs from September and October for the highest reading since August of 2018.  Similarly, the index for expectations for Number of Employees made its way higher in January. At 34, the index has only been higher once back in September.  Although employers are taking on more people and expect to keep doing so at a historic rate, both of the indices for Wages and the Average Workweek were lower.  Regardless, they both remain at historically strong levels and consistent with further growth. Additionally, one of the components of the report that is the most at an extreme is the index for Availability of Skills. The index dropped another 10 points in January and now sits in the bottom 3% of all readings since the series begins just over a decade ago.  In other words, firms are experiencing a historic shortage of labor with desired skills. 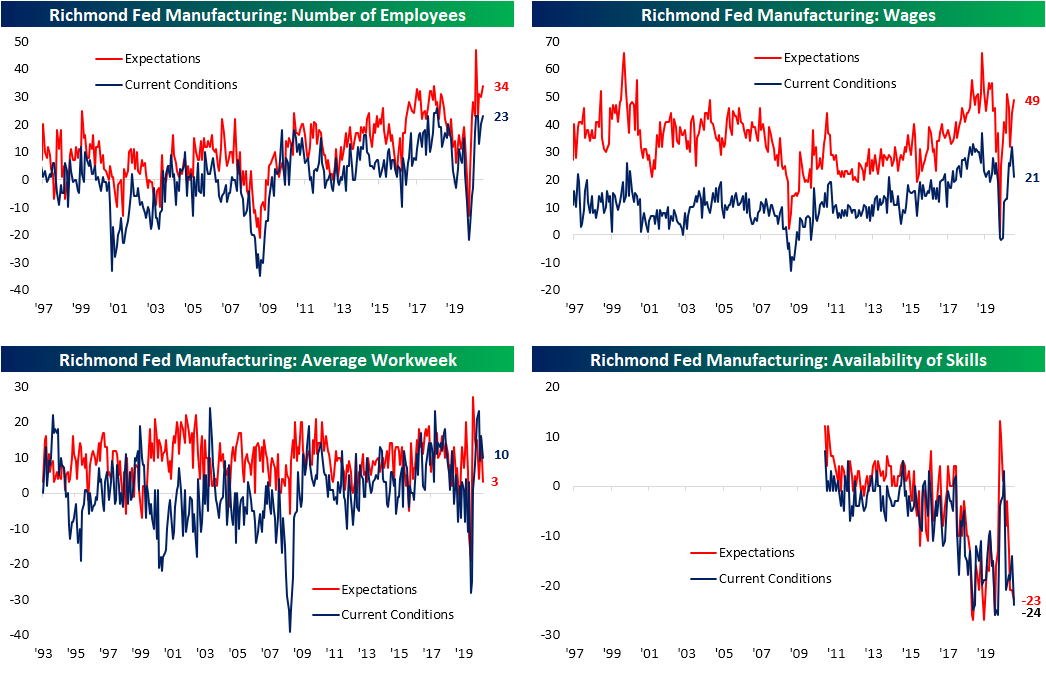 Contrary to the increase in employment, firms are cutting costs elsewhere. For the current conditions indices of the three expenditure related topics, each one was lower in January with Equipment and Software Expenditure and Business Services Expenditure both falling into contractionary territory. 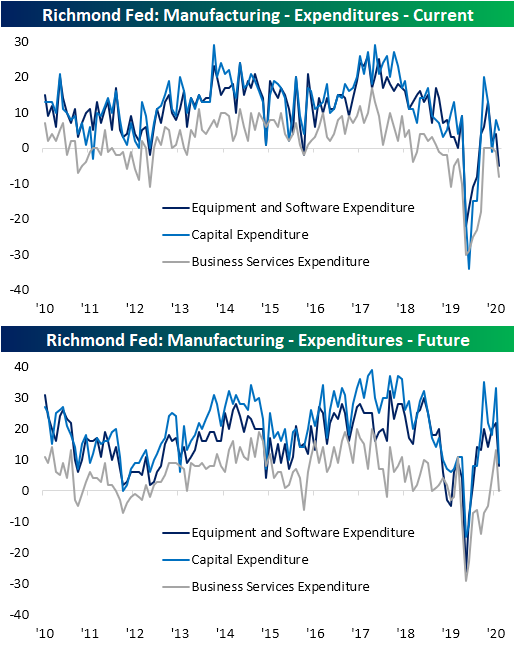 Finally, just as we have seen in other manufacturing surveys, prices are showing further acceleration for both prices paid and received. Prices paid came in at the highest level since April of 2019 and prices received at the highest level in 11 months. Click here to view Bespoke’s premium membership options for our best research available. 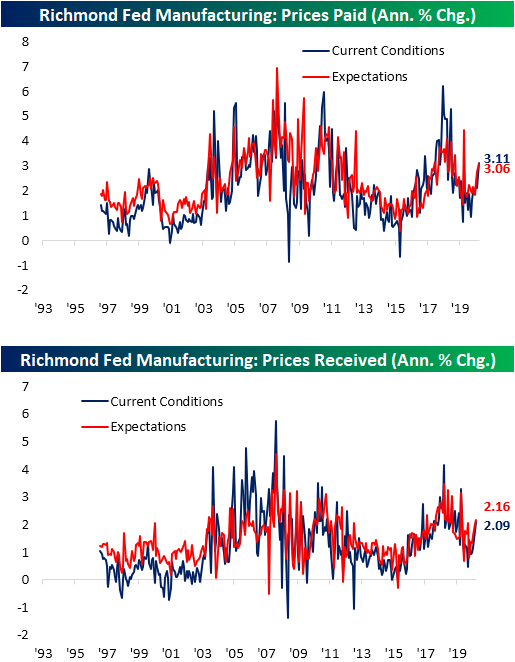