Positive developments on the trade front over the past couple of days have been a tailwind for the Technology sector, which has exposure via trade heavy industries like the semiconductors.  As the sector’s price has risen, so have valuations. Keeping track of valuations using our Daily Sector Snapshot included with the Morning Lineup and Closer, we have been repeatedly noting that the Technology sector has seen its price-to-earnings ratio consistently in the upper end of the past decade’s range recently.

In fact, with yesterday’s rally further elevating price, the P/E ratio is now in the 100th percentile of all readings of the past ten years. In other words, the 25.5 P/E yesterday was the highest of the past ten years. The last time the ratio was this high or higher was back on November 7th of 2007. Although the valuation is undoubtedly elevated now, the P/E ratio is actually still well off of its highs and only in the 68th percentile of all readings of the past 25 years.  As shown below in the chart of the sector’s P/E ratio over the past quarter-century, the current level has rarely been observed since the end of the Dot-Com Bubble.  But the ratio is also still well below levels seen during the bubble in the late 1990s.  Additionally, the build-up to current levels has been much more gradual than around that time. Simply put, while the sector’s valuation has run hot, it’s not even close to what we saw during the 90s heyday for Tech.  Click here to learn more about Bespoke and its research offering. 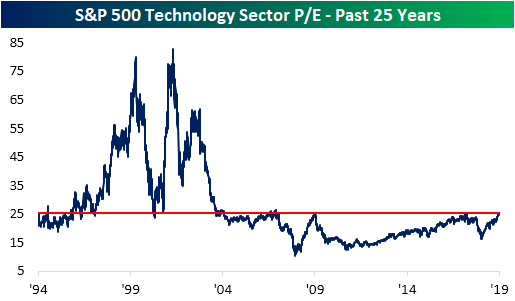