Revisions Bring The Streak Back to Life

Last week saw an impressive reading for jobless claims falling to 576K. While that was revised slightly higher to 586K this week—which would still be well below the previous low for the pandemic—today’s release saw further improvements with initial claims dropping another 39K from that revised level to 547K.  That brings the total decline over the past two weeks to just under 200K; the largest since the first week of August when claims first fell back below one million. 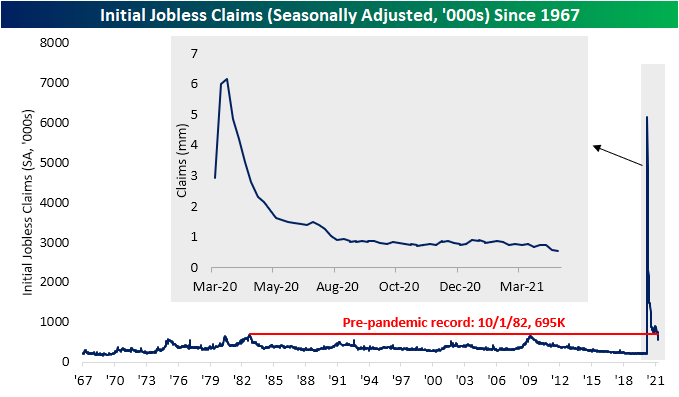 On a non-seasonally adjusted basis claims likewise continue to fall which is normal given the time of year.  The current week of the year (week number 16) has only seen unadjusted claims rise week over week 13% of the time going back to 1967 when the data begins.  In other words, the improvement in claims comes alongside seasonal tailwinds as non-seasonally adjusted initial jobless claims fell to 566.5K this week from 623K last week. The picture for Pandemic Unemployment Assitance was not as positive as the program experienced a small uptick from 131.7K to 133.3K.  Nonetheless, that is the second week in a row with a very low count in claims for this program. 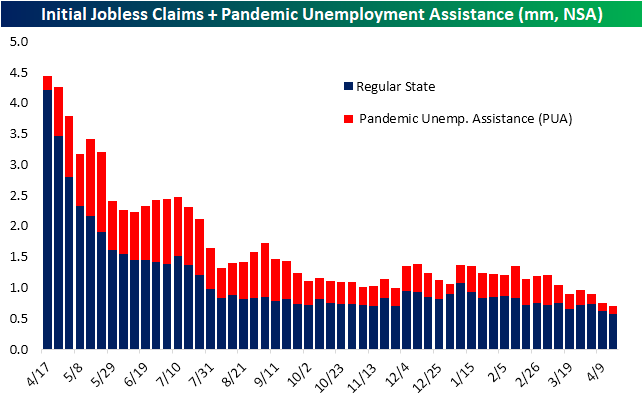 Continuing jobless claims had been on an impressive streak of 12 straight weeks of declines, but that appeared to end last week after rising to 3.731 million. Fast forward to today’s release and that reading was revised down significantly by 23K to 3.708K.  Given that was below the prior week’s 3.717 million reading and the most recent reading fell further to 3.674 million, the streak of consecutive week-over-week declines has been brought back to life, extending to 14 weeks long. As shown in the second chart below, that makes for the longest streak of consecutive declines on record.  Overall, the continuing claims picture continues to consistently improve as continuing claims are well below the pre-pandemic record from the last recession. Granted, current levels are still historically elevated around levels of past highs like those in the early 1990s and 2000s. 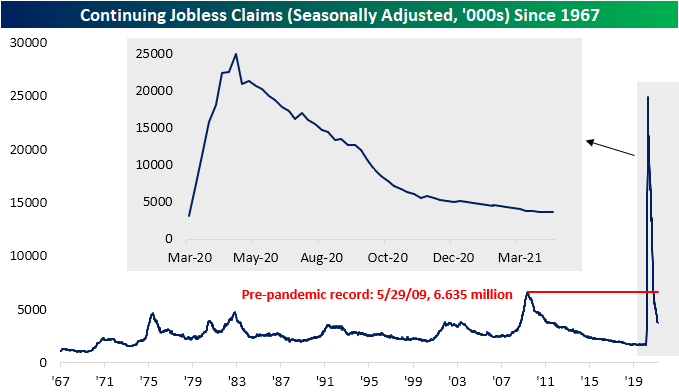 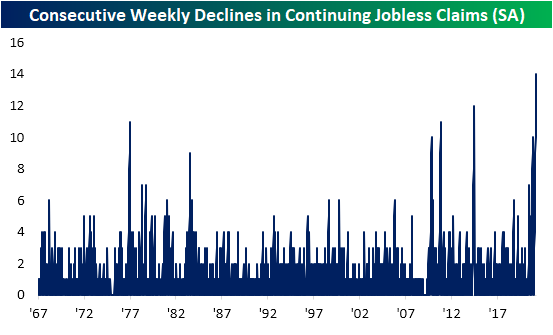 When factoring in all programs, the most recent data is for the first week of April.  Based on the latest results, we saw an uptick in total continuing claims across all programs rising just under 500K to 17.4 million.  While regular state claims and the Extended Benefits program both saw declines of more than 100K, they were offset by 265.2K and 447.7K respective increases in PUA claims and Pandemic Emergency Unemployment Compensation (PEUC) claims. Those increases bring these programs’ claim counts back up to similar levels as a month ago. Meanwhile, Extended Benefits claims are at their lowest level since early October, and regular state claims are at the lowest of the pandemic.

As for the composition of claims, those moves meant a significant share (35%) of total claims still come from extension programs like PEUC and Extended Benefits. While that is below the highs from last month on a combined basis, breaking this down further, the PEUC program’s share of total claims reached 32.2% in the most recent week’s data; a new high for the pandemic. Meanwhile, the Extended Benefits program’s share fell to the lowest level since October.  There is a similar dynamic for PUA and regular state claims with the former accounting for a growing share of total claims and the latter accounting for the smallest share of the pandemic. Click here to view Bespoke’s premium membership options for our best research available. 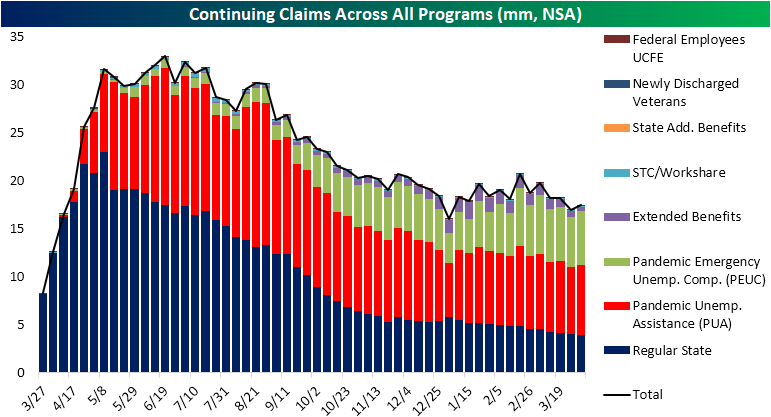 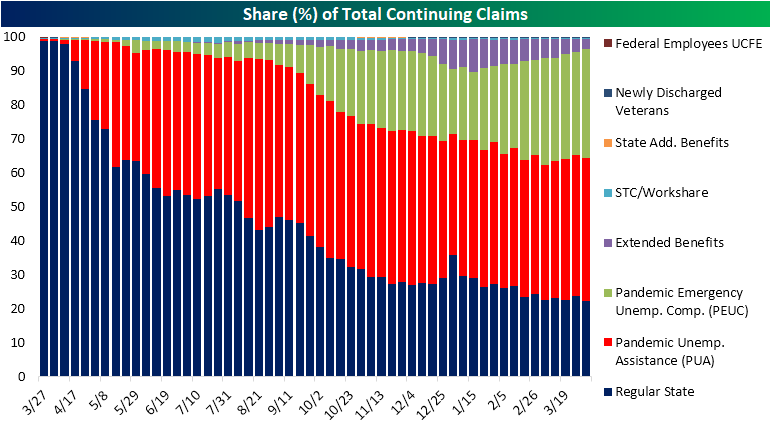