As we highlighted in Monday’s Chart of the Day, if there was going to be a gap down of over 1% it could not have come on a better day of the week. After ultimately falling over 1.5% as of Monday’s close, “turnaround Tuesday” was in full effect yesterday with the S&P 500 rallying 1.01%.  In the history of the S&P 500, there have been 162 prior instances of a full day decline on Monday of over 1% and a subsequent turnaround Tuesday rally of over 1%.   This week was the first such occurrence since August 12th of last year (which was actually a back-to-back week with this type of move) and just the sixteenth occurrence of the past decade.  Although the past couple of days’ moves have been substantially larger than what has been the norm in recent months (Monday’s decline snapped a 71 consecutive trading day streak without a 1% up or down move), compared to these 162 other turnaround Tuesdays with 1% or larger moves, the current scenario is actually on the weaker side in terms of volatility.  Of those past occurrences, Monday’s average decline was much larger at 2.8% and this week’s rally on Tuesday was not even half the size of the average gain of 2.19% on these prior turnaround Tuesdays.

As for the rest of the week, Wednesdays after turnaround Tuesdays have averaged a full-day gain (from Tuesday’s close to Wednesday’s close) of 0.19% which is 11 bps greater than the average gain of 8 bps for all Wednesdays. Thursday is the weakest day of turnaround Tuesday weeks averaging a gain of only 16 bps with positive price action only 51.61% of the time (average for all Thursdays = 4 bps).  Finally, Fridays have typically been the best performing of the three days with an average gain of 27 bps (compared to an average gain of just 5bps for all Fridays).  Additionally, it is the day that most consistently has seen the S&P 500 finish higher. Start a two-week free trial to Bespoke Institutional to access our Chart of the Day and every other report and interactive tool we offer. 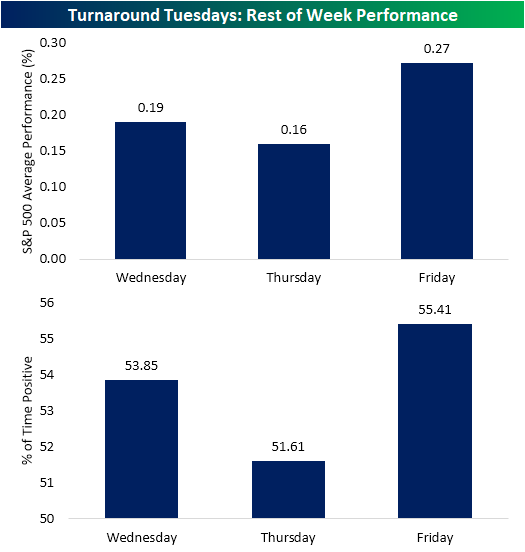