This morning’s release from the Census Bureau on residential construction activity in September provided a double disappointment for investors.  Not only did both Housing Starts and Building Permits come in weaker than expected, but the August reports were also revised modestly lower. The table below breaks down this month’s report by the size of unit and region.  One positive about this month’s headline readings in both Housing Starts and Building Permits stems from the fact that all of the weakness was in multi-family units.  Single-family units starts were actually unchanged relative to August and single-family permits were down less than 1%.  Multi-family starts, meanwhile, were down 5.0% with permits even weaker, positing a decline of 18.3%.

On a regional basis, the Northeast was clearly an outlier with overall housing starts down 27.3% and permits down 20.0%.  The remnants of Hurricane Ida and the massive flooding that encompassed many areas of the region may have been partly responsible for the slowdown in September’s activity. 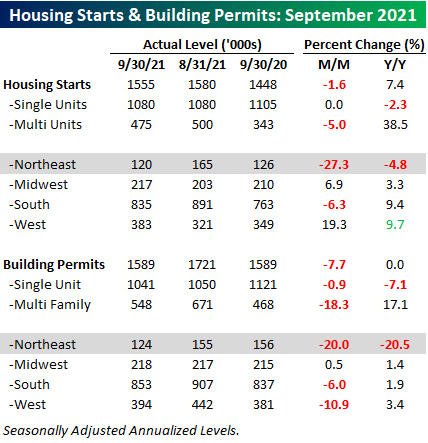 Residential housing data barely even saw a downside blip in the aftermath of the pandemic, and levels of activity surged in the second half of 2021 and early this year.  Signs are increasingly starting to emerge that things are cooling, though.  Whether it’s lack of available supplies, labor shortages, affordability, or just a reversion to the mean after a strong pull-forward of demand, you can take your pick from one or all of the above.  The slowdown is showing up in the 12-month moving averages of both starts and permits which both declined in September for the first time since May 2020, and unless monthly readings start to accelerate again next month, this trend will continue in the months ahead. 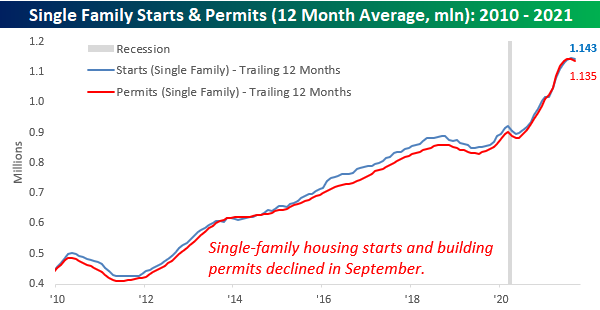 As for how Housing Starts interact with homebuilder stocks, the chart below compares the three-month average of starts to the performance of the iShares US Home Construction ETF (ITB) since 2007.  The two series tend to track each other pretty well (correlation coefficient of +0.87), and you’ll notice that in recent months, the homebuilder stocks have run out of steam just as the level of starts began to stall out. Click here to view Bespoke’s premium membership options. 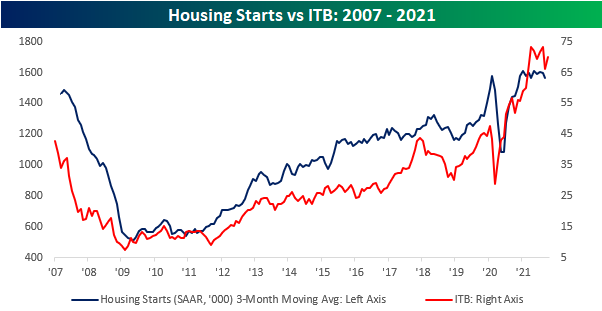