When it comes to monthly retail sales, one trend we have highlighted repeatedly over the years is the shift in American shopping habits from bricks and mortar to online establishments.  Ten years ago, General Merchandise retailers accounted for 14.4% of total retail sales.  At the same time, online sales which had already risen sharply over the years accounted for only 7.9% of total sales.  Fast-forwarding to the present, online retail has continued to surge at the expense of General Merchandise retailers (among others) and now ‘clicks’ account for a larger share of total sales than ‘bricks’.

Another less discussed trend in American shopping habits is the shift from eating at home to eating out.  While there was a time not so long ago when going out for dinner was considered a treat, for a lot of Americans today, home-cooked meals are out of the norm.  The chart below shows the historical share of total sales that both Food and Beverage Stores and Bars and Restaurants have accounted for since 2000.  Twenty years ago, sales at Food and Beverage stores accounted for 13.3% of total sales while Bars and Restaurants accounted for just 9.2%.  As Americans increasingly eat out, though, sales at Bars and Restaurants have risen to 12.56% while sales at Food and Beverage Stores have been drifting lower to the current level of 12.44%.  While both groups have been moving back and forth in recent months regarding which one has the lead in total share, in January, Bars and Restaurants overtook Food and Beverage Stores by the widest margin on record (0.12 percentage points).  In most modern houses, the idea of a formal dining room has become obsolete, and who knows, the way things are going now, in fifty years the idea of a kitchen may sound just as quaint.  Start a two-week free trial to Bespoke Institutional to access our interactive economic indicators monitor and much more. 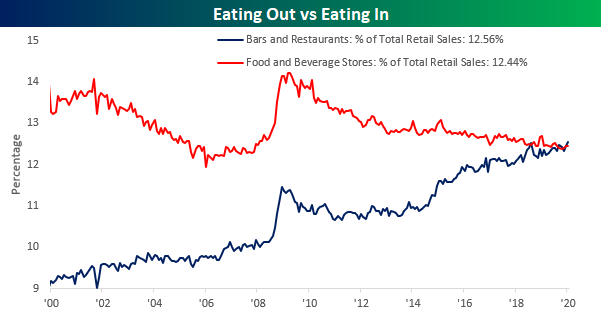