Republicans and Democrats are Polarized but it has been Worse

The full publication of our 2020 Outlook report will be available this Friday (12/20), but below is an excerpt from the “Washington” section, which we published last week.  To view this section immediately and receive the full Outlook report in your inbox later this week, sign up for a Bespoke Premium membership using our 2020 Outlook Special.

Bloomberg’s weekly poll of consumer comfort allows us to see how sentiment breaks down along political party lines.  Below is a chart showing sentiment for Republicans and Democrats using Bloomberg‘s Consumer Comfort reading going back to 1990.  In 2019, Republican confidence stood at some of the strongest levels since at least the 1990s.  Given all of the polarization and butting heads in politics, you might expect the opposite to hold true for the confidence of Democrats. But in 2019 confidence among Democrats actually reached its highest level since 2000, although the upward trajectory has not been nearly as strong as that of Republicans; as could be expected when the opposing party occupies the Oval Office.  The reading for Democrats is much higher now than it was at this point in Bush II’s Presidency. 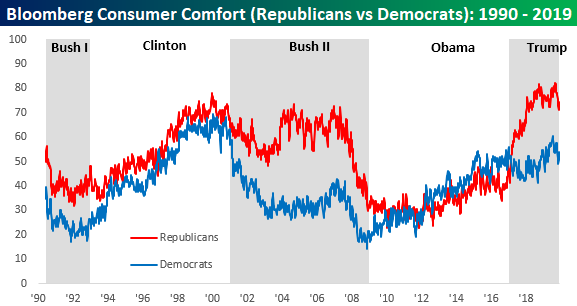 Although both sentiment levels were strong in 2019, the spread between the two leans much more in the right’s favor. Albeit, the spread is also much lower than it was just over one year ago. But even at that peak earlier in President Trump’s term, that is not when Democrats and Republicans were most polarized.  During the George W. Bush administration, the confidence spread reached as high as 45 percentage points. That is a nearly 8 percentage point difference from the recent peak of 37.7 in September of 2018 and about a 25 percentage point difference from the current level of the spread. 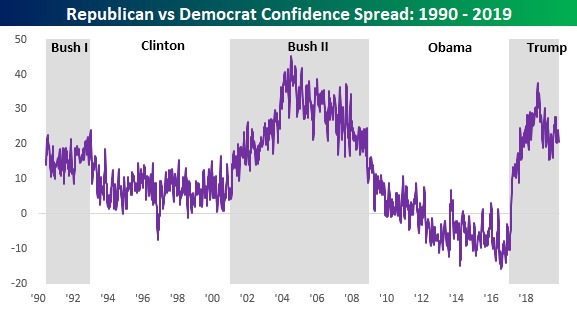