Over the past week, despite boasting massive outperformance on a year-to-date basis, the Technology Sector (XLK) has been the worst performer of the eleven sectors as it has fallen over 2.5% as shown in the snapshot of our Trend Analyzer below. That move has brought it below its 50-DMA. Conversely, the more defensive Utilities sector has risen the most with a 2% gain. That makes Utilities the only overbought sector at the moment.  Right on the heels of Utilities is Communication Services which has risen over 1.75% in the past five days. That move has brought the sector back above its 50-DMA.  Of the other sectors, only Health Care and Financials are in the green over the past few days.

In terms of relative strength, these recent trends of out/underperformance across the different sectors has resulted in a few significant reversals.  In the charts below, we show the relative strength lines of the four sectors that have risen over the past week versus the S&P 500.  As shown, each of these sectors’ relative strength lines have turned higher recently.  For Communication Services, the reversal higher has been sharp and broke a shorter-term downtrend that has been in place only since the end of the summer.  Meanwhile, the trend reversal for the relative strength line for Utilities has been more gradual over the past two months and has broken a longer term downtrend.  The line is now reaching new highs.  As for Financials and Health Care, the outperformance has been more modest, but nonetheless is resulting in these two sectors beginning to break out of their multi-month downtrends that have been in place for most of the past year. At the moment, that breakout has been much more defined for Health Care. 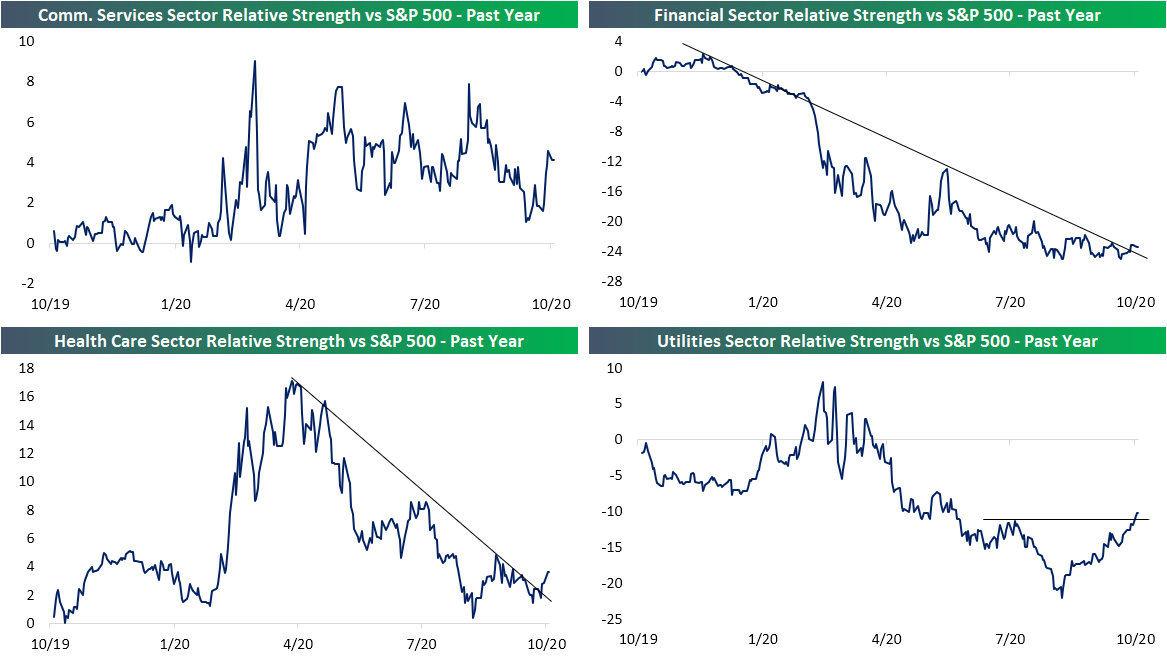 As tumultuous of a year as it has been, one seeming constant has been the outperformance of the Tech sector.  As shown below, the relative strength line of the Tech sector has been in a textbook uptrend essentially all year, but that has been put to the test over the past month.  Earlier this month, the line put in a lower high, and in the past few days, it has broken that uptrend.  Click here to see our sector relative strength charts on a daily basis with a two-week free trial to Bespoke Premium. 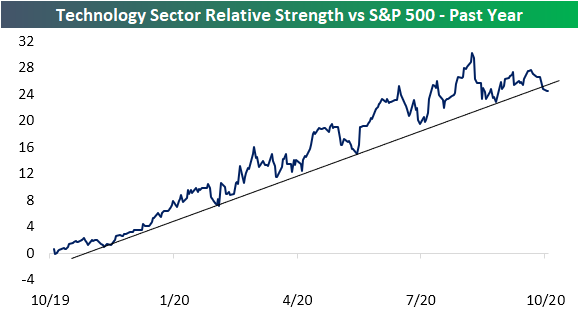