Record Triple Plays and the Reverse

We have frequently been making note of the extraordinary beat rates for earnings this earnings season. As such, companies are reporting triple plays at an astounding rate.  An earnings triple play is when a company beats estimates on both the top and bottom lines while simultaneously raising guidance. These can be taken as a sign of a solid fundamental picture for a stock.  We keep track of the 100 most recent triple play, and over a third of that list reported within the last 24 hours!  We are currently in one of the busiest 24 hour periods of earnings season with 238 companies having reported last night after the close and this morning.  Of those, 38 reported triple plays. On a slightly longer time horizon, in the charts below we show the percentage of stocks reporting triple plays over the past 90 days on a rolling basis.  In the past 3 months, 12.18% of earnings reports have been a triple play.  In the history of our Earnings Explorer database, there has never been a period with such a massive share of stocks reporting these types of results.

We also thought it would be worth taking a look at the inverse of this. In the second chart below we show the percentage of stocks reporting a reverse triple play: miss on both the top and bottom line while lowering guidance.  While there has been a small uptick in this reading over the last few days, it is still at a historically low 0.54% of stocks reporting.   That is just 10 stocks over the past three months! When it comes to the recent uptick, this month there were only two reverse triple plays and both reported in the past day: Fastly (FSLY) which reported last night and FTI Consulting (FCN) releasing results this morning.  In today’s session, both stocks are getting hammered with FSLY down over 6% and FCN down more than twice that.  When the number of companies reporting triple plays is at record highs, you don’t want to be one of the companies reporting a reverse triple play. Click here to view Bespoke’s premium membership options for our best research available. 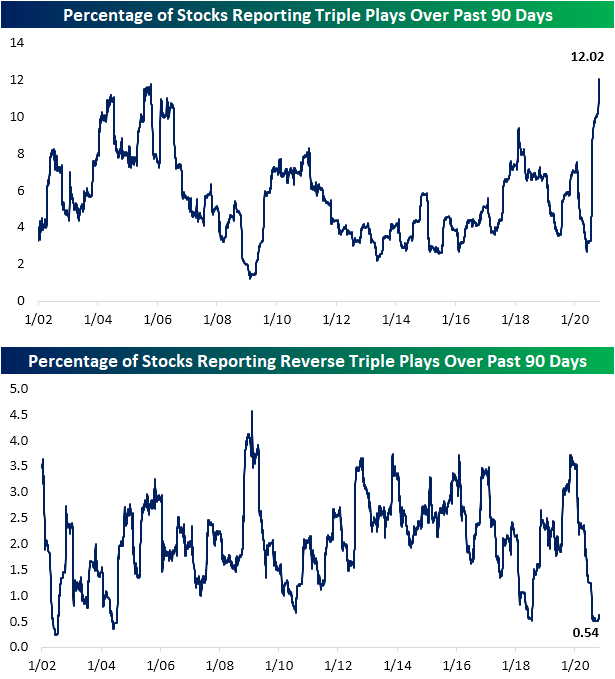