As mortgage rates continue to press higher with Bankrate.com’s 30 year national average for a fixed rate loan hovering well above 7%, high frequency housing data continues to show no signs of relief. The latest mortgage purchase reading from the Mortgage Bankers Association released this morning showed the lowest level of applications since the start of 2015.  As we mentioned in today’s Morning Lineup, that would imply further significant declines in new and existing home sales data to come. 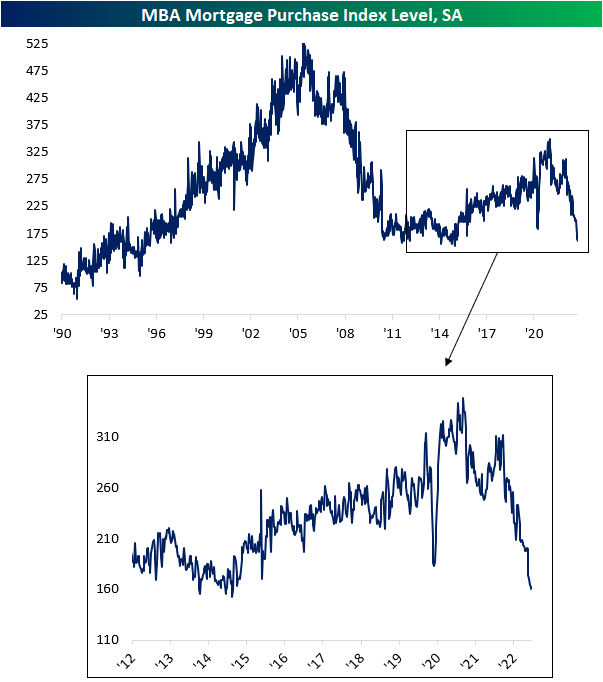 Refinance applications are even worse. Given homeowners would be refinancing at some of the highest rates of the past few decades, refinance applications were up modestly week over week, although that is far from enough to lift it off of the lowest levels since August 2000. 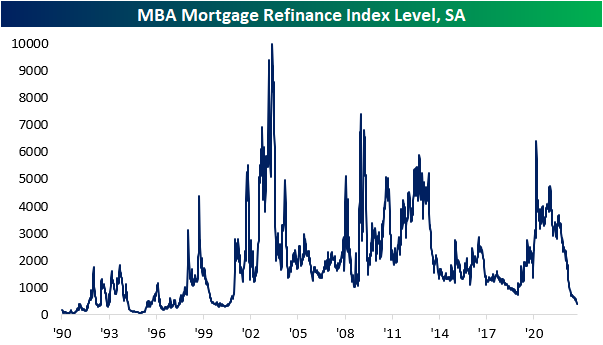 On a non-seasonally adjusted basis, purchases tend to peak in the late spring followed by a gradual decline through the end of the year. While mortgage activity has fallen off of a cliff this year, the drop has followed the usual seasonal pattern.  What is amazing about this year is just how large of a drop that has been.  Whereas 2022 started with purchase apps coming in at some of the strongest levels of the past decade for the comparable weeks of the year, the opposite is true today. 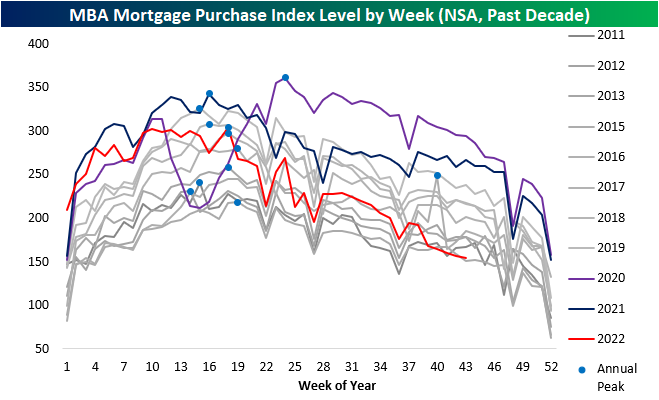 Although purchases have followed their seasonal pattern, the chart above does not do justice in showing how large of a decline it has been off of the annual peak.  It has been nearly half a year (25 weeks) since applications hit their seasonal high, and in that time, purchases have been essentially cut in half.  Relative to the 25 weeks after each other annual high since 1990, 2010 was the only other year in which there was a similar decline.  However, that year comes with a caveat that the expiration of special homebuyer tax credits lent to a particularly strong home-buying season. Similarly, a change in mortgage disclosure rules in the fall of 2015 resulted in a seasonal peak occurring unusually late in the fall of that year, so 25 weeks later extended out to the following year.  Given that, purchases were actually higher in the 25 weeks later; the only year in which that is the case.  In other words, caveats aside, no other year in the history of this data has seen as sharp of a decline in homebuying/mortgage origination activity as this year. Click here to learn more about Bespoke’s premium stock market research service. 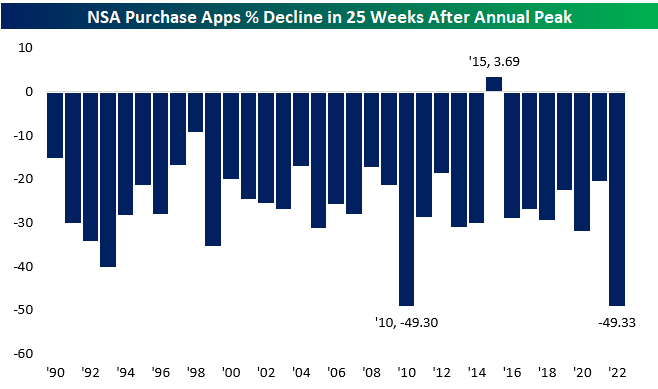