By just about all accounts, Monday’s breadth was extremely weak for a day on which the S&P 500 rallied 0.84%.  In terms of sector performance, just three sectors were up over 1%, while four declined more than 1%.  If you account for rounding, the 0.96% decline for Consumer Staples would make it five! 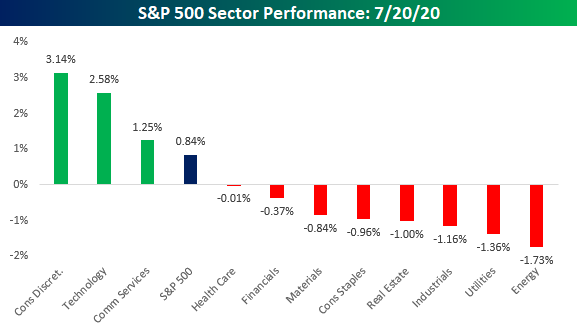 The chart of sector performance doesn’t even tell the entire story.  While Consumer Discretionary was up the most yesterday at +3.14%, when Amazon.com (AMZN) comprises more than a quarter of the entire sector, it’s 8% rally can mask a lot of underlying weakness.  The chart below shows the percent of stocks in each sector that finished the day in positive territory.  As shown, barely a third of Consumer Discretionary stocks were even up yesterday!  Technology and Communication Services were the only other sectors that outperformed the S&P 500 yesterday, and while breadth was extremely positive in tech-land, in Communication Services things weren’t much better than they were in the Consumer Discretionary sector.  Besides Technology, Health Care was the only other sector that managed to see more than half of its components finish the day in positive territory. 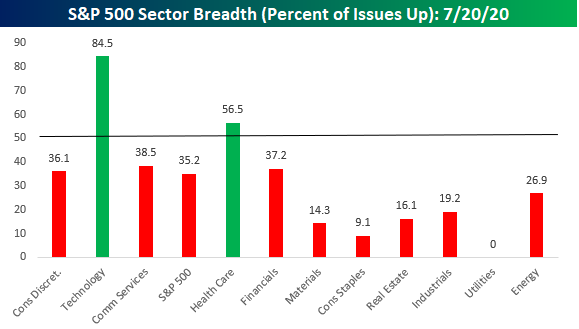 Looking at breadth among sectors can show a bit of a misleading picture as so much market cap is concentrated into just a few sectors, while four other sectors (Energy, Materials, Real Estate, and Utilities) all have weightings of 3% or less in the S&P 500.  Broadening out the picture a bit more, the chart below breaks down Monday’s performance by Industry Groups.  At this level, breadth was still weak on Monday but not as bad as the picture on the sector level suggests.  While five industry groups finished the day up over 1%, there were still seven that finished the day down over 1%.  Still a large number, but not quite as extreme as the sector numbers would suggest.  Like what you see? Click here to view Bespoke’s premium membership options for our best research available. 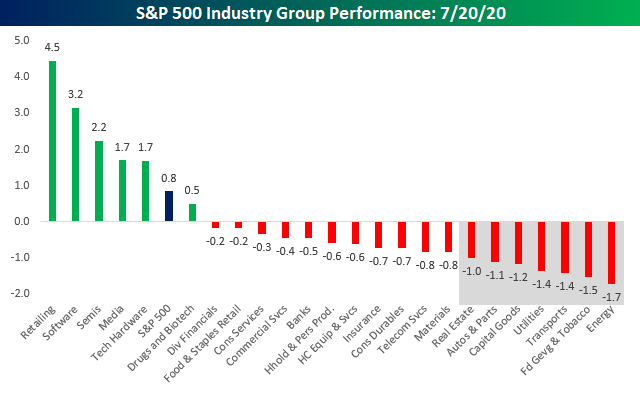