Rates Around The World

Each Wednesday, Bespoke Institutional subscribers receive an update on fixed income markets in the US and around the world in our Fixed Income Weekly.  This week, we took a look at short-term rates in the US relative to the rest of the world, with some surprising results.

With the sudden reversal of US monetary policy to the zero lower bound in response to COVID, the widening gap between US short-term rates and the rest of the world has narrowed and is now stable just a bit above zero.  It’s interesting to note that unlike the 2009-2016 period when the level of US rates and the level of rest of world rates tended to move in opposite directions, since the last tightening cycle began in earnest, US rates and rest of world rates have moved almost in lock step.  In other words, monetary policy expectations have essentially been globalized. 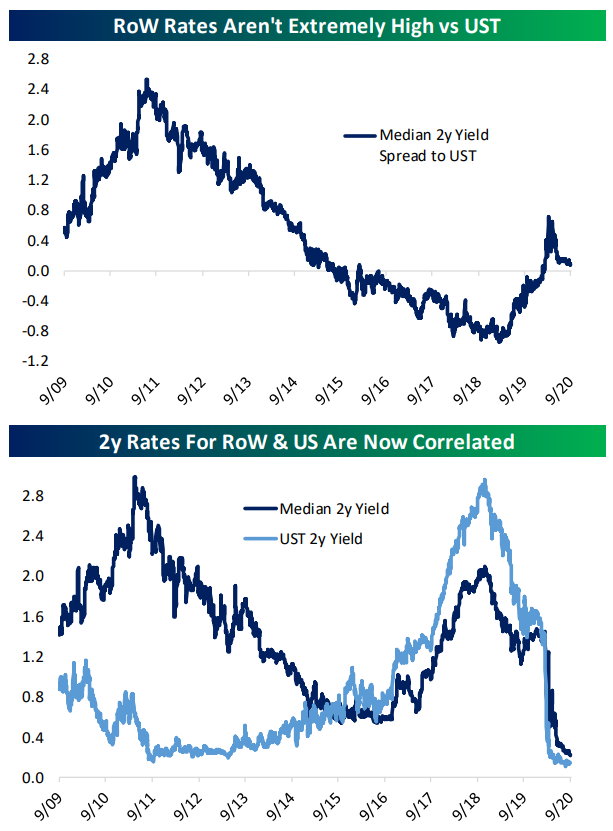 At the same time, an interesting pattern is visible within the rankings of spreads to US Treasuries among 2 year local currency government bonds for the countries that we include in our Global Macro Dashboard.  In the table below, we show rankings of spreads to UST by country 10 years ago, 5 years ago, and now.  We’ve added four basic geographic regions: Europe (developed), the Anglosphere (developed), East Asia (emerging), and other EM (emerging).

As shown, these economies have started to cluster more on a geographic basis.  European rates are uniformly among the lowest spreads to US (other than Norway), East Asian rates are more clustered, and other EM rates are clustered at the high end.  Click here to start a free trial and receive our Fixed Income Weekly for the next two weeks. 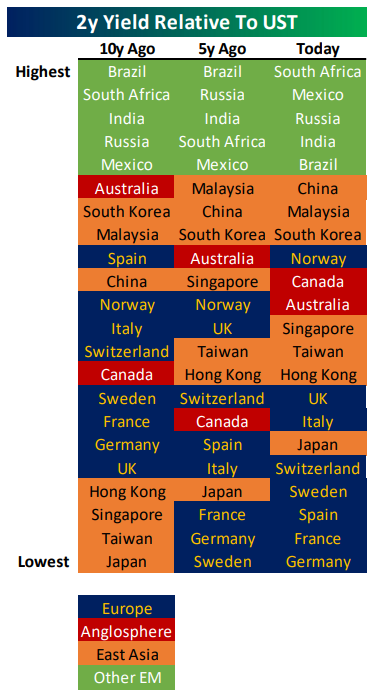