Rangebound on Both Sides of the Atlantic

Everyone here is well aware of the fact that equities have been stuck in what seems like an endless trading range where the S&P 500 has failed to break out meaningfully to new highs.  What some investors may not be of cognizant of is the fact that over in Europe, the benchmark STOXX 600 has also been stuck in a trading range of its own. While the index peaked at higher levels in 2015, it subsequently fell over 25% during the global sell-off in late 2015/early 2016.  From those lows, the STOXX rallied more than 30% for the next 15 months.  Since May 2017, though, the index has been stuck in a range and unable to meaningfully break out to new highs.

This year’s performance for the STOXX 600 has been a continuation of the holding pattern that the index has been stuck in since 2017.  Earlier today, it looked as though we were getting close to a breakout as the index hit a 52-week high, but late in the European session equities sold-off nearly 1% from the intraday highs finishing near the lows of the day. Oh well. Maybe tomorrow.

What bulls in Europe are hoping is that today’s late-day sell-off isn’t a repeat of what happened on July 25th.  Back then, we saw a similar-looking breakout, but like today, the gains didn’t hold and the STOXX 600 reversed over 1% and finished near the lows of the day.  From the high on the day of that failed breakout in late July to the August lows, the STOXX 600 went on to fall nearly 9%.  Start a two-week free trial to Bespoke Institutional to access our actionable research and interactive investment tools. 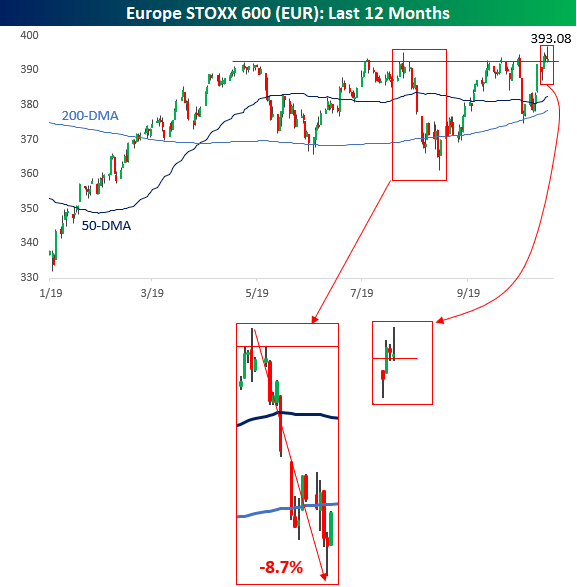