Like an old pair of “quitters” that keep falling down because their elasticity is shot, the market has had its own trouble staying up over the last few trading days.  Today isn’t over yet, but if the S&P 500 finishes around current levels it will mark the fourth straight day of finishing down at least half of one percent from its intraday high.  Compared to the three days before, today’s pullback from an intraday high has actually been pretty mild up to this point.  Following Monday’s 2%+ decline from the intraday high shortly after the open, yesterday, the S&P 500 traded down close to 1% from its afternoon high.  These two reversals followed Friday’s late-day sell-off when the S&P 500 finished the day down 0.75% from its intraday high. 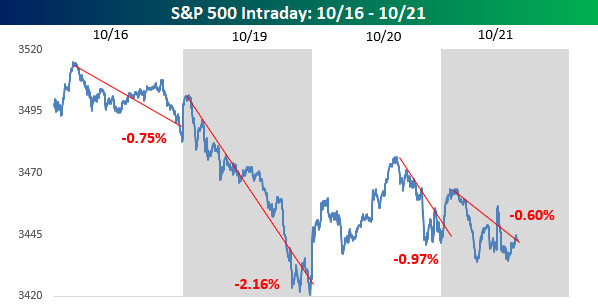 While it’s disheartening to see the market erasing early gains as the day goes on, it’s helpful to put the last four trading days into perspective.  Over the last 25 years, it hasn’t been uncommon for the S&P 500 to finish the day down at least 0.5% from an intraday high for four days in a row. The current streak, if it holds, would be the 158th such streak of four or more days.  That works out to more than six a year.  There have also been a number of streaks that were much longer than the current one.  In fact, it was only a month ago that the S&P 500 went 11 straight days of finishing the day down at least 0.5% from its intraday high, and besides that streak, there have been five other streaks that spanned ten or more trading days.  Start a two-week free trial to Bespoke Premium for instant access to our premium research and interactive tools! 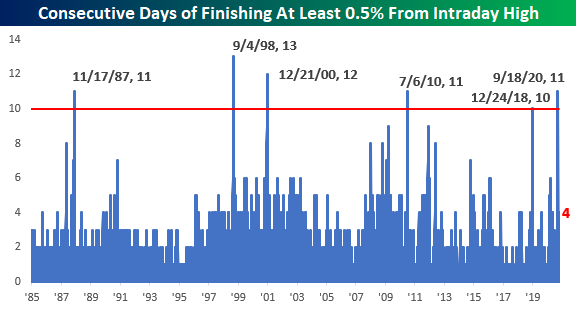