Markets officially closed the books on the third quarter today and based on where things stood at the end of August, equities finished the quarter in considerably better shape than most people would have expected.  Think about it. At the end of August, we had just seen a month of major volatility heading into what has historically been the worst month of the year for equities, but thirty days later, the S&P 500 finished the month in positive territory enough so to scratch out a positive return for the quarter.  The primary benchmark for US large-cap stocks (SPY) is up 20% YTD through the first nine months of the year for the first time since 1997.  Besides the S&P 500, every major index ETF we track in our Asset Class Performance matrix had a gain in September.  For the quarter, only three ETFs (mid and small-cap focused) were down, while two other ETFs (Nasdaq 100 and the Russell 1000) have logged YTD gains of 20%+.

Value was the big winner in September as those ETFs were all up around 5% this month.  YTD, though, there’s a bit of a disparity; while large and mid-cap growth ETFs are outperforming their value peers, small-cap growth is actually underperforming small-cap value by a wide margin.

In terms of sector returns, Health Care was the only one to finish September in the red, and it is now the worst-performing sector YTD.  In addition to Health Care, the only other sector that is up less than 10% on a YTD basis is Energy.  Heading into the quarter Energy was up over 10%, but a 6% decline in Q3 erased more than half of its YTD gains.  On the upside, the biggest Q3 gainers were Utilities and Financials. Technology slightly underperformed the broader market in September, but it still outperformed the S&P 500 for the quarter padding to its gaudy 30%+ YTD performance numbers.  The fact that Technology (+31%) and Utilities (+25%) are the two leading sectors YTD shows just how unique the year 2019 has been.

Moving outside of the US, Hong Kong was the only country ETF that was down in September, and it was far and away the worst-performing sector in Q3 with a decline of over 12%.  While US equities were broadly positive in Q3, international markets were much more mixed on a dollar adjusted basis with eleven of the fourteen country ETFs listed down on the quarter.  Year to date, though, international returns have also been up across the board, although again, most have underperformed the S&P 500.

In the commodities space, even after dropping more than 7% in September, Silver was up over 11% in Q3.  Gold saw similar directional moves, although not nearly to the same degree.  In Energy, the wide disparity in performance between Oil and Natural Gas remains in place as their directional returns are in the opposite direction YTD, QTD, and MTD.

Outside of an extraordinary August, treasuries gave back some of those gains in September with the biggest declines at the long end of the curve.  Year to date, though, long-term treasuries are still looking at returns of just under 20%, or a percentage point less than the S&P 500.  Start a two-week free trial to Bespoke Institutional for full access to our research and market analysis. 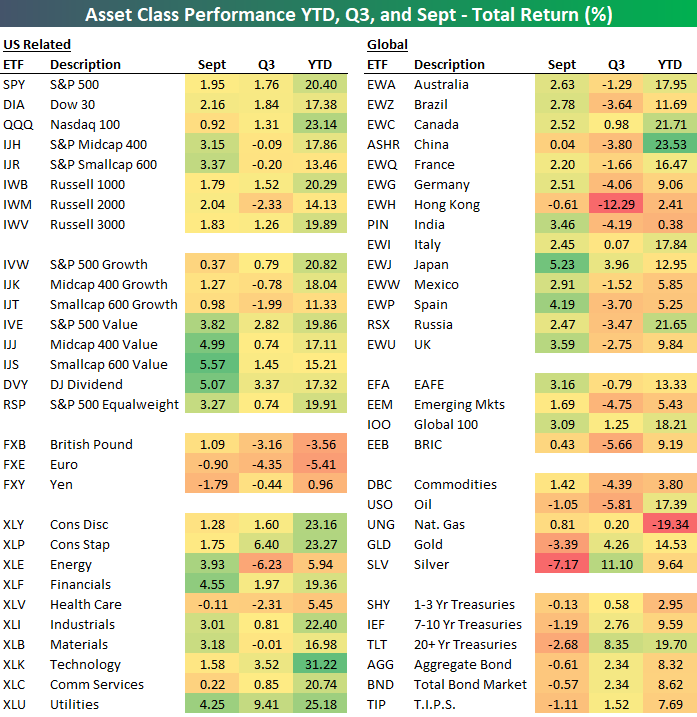