Through most of the second half of the year, a series of mass protests in opposition to Chinese extradition legislation has been consuming Hong Kong.  While smaller-scale protests have been taking place since the early spring, things really began to ramp up in June when hundreds of thousands took to the streets. In the more than three months that have passed since then, some of the effects are beginning to be seen in the country’s economic data that we track in our Global Macro Dashboard.  Markets were the quickest to respond as the country’s Hang Seng Index has fallen roughly 5% since the start of June.  The HSI is now in a defined downtrend over the past couple of years and recently has been making its way towards support at last year’s lows. 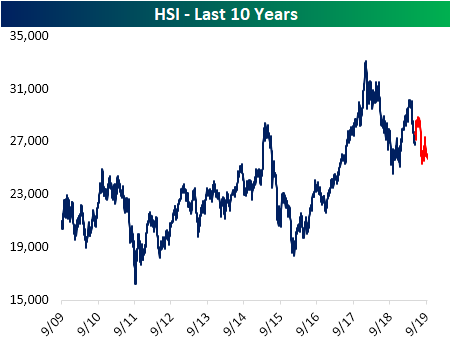 Hong Kong retail sales have tanked since protests began.  In the months leading up, retail sales had been contracting year-over-year for four consecutive months. The reading for May came in at -1.4%, but once protests took effect the following month, retail sales collapsed to a -6.7% growth rate. Conditions have only worsened from there as retail sales contracted 23% YoY in August. That is the worst contraction in the history of the data going back to 2006, surpassing the previous low of -20.6% in February 2016. 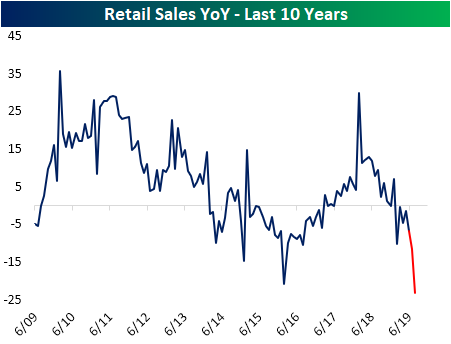 Likely as a result of people taking to the streets rather than showing up to work, the unemployment rate has begun to tick higher over the past few months.  For the entire year before the protests began, Hong Kong’s unemployment rate held steady at 2.8%; the lowest level of the past decade. But the July release showed the rate has risen 0.1% to 2.9%. That was the first increase of any kind since the one month blip in July of 2017.  Start a two-week free trial to Bespoke Institutional to access our Global Macro Dashboard as well as our Economic Indicators Database and much more. 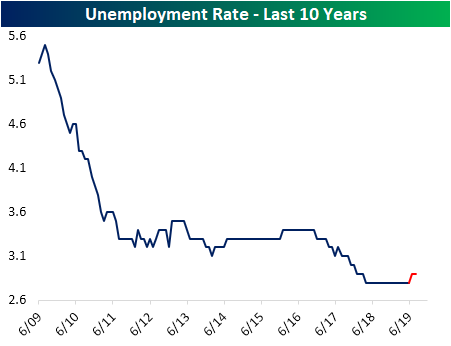