This morning’s ISM report on the manufacturing sector indicated continued improvements in the month of July.  July’s rise in the headline number to 54.2 from 52.6 marked back to back months with expansionary readings for the first time since January and February of this year.  It was also a third consecutive month in which the index has risen. That leaves it at its highest level since March of last year.

Most of the sub-indices of the report are likewise now showing expansionary readings.  As shown below, most indices have seen continued improvements with the increases in July being in the upper quartile of historic readings; many of these were actually in the upper decile. Nearly every index is now showing expansionary readings with Backlog Orders, Export Orders, and Import Orders all rising above 50 in July.  At the moment, the only indices to remain in contraction are those for inventories and employment. These are also at the lower end of their historical ranges.  For the indices for inventories, the contractionary readings are not necessarily a glaring negative though as they come off of expansionary readings (rising inventories) in recent months.

Although the numbers are providing a fairly optimistic outlook for the country’s manufacturing sector, more anecdotally, the comments in this month’s survey had a decent amount of negativity.  As shown below, several comments made mention that even if improved, demand is still down dramatically and uncertainty remains higher.  On the other hand, some respondents like one from the Computer & Electronic Products industry and the Food, Beverage, & Tobacco Products industry are reporting that demand has either returned to normal or is better than a year ago. 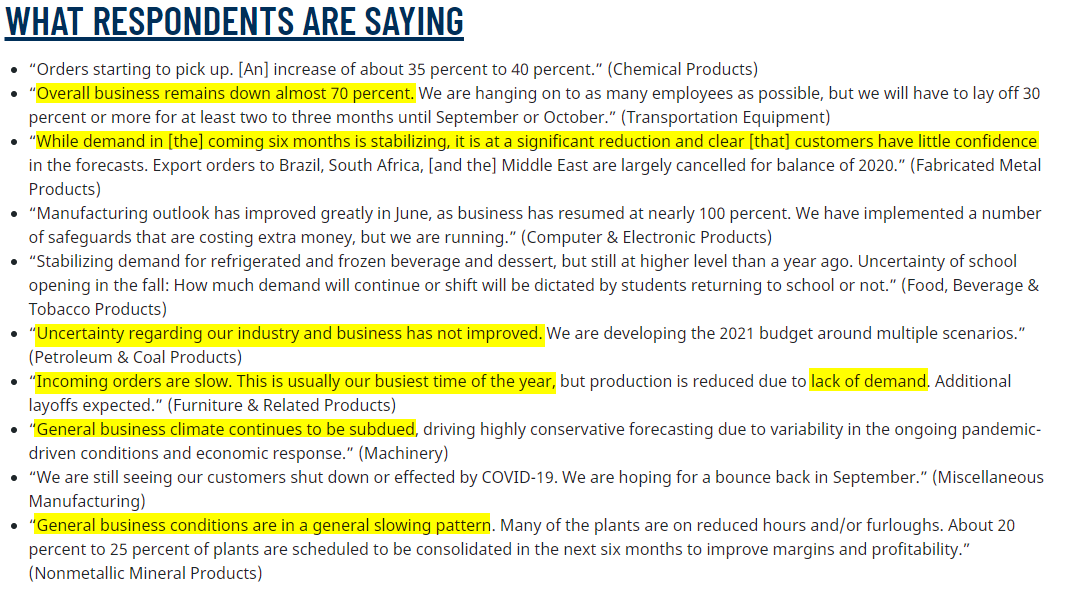 Increased demand, and as a result increased production, has been a major boost to the headline number.  As shown below, the index for New Orders saw another huge increase in July rising 5.1 points to 61.5.  Excluding last month’s extreme rise of 24.6 points, which was the largest monthly gain on record, you would have to go all the way back to July of 2013 to find another time that the index for New Orders rose by more. That leaves the index at its highest level since September 2018 while the index for Production is at its highest level since August 2018.  Those improved conditions also appear to be fairly broad with 13 of the 18 industries surveyed reporting growth in new orders and 16 of the 18 reporting growth in production; no industry reported a decrease in production in July.

Stronger demand certainly seems to be the reason for that higher production. Over the past two months, inventories have been building as demand was bouncing back.  This month’s reading of 47 indicated that reversed as inventories began to be drawn upon. Meanwhile, as New Orders pickup, order backlogs are rising for the first time since February. That was the only other month since April of last year in which order backlogs were rising. The index for Backlog Orders is now at its highest level since April of 2019.

Although production and demand has picked up, employment has been left behind.  In other words, businesses appear to be ramping up output without the help of additional labor.  Granted, that could change as production continues to pick up.  Of the 18 manufacturing indices, ten reported a decrease in employment (again many of these also reported an increase in production) while only five reported growth: Apparel, Printing and Related Support Activities, Furniture, Plastic and Rubber, and Computer and Electronic Products.  While improved from the past few months, the index for employment remains low at 44.3.  Click here to view Bespoke’s premium membership options for our best research available. 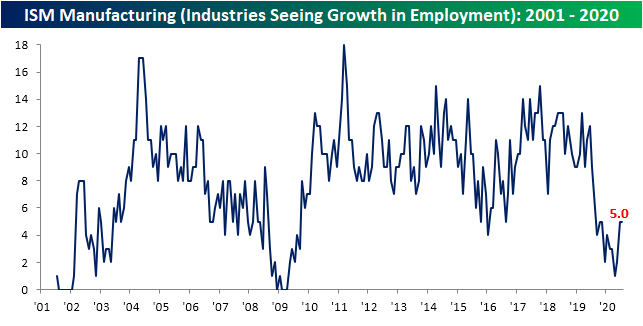