Price-to-Earnings Around the Globe

Every Wednesday, we release our Global Macro Dashboard, which tracks major data economic and market data points from 23 of the largest global economies. One stat we include is each country’s P/E ratio for their respective equity markets. India continues to have the highest valuation with a P/E of 26.9. That compares to the US which is now valued at 20.1x earnings and the fifth-highest of the countries tracked. This is also higher than the average P/E for all of these countries which is 17.02. Other countries with notably high valuations include Norway, Germany, and Switzerland. Russia, on the other hand, has by far the lowest valuation of just 6.41, the only country with a P/E in the single digits. 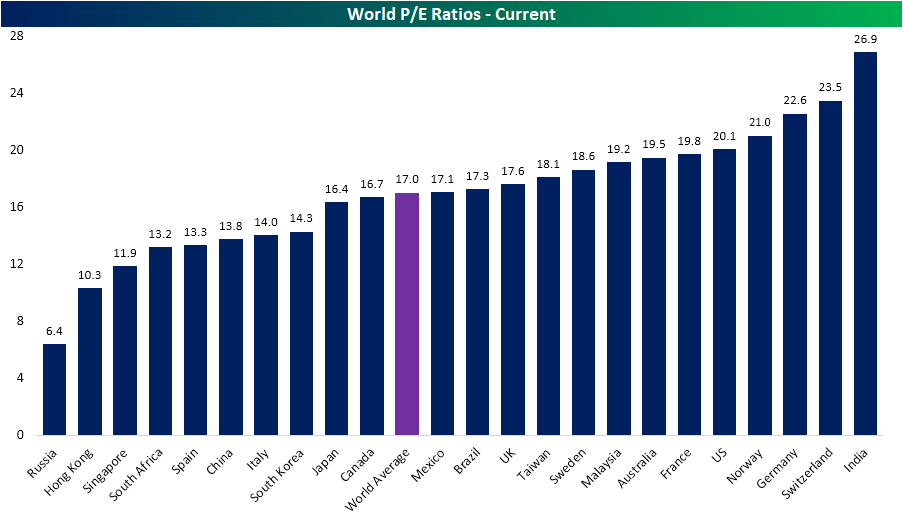 Compared to where things stood six months and one year ago, valuations around the globe have collectively risen. The world average now stands at 17.0 versus 16.4 at the end of April and 15.1 last October. While the average multiple has increased, only 60% of the countries tracked have seen valuations increase over the last 6 months while 74% have risen over the past year. Germany’s P/E has actually risen the most of these having jumped to the third-highest P/E of all countries (22.6). Six months and one year ago, Germany (EWG) actually had a below-average P/E. Multiple expansion can come in the form of higher prices and/or lower earnings, and in the case of Germany, the culprit has been weaker earnings.

Even though it currently continues to hold the number one spot on the list, multiples in India (INDA) have actually fallen over the past six months from 30.4 down to the current level of 26.9. Given INDA has fallen over 2.5%, this lower valuation makes better sense than the jump in Germany. Similarly, in regards to the US, the ratio rising to over 20 from 19.28 comes is a result of the S&P 500’s 3% gain as earnings have been pretty flat.

Compared to one year ago, it is a similar story. As is the case now, Russia and Hong Kong have had the lowest valuations over the past six months and one year, although they have risen in that time.  The valuation for most countries have risen over the past year. 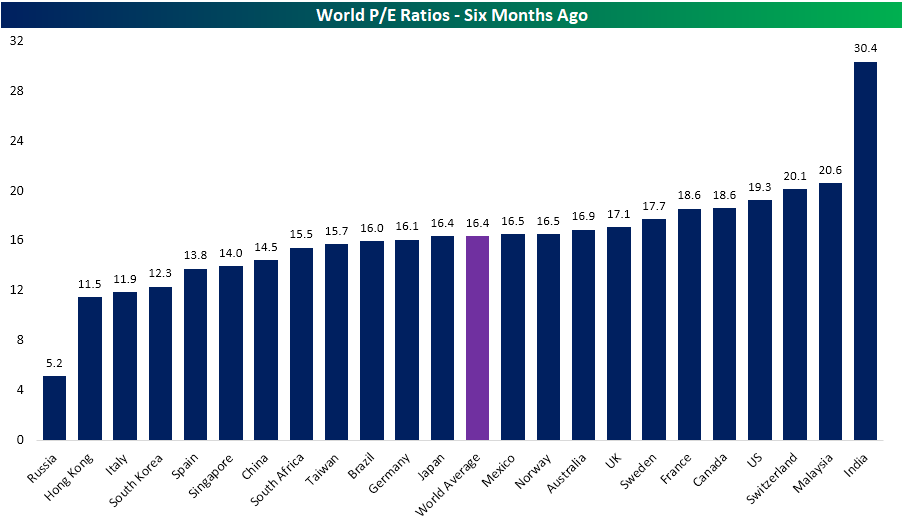 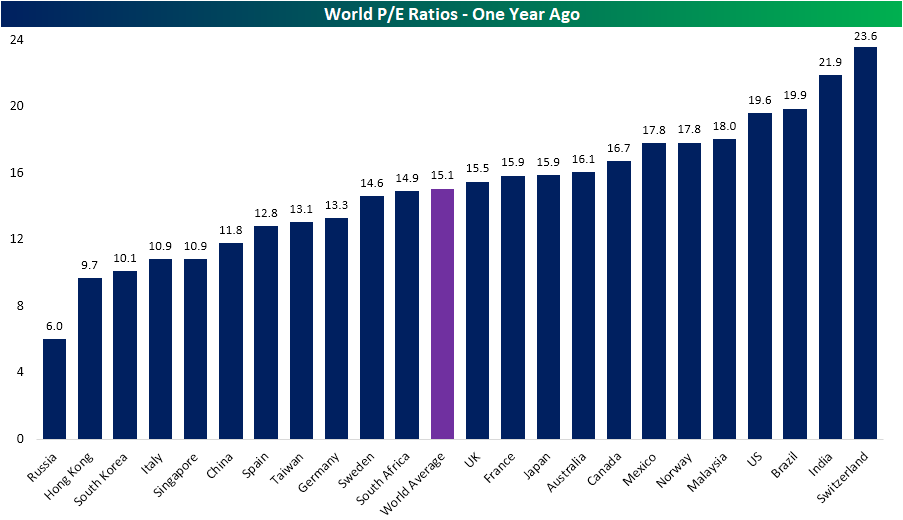 Summarizing in the table below, there is a bit of a mixed picture in regards to how P/E ratios have changed with performance over the past half-year and year.  One would expect the ratio to increase as equities rise, but that has not necessarily been the universal case.  For countries like Norway (ENOR) and Germany (EWG), valuations have risen the most in spite of equity markets that have experienced declines over the past six months (Norway’s declines being the fourth-worst of the 23 countries) and only modest gains in the past year.  On the other hand, Russia (RSX) has the lowest valuation of all countries despite having outperformed dramatically over the last six to twelve months.  RSX has also not seen any major surge in valuation in that time as earnings have kept up with prices. Meanwhile, other countries like India (INDA), Switzerland (EWL), Taiwan (EWT) and the US (SPY) have seen this dynamic react more in line with what could be expected. Start a two-week free trial to Bespoke Institutional to access our Global Macro Dashboard and much more. 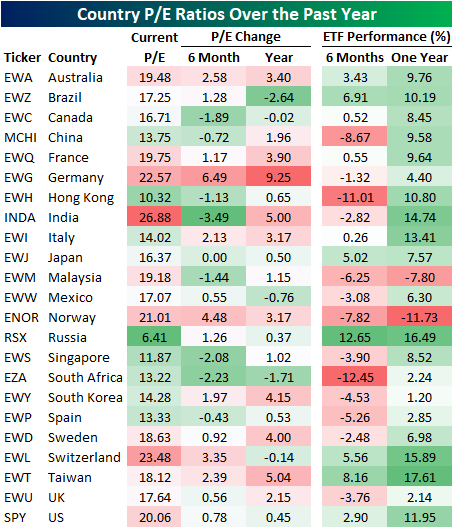