It’s Inauguration Day, and so far equities are welcoming in the new administration with a gain of more than 1% for the S&P 500 (SPY).  As to how that compares to the first day of past presidencies, in the chart below, we show intraday performance on Inauguration Day since the start of Reagan’s second term in the mid-1980s when our intraday data begins.  Excluded are the inaugurations for George W. Bush’s first term and Obama’s second term considering these fell on days that the market was closed; a Saturday in the case of the former and MLK day for the latter.

The second inauguration for Ronald Reagan was met with the strongest performance for the S&P 500 as the index steadily drifted higher throughout the day to rise 2.28% by the close. With the S&P 500 up over 1% today, it is on pace for the best Inauguration Day performance since then.  On average across all of these days, the S&P 500 has typically traded lower throughout the session with a leg lower in the early morning and another towards the end of the day (second chart).  Breaking performance down by political party, inaugurations for Republican administrations have averaged a move higher with a bit of a dip midday while performance during inaugurations of Democrats has been weaker. Much of this weakness, however, is due to Obama’s first inauguration which came during the throes of the financial crisis. 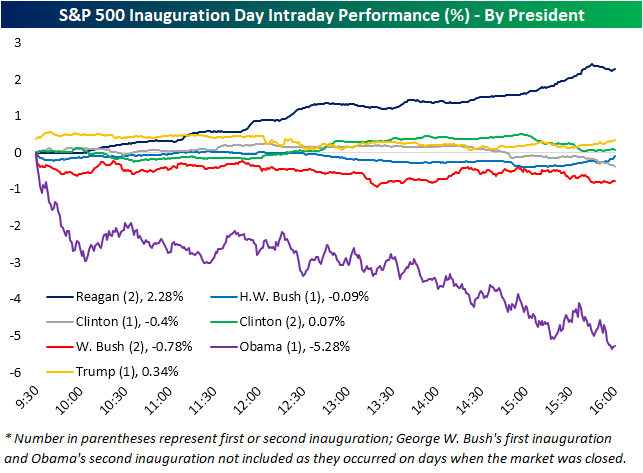 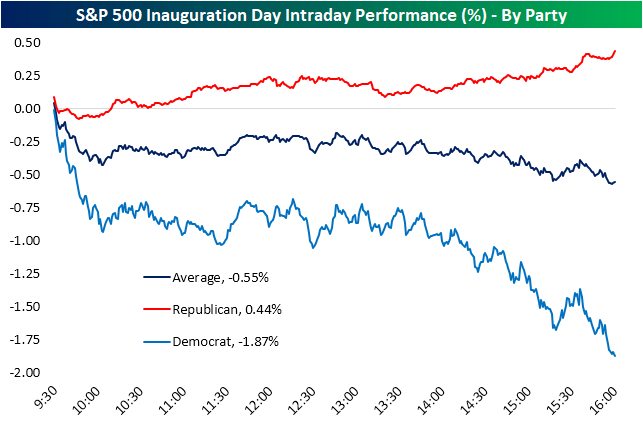 As for the ushering in of a new administration or four more years of the same, performance has also tended to be quite different.  As shown below, a president’s first inauguration over the past few decades has resulted in the S&P 500 dropping an average of 1.36% by the end of the day as the index steadily trades lower throughout the session.  Again, much of this weakness can be attributed to the sharp decline on the day of Obama’s first inauguration. Conversely, the second inauguration of a president has seen the S&P 500 steadily trade higher. Click here to view Bespoke’s premium membership options for our best research available. 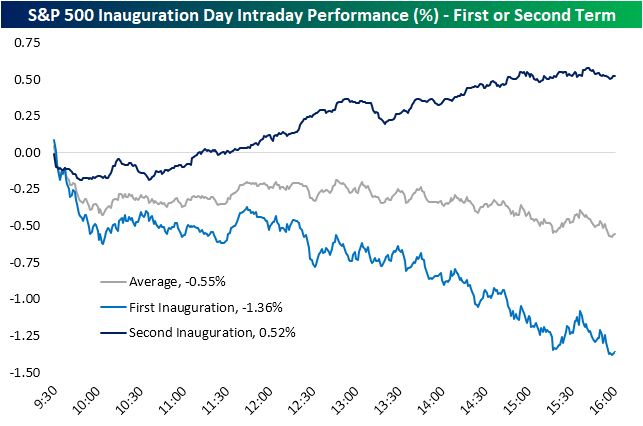