After a strong run in the first months of the pandemic, gold (GLD) has been in a downtrend since the summer erasing most of the past year’s move higher.  While GLD is far from breaking its longer-term downtrend, the past few weeks have at least seen a bit more constructive price action with a potential double bottom forming.  After trading deep into oversold territory in early March, GLD found at least a temporary bottom right around the lows of last sping’s range.  Last Tuesday, there was another successful retest of those same support levels. Since then, GLD has pressed higher and is getting close to breaking out of the past few weeks’ consolidation range. 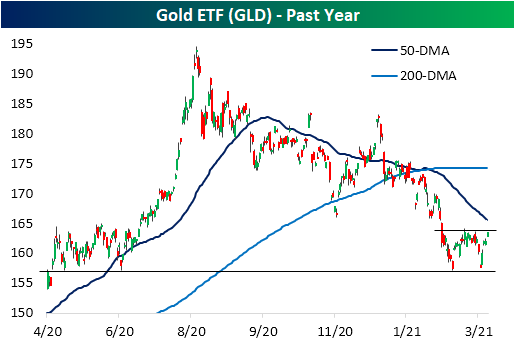 Elsewhere in the precious metals space, silver (SLV) has generally fared better over the past several months.  While it hasn’t been pressing higher either, SLV has more or less been trending sideways since last summer’s high.  Since late February, SLV had been heading back to the bottom end of its range, but like GLD, it recently found some support. SLV took a brief dip below its 200-DMA one week ago which snapped a streak of 217 consecutive closes above its long-term moving average; the third-longest on record since SLV began trading in 2006 as shown in the second chart below. That drop below did not last long though as SLV has since moved back above its 200-day. Now, it is sandwiched between its 200-DMA and 50-DMA; which it had previously failed to move above last month. Additionally, the move higher today is breaking the short-term downtrend that has been in place for most of 2021. Like gold, the overall longer-term picture for silver has a lot of room for improvement, but at least in the near term, there are some positives developing in the past week. Click here to view Bespoke’s premium membership options for our best research available. 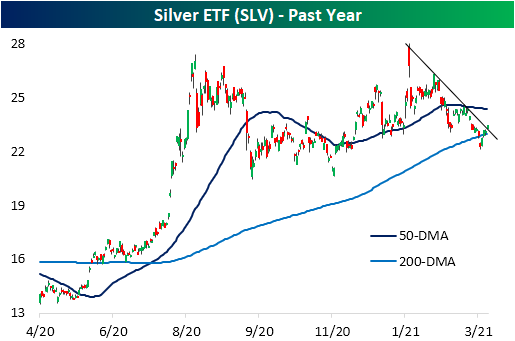