With the S&P 500 fighting to retake the 3000 level this week, bullish sentiment has rebounded after dropping to the lowest level since May of 2016 last week. AAII’s percentage of bullish investors rose from 20.31% last week to 33.62%.  This brings the sentiment level back within its normal range of the past few years although it is still below the historical average of 38.08%. 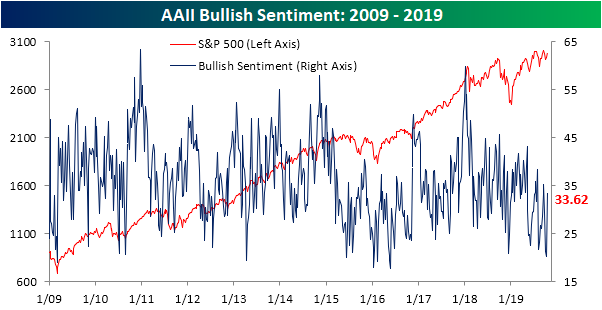 Granted it’s just one week, but the S&P 500 performance following that period was generally positive.  The next week saw a decline of over 1%, but over the next month, 3 months, 6 months, and year the S&P 500 saw stronger than average returns. On the contrary, average S&P 500 performance following all 163 weeks with increases of 10 percentage points or more has not been as strong as it has actually led to underperformance for all time periods other than one week later. 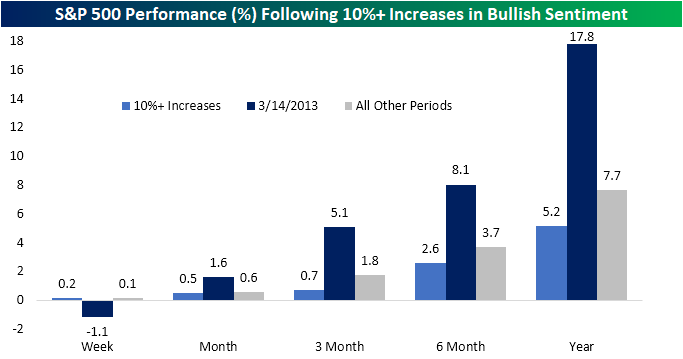 Given the sharp rise in bullish sentiment, bearish sentiment took a nosedive falling to 31.05% from 43.96% last week.  While still slightly above the historical average, this drop brought it back down to Earth from its elevated levels.  As with bullish sentiment, these sorts of large moves in a single week have not been a common occurrence; perhaps even more so for bearish sentiment.  Since the beginning of the survey, there have been 141 weeks including the current week, or 8% of all weeks, where bearish sentiment has seen a double-digit percentage drop. This week’s 12.91 percentage point decline was the largest decline since the 13.4 percentage point move in the second week of this year in the wake of the 2018 sell-off.  So unlike bullish sentiment, it has not been quite as long since we last have seen a similar decline but overall there have been fewer weeks with such a decline. 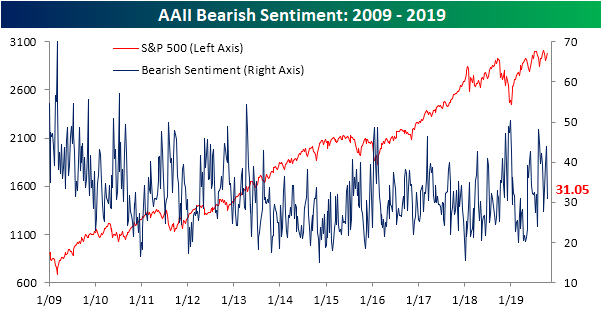 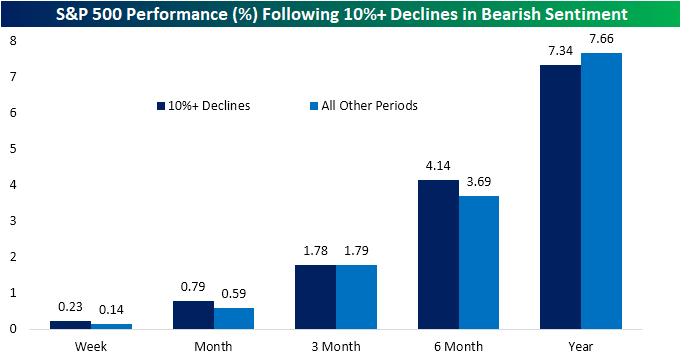 While most of the gain in bullish sentiment came from bears, a small portion also came from those formerly reporting as neutral.  The reading on neutral sentiment fell 0.4 percentage points to 35.33% this week.  Neutral sentiment is now off of its high from the start of October, but it also remains above its historical average of 31.54%. Start a two-week free trial to Bespoke Institutional to access our interactive economic indicators monitor and much more. 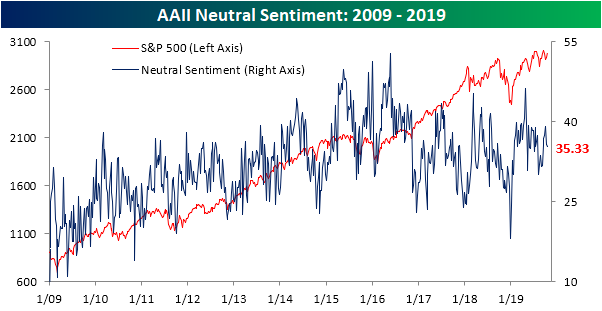