After a strong report on manufacturing in the New York area earlier this week, the Philly Fed Manufacturing report one-upped its neighbor with a blowout report.  While economists were expecting a modest decline in the headline reading from 17.0 to 11.0, the actual reading came in at 36.7, more than triple expectations!  This was the strongest reading for the headline index since February 2017, but before that, you have to go all the way back to December 1993 to find a stronger reading.  Not only that, but relative to expectations, this month’s report was the biggest beat on record (going back to 1998).

Not only was this month’s report strong, but it also followed the January report which also increased 14.6 points on a m/m basis.  Combining the back to back increases together, it was the strongest two-month increase in the Philly Fed headline index since September 1995 and the third strongest two-month gain in the history of the report going back to 1980! 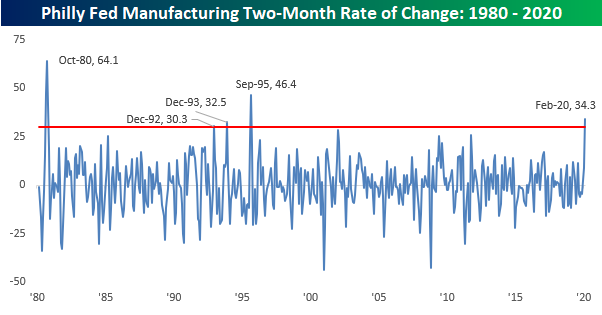 Breadth in this month’s report was also very positive as just two components — Prices Paid and Number of Employees — declined.  Meanwhile, a number of components saw double-digit increases including New Orders, Unfilled Orders, and Inventories.  When it comes to the Philly Fed Manufacturing report, they don’t get much stronger than this!  Start a two-week free trial to Bespoke Institutional to access our interactive economic indicators monitor and much more. 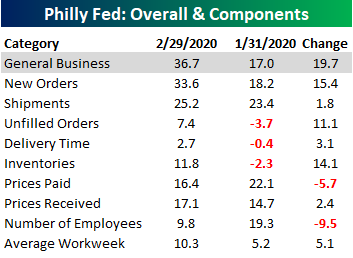