The first regional Fed manufacturing indices for the month of October were released today in the forms of the Philly and New York Fed. By far the stronger reading of the two was from the Third District (Philadelphia). The headline number for the Philly Fed soared 17.3 points to 32.3.  That is the highest level of the index since February’s reading of 36.7 indicating an acceleration in activity after slowing in August. The month over month rise in the index was significant in the top 5% of all readings in the survey’s history.  It was also the 23rd largest increase for any month on record and the largest since June’s record 70.6 increase.

Breadth among the categories of the report remains strong with Inventories the only index that is still in contraction.  Additionally, only the indices for Prices Received and Number of Employees were lower in October.  Four of the indices are also at or near their highest readings on record. Similarly, the month over month increases in the indices for New Orders and Average Workweek were significant in the top 5% of all monthly moves. 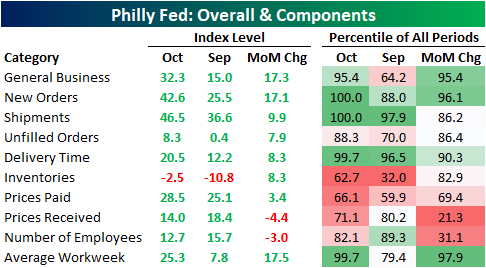 The two indices that reached new record highs in October are those for New Orders and Shipments which rose 17.1 and 9.9 points, respectively. For New Orders, that was the largest one month gain for the index since May and June when it rose over 40 points in both months.  The increase in Shipments was smaller and only in the 86th percentile of all months, but that follows a large 27.2 point increase last month.  In addition to the index for Unfilled Orders also moving to its highest levels since December of last year, the report paints a picture of surging demand for manufacturers in the Third District. 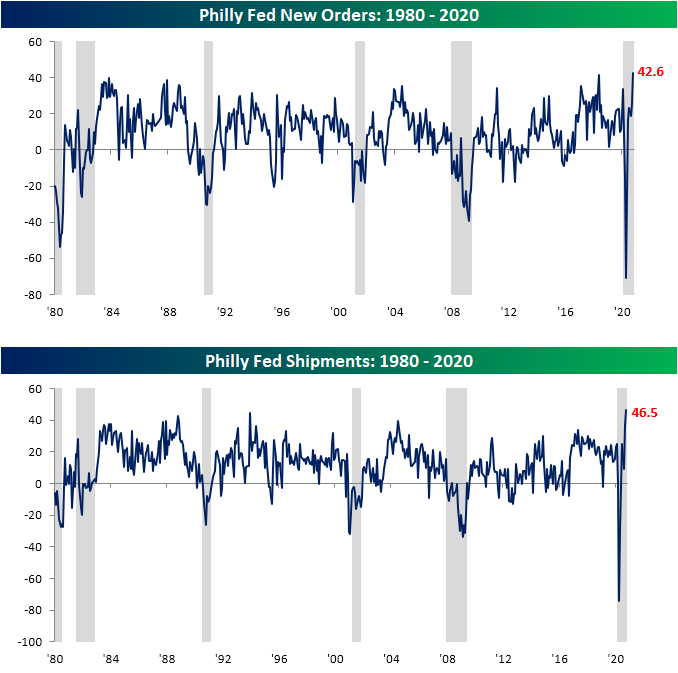 Given that strong demand, inventories continue to be drawn down as indicated by the contractionary reading in the corresponding index.  Granted, the October reading was not as extreme as recent months given the 8.3 point increase MoM.  That is the fourth month in a row with a contractionary reading. Additionally, businesses are reporting historically long lead times as the index for Delivery Times has risen to its highest level in three years. That is also the second-highest reading on record. In other words, businesses continue to draw on inventories to meet strong demand, though there do appear to be some supply chain issues as delivery times have exploded higher.

Firms also continue to expand hiring to meet demand as the index for Number of Employees has remained positive at 12.7.  That was in fact lower than the 15.7 level last month but is still consistent with more businesses reporting raising rather than lowering employment.  Meanwhile, the index for Average Workweek ripped higher to 25.3 from 7.8. Like the index for Delivery Times, that is the second-highest reading on record behind May of 2018’s 32.7.Click here to view Bespoke’s premium membership options for our best research available. 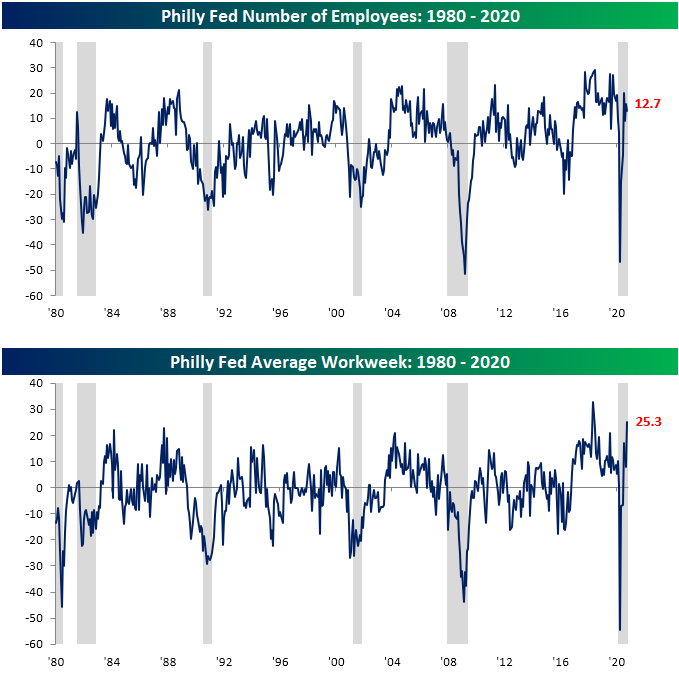