Philly Fed in a Funk

On the back on Monday’s weaker Empire Fed survey, today’s release of the Philadelphia Fed’s Business Outlook Survey similarly showed a slowdown in activity during August. The headline index fell 7 points to 17.2. While that is a third consecutive expansionary reading, it also marked back to back declines. That means that the region’s manufacturing sector has continued to grow, but at a decelerating pace in the past two months.

Like the headline number, many of the individual categories also remain in expansion territory but were lower than last month.  The only readings to rise month over month were the indices for Delivery Times, Inventories, and Prices Received. Inventories as well as the index for Unfilled Orders were the only ones to be in contraction in August. 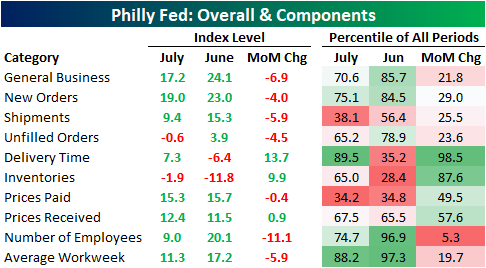 Demand continues to improve with both the indices for New Orders and Shipments showing another expansionary reading in August, but both were also lower indicating demand did slow somewhat. While the index for New Orders remains at a healthy level historically, in the upper quartile of all readings since 1980, Shipments are at a more muted level in just the 38th percentile.

As for employment metrics, there was a slowing in the Number of Employees hired in the region with that index falling from 20.1 to 9.  That 11.1 drop was the biggest change of any sub-index this month and with respect to that index, this month’s decline was in the bottom 5% of all monthly changes. Not only did the index for Number of Employees fall, but so did the index for Average Workweek, although it still remains in the upper end of its historical range. Start a two-week free trial to Bespoke Institutional to access our interactive economic indicators monitor and much more. 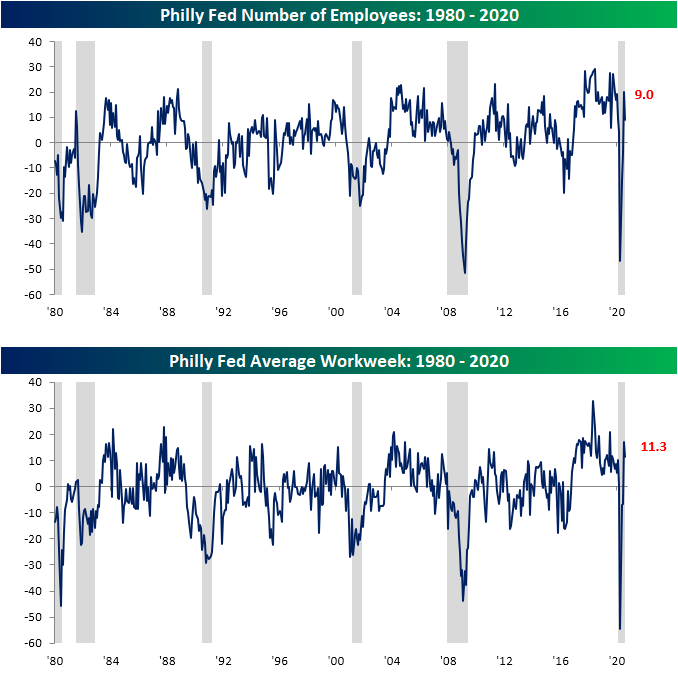