Unlike its neighbor to the north, the Philadelphia Fed Manufacturing Report lost a bit of steam in September.  Economists were expecting the headline index of General Business conditions to remain unchanged at 17.5, but the actual level showed a modest decline to 15.0.  Nothing to get alarmed about, but still weaker than expected.  Even at current levels, though, it’s worth pointing out that September’s reading was still above the predominant levels we were seeing in the year leading up to the COVID outbreak.

Breadth in this month’s report was also positive.  Besides the index of General Business Conditions, the only other indices that declined on a m/m basis were Inventories and Average Workweek.  On the upside, the biggest gains were seen in Shipments and Prices Paid.  In the case of Shipments, its current level now ranks in the 98th percentile of all prior readings while Delivery Times are also elevated in the 96th percentile of all other periods. 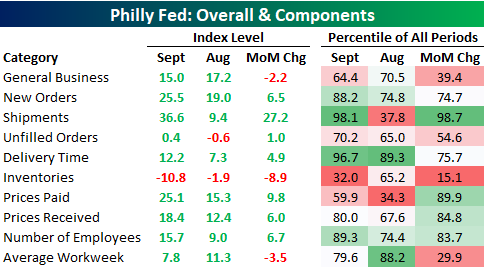 This month’s surge in shipments also ranks as the highest level in over 16 years (July 2004), and that comes just six months after the lowest reading on record.

Finally, in the report’s special questions this month, respondents were asked how Q3 production will compare to Q2, and the responses were positive.  22.2% of those surveyed expect production to increase by more than 10% while just 11.1% expect business to contract by more than 10%. While these results bode well for Q3, the outlook for Q4 doesn’t look as great.  Only 6.7% of respondents expect Q4 production to increase significantly while 11.1% expect activity to decline by a ‘significant’ margin.  In a trend that doesn’t bode well for the current high levels of unemployment, of those expecting activity to increase, only 17% plan to accomplish this by hiring additional staff.  The rest plan to either increase productivity, the hours of current staff, or other measures.  Click here to start a free trial to Bespoke to unlock full access to all of our research and interactive tools.