Following up on yesterday’s New York Fed reading on the manufacturing sector, this morning we got the manufacturing numbers from the neighboring Philadelphia Federal Reserve bank region. Similar to the Empire Fed’s reading for six months out, the Philly Fed’s index for General Business Conditions pulled back a bit in July falling to 24.1 from 27.5 in June.  In absolute terms, that was the least volatile one month swing in the index since November of last year.  Additionally, although it indicates a slower rate of improvement in July than June, it still indicates that the region’s manufacturing sector expanded for a second consecutive month after three months of contractionary activity.

Although the headline number fell in July, the internals paint a much more positive picture.  Almost every category is now showing an expansionary reading with the exception of Inventories and Delivery Times, though both of those in contraction is not necessarily negative. Granted negative readings of these two, as well as a sizeable drop in Shipments, did contribute to the weakness in the July headline number.

This month’s release indicated solid overall demand with New Orders surging to 23 from 16.7 last month.  Unfilled Orders also rose; moving back into expansion territory after four months of contraction. Meanwhile, Shipments were down 10 points to 15.3, but that is still a firmly expansionary reading. 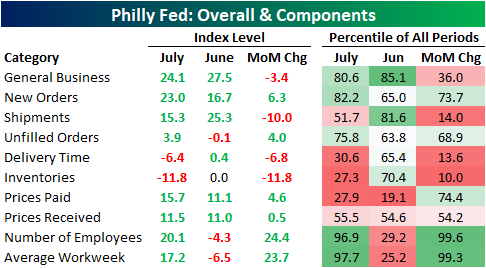 In addition to the strong levels of those indices, respondents reaffirmed the strength in demand by reporting higher prices for the second month in a row in terms of both prices received and paid. 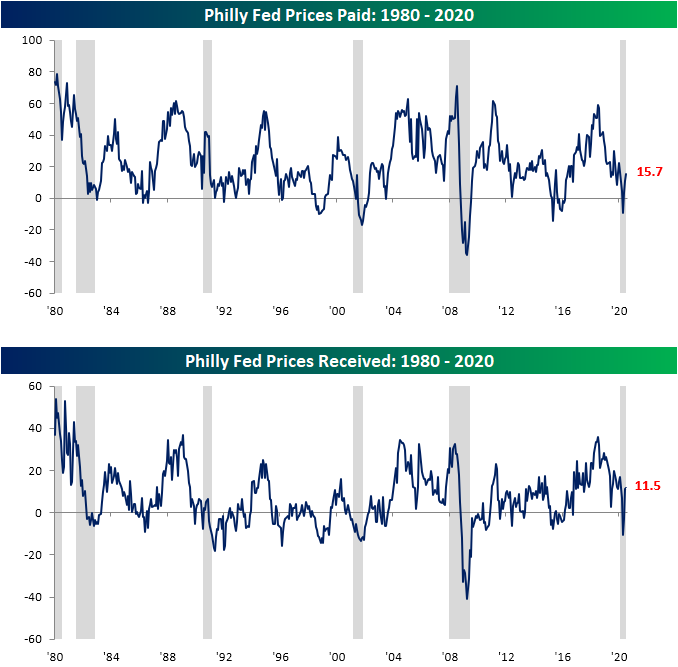 As previously mentioned, both Delivery Times and Inventories showed contractionary readings this month, but that again is not necessarily a bad thing. The Philly Fed’s index on delivery times has fluctuated between positive and negative readings in recent months while other Federal Reserve regions have seen their equivalent readings surge to extremely elevated readings (albeit lower more recently) pointing to supply chain disruptions and longer lead times. The tip into negative territory for the Philly Fed’s index of Delivery Times indicates shorter delivery times and potentially some further normalization in supply chains. Additionally, the index for Inventories fell to its lowest level since September of 2016. That indicates large inventory drawdowns which reasonably can be evaluated as a result of a pick up in demand given the increase in other areas of the survey.

As with yesterday’s Empire Fed report, one of the major highlights of this month’s Philly Fed report was the massive increase in readings on employment.  The index for Number of Employees and Average Workweek were the categories to see the biggest increases in this month’s survey returning to positive territory. For these two respective indices, this month’s gains were also some of the largest of all reports since the beginning of the survey. In fact, for both indices, there have only been two months with higher monthly increases. For both indices, one of those months was this past May’s report. As for the other month, the other larger monthly gain for the index for Number of Employees was May of 1975 and for Average Workweek it was June of 1970. These huge jumps also bring both indices into the upper 90th percentiles of all readings. In other words, Philly area manufacturers seem to have not only brought people back to work but also are returning to longer workweeks. Click here to view Bespoke’s premium membership options for our best research available. 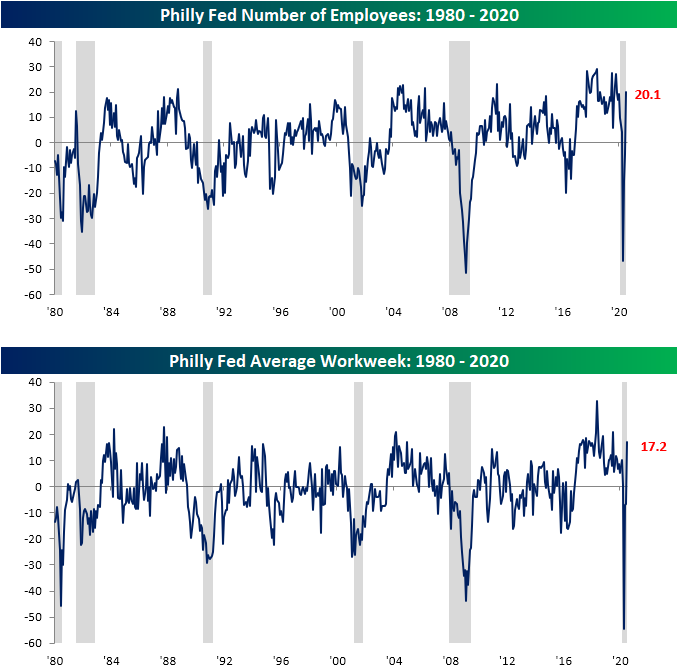