Last August 31st, well before the first studies on the effectiveness of COVID vaccines were published, Pfizer (PFE) was removed from the vaunted Dow Jones Industrial Average.  Due to its low share price and the fact that the Dow is a price-weighted index, the Dow’s decision-makers decided to remove Pfizer (PFE) instead of competitor Merck (MRK) and replace it with much higher-priced Amgen (AMGN).

Coincidentally (or not), Pfizer (PFE) has easily outpaced Dow members Merck (MRK) and Amgen (AMGN) since the changes were made to the index last August.  While Pfizer (PFE) is up 26% since it was removed from the Dow, both Amgen (AMGN) and Merck (MRK) have acted as drags on the index with declines of 10% and 7%, respectively.  There is a stark difference in the chart patterns of the three shown below.  (AMGN fell 6.5% today which is not yet included on the chart.)

Even after the big run it has had since the vaccine news came out late last year, Pfizer (PFE) is remarkably still trading below its all-time high made in April 1999.  There aren’t a lot of blue-chip stocks left that are still below their highs from the 1990s, but PFE is one of them.  After today’s move, PFE now needs to gain just 3.69% to break out to a new all-time high.  You can bet that “breakout” watchers will be salivating at this one given the multi-decade resistance level that’s in place. 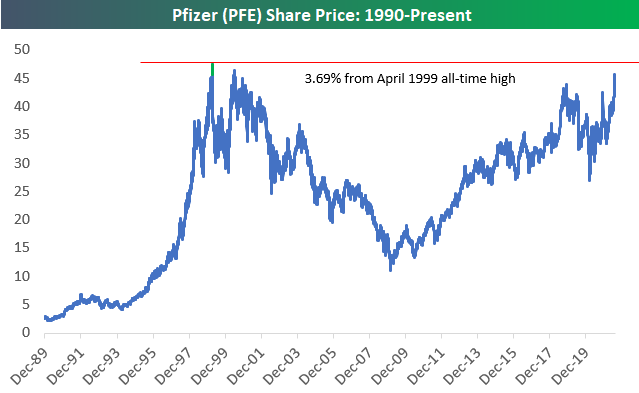 While PFE’s share price is still below its 1999 all-time high, long-term shareholders should at least be happy that the company pays a solid dividend.  In fact, even though PFE’s share price is down since its all-time high made in April 1999, the stock’s total return (with dividends reinvested) over this time frame is +103%, which translates into an annualized return of ~3.2%.  The impact that dividends have on total returns for investors cannot be overstated, and PFE is a perfect example. 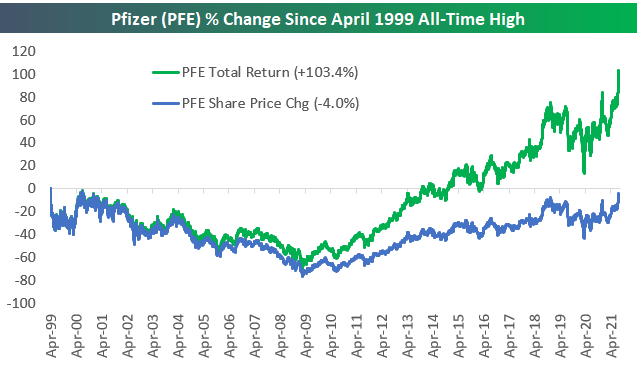 The difference in share price change and total returns is even more dramatic the further back you go.  Since 1990, Pfizer’s price change has been solid at 1,523%, but its total return is 2.7x that at +4,075%.  On an annualized basis, dividends reinvested add more than three percentage points to PFE’s move since 1990 (total return=12.5% vs. price change=9.2%). Click here to view Bespoke’s premium membership options. 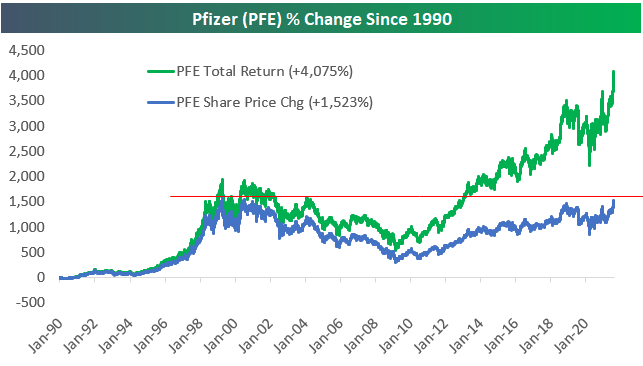