Roughly 1,300 companies have reported since the start of earnings season on 4/13 when the first of the big banks kicked things off.  For those stocks that have beaten EPS estimates, the reaction has not been as strong as past years with just a 9 bps difference between this earnings season and all seasons since 2001. On the other hand, those that have missed EPS have not been as badly punished dropping 0.86% compared to an average drop of 3.56% since 2001. For all stocks, the average gain of 0.79% this earnings season is much stronger than the 0.06% gain of all other seasons. 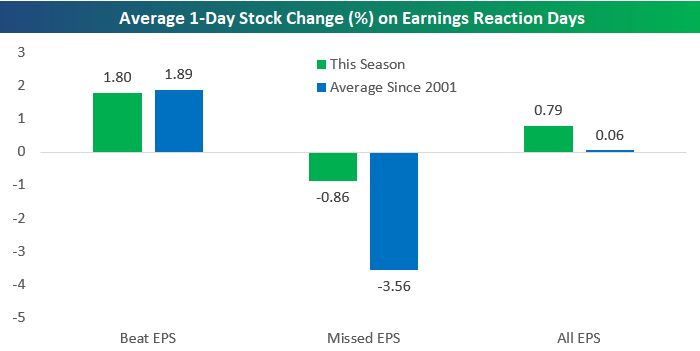 With stock price reactions being generally positive this season, most of the gain has come at the open. Stocks reporting earnings have gapped up an average of 1.24%. But intraday they have tended to sell-off, averaging a 0.44% decline from open to close.   Start a two-week free trial to Bespoke Institutional to access our interactive Earnings Explorer and much more.