Are you ready for the Olympics?  The 2022 Winter Olympics will kick off this Friday, and with that, we wanted to provide an update on how equities typically perform during the winter games.  In the table below, we list the start and end dates of every Winter Olympics since 1972 and show the performance of the S&P 500 and the host country’s benchmark stock index during each one.  For the S&P 500, performance has tended to be positive with an average gain of 1.0% (median: 0.9%) and positive returns just under 70% of the time.  Compared to all two-week periods over that same period (average: +0.4%, median: +0.6%), these returns are better than average.

For the host country, stock market performance has also been strong.  Since 1972, the host country of the Winter Olympics has had an average gain of 1.3% (median: 1.6%) with positive returns 80% of the time.  The most notable outperformance came in 1992 when French equities rallied 5.4% during the Albertville games while the S&P 500 gained just 0.1%. On the other hand, the S&P 500 considerably outperformed South Korean equities in the 2018 Games in PyeongChang, resulting in a performance spread of 4.6%. In fact, in each of the three most recent Winter Olympic Games, US stocks outperformed stocks in the host country by an average of 2.5%.  Countries often bid to host the Olympics in order to shed a positive light on their country, but it hasn’t always helped their stock markets outperform in the short run. To track the performance of China during the Olympic Games this year (starts on 2/4 and ends on 2/20), subscribe to Bespoke Premium today to gain access to our trend analyzer & chart scanner. 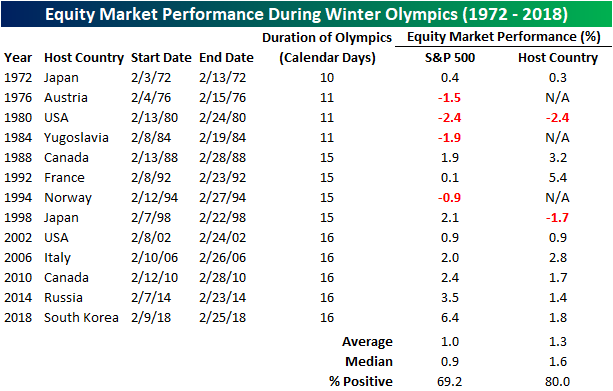