One of the hottest areas of the market heading into this week was the Transports as the Dow Transportation Index was riding a streak of ten straight positive weeks- its longest weekly winning streak since 1989.  The index is down so far this week, so unless it can turn things around, the weekly streak will end just one shy of the 11-week record in 1989. This week’s decline aside, if you are a follower of Dow Theory, the strength in the Transports is positive. 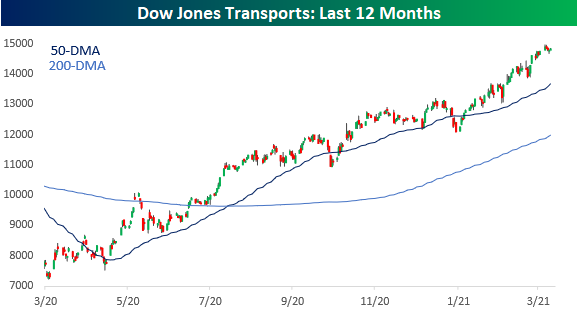 The snapshot below is a custom portfolio of the members of the Dow Transports from our Trend Analyzer and is sorted by YTD performance.  Topping the list are shares of Avis Budget (CAR) which has more than doubled YTD.  Like CAR, most of the index’s biggest winners have also been beneficiaries from the re-opening trade as American Airlines (AAL), JetBlue Airways (JBLU), Alaska Air (ALK), and Southwest Airlines (LUV) round out the top five.  While re-opening stocks focused on transporting people have seen the biggest gains YTD, companies focused on the transportation of goods have lagged.  At the bottom of the list, shares of CH Robinson (CHRW(, United Parcel Service (UPS), Union Pacific (UNP), and CSX are all up less than 10% YTD. 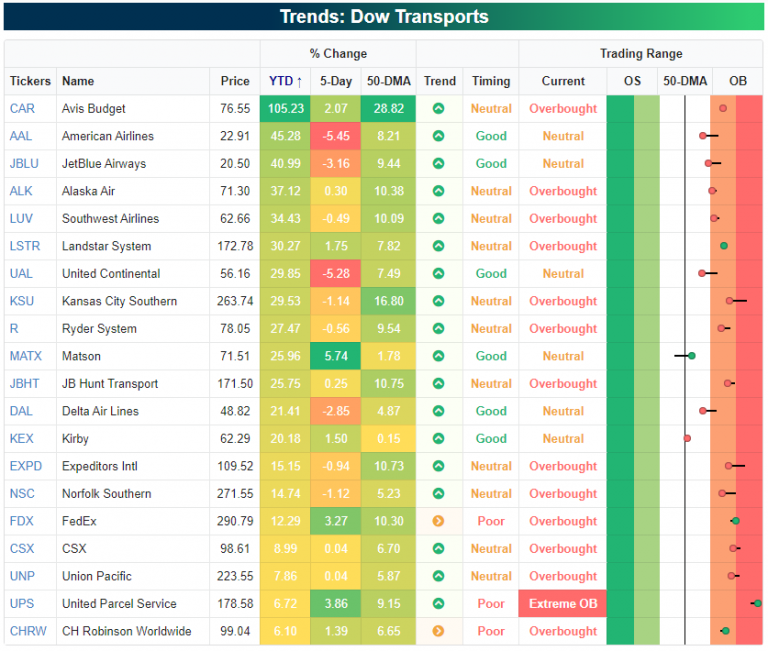 As mentioned above, the recent strength in the Transports has been led by ‘people’ rather than ‘parcel’ transporters, but it’s interesting to see how leadership has shifted over time.  We broke out the Dow Transports based on those that transport people (CAR, ALK, LUV, UAL, DAL, AAL, and JBLU) versus those that transport stuff (all the others) and then calculated the relative strength between the two baskets.  In the chart below, a rising line indicates outperformance on the part of ‘people-movers’ versus ‘parcel-movers’ and vice versa.  In the early days of the pandemic even before the lockdowns started and the WHO declared a pandemic, the ‘people-movers’ cratered on both an absolute and relative basis.  They continued to drop after, and it wasn’t until mid-May that they finally bottomed on a relative basis.  The period from late May through early June was strong for the ‘people-movers’, but as the summer wave accelerated, they quickly ran out of steam.  From there, there was little in the way of outperformance from either group.

In early November, the ‘people-movers’ got a boost from the Pfizer (PFE) announcement regarding preliminary results of its COVID vaccine, but throughout the winter there was still little leadership among either group.  It wasn’t until February of this year when vaccine rollouts picked up steam and fatigue from a winter of remaining stuck at home, that Americans finally really started to start going out again providing a huge boost for the ‘people-movers’.  More recently, even as Americans are more optimistic than ever about moving around heading into the Summer, the ‘people-mover’ stocks have stalled out relative to the ‘parcel movers’ which continue to rally. Whether this is just a period of consolidation following a big rally or something else remains to be seen, but it’s noteworthy that even as passenger air traffic continues to pick up and more airlines recall staff, the transports most leveraged to travel are at the same level they were at in late February. Click here to view Bespoke’s premium membership options for our best research available. 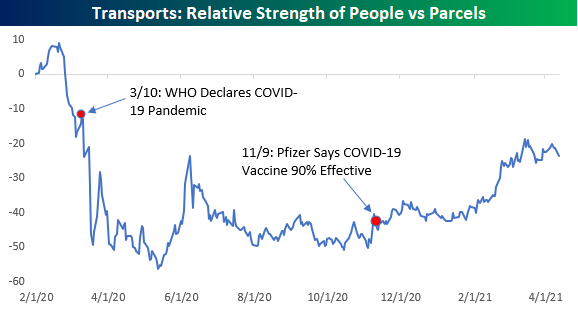