Thus far in 2021, most of the 30 largest S&P 500 stocks are in the green on a year-to-date basis with a few notable exceptions.  The largest company with a $2.1 trillion market cap, Apple (AAPL), has fallen 5.88% year-to-date and is down nearly 14% from its 52-week high.  Of the 30 largest stocks, the only two other stocks that are down by more year-to-date and are also further below their 52-week highs are Netflix (NFLX) and Tesla (TSLA). TSLA has been particularly hard hit with a 17% loss so far in 2021 which brings it down 35% from its high. Conversely, Alphabet (GOOG), JPMorgan Chase (JPM), NVIDIA (NVDA), Bank of America (BAC), and Oracle (ORCL) are some of the stocks that are closest to new highs (around 1% away) and are up around 30% or better YTD. Unsurprisingly for an Energy sector stock, the best performer this year has been Exxon Mobil (XOM) which is closing in on a 50% gain YTD.

After setting new record highs right around a month ago, the S&P 500 pulled back to its 50-DMA which it found support at on May 12th.  The subsequent rally since then has seen the index make a run back up to those record highs which it has been hovering around in recent days.  Since its May 12th low, by far the two best-performing stocks in the 30 largest stocks have been NVIDIA (NVDA) which has gained 27.71%, and salesforce.com (CRM) which has risen a smaller, but still impressive, 12.85%; both companies reported triple plays in late May which partially played a role in that strength.  While far from a leader, AAPL is also up in that time as is the rest of the trillion-dollar market cap club. 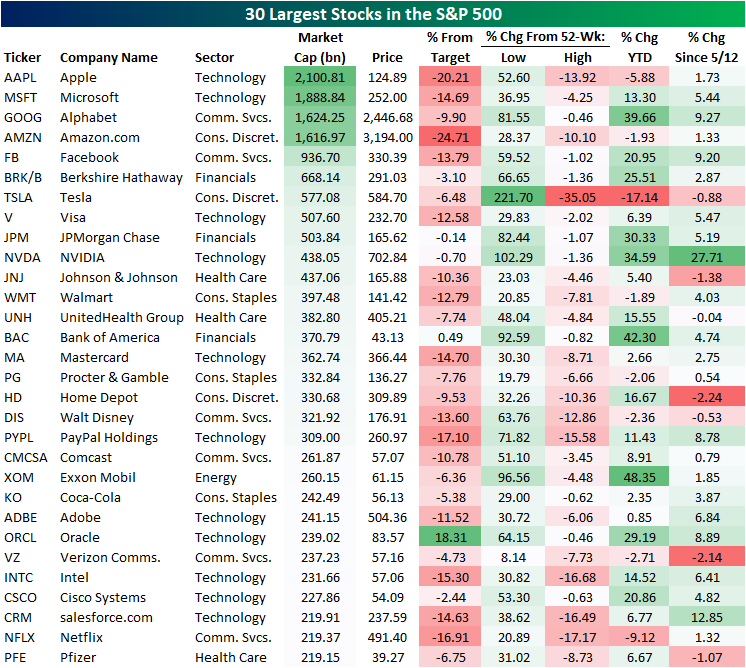 Another interesting thing to note of the stocks in the table above is their distances from their analyst price targets.  There are a handful like JPMorgan Chase (JPM), NVIDIA (NVDA), and Bank of America (BAC) that are currently within 1% of their consensus price targets.  After their strong runs this year, though, the median distance from a target for the full list is approximately 10% below.  BAC is actually slightly above its target, and not many others can say that.  In fact, the only other name of the largest stocks currently trading above its analyst price target is Oracle (ORCL), and it’s doing so in a big way.  As shown above, ORCL is currently over 18% above its target. Going back through the history of the data for the stock, no other period since 2003 has seen ORCL trade as elevated above its target as it does now.  For ORCL to get back below its average price target, either its share price would need to fall or analysts would need to significantly increase their price targets.

While it does not stand out from the list of the other largest stocks as it only trades 6.5% below its target, TSLA is also notable.  Over the past two years, the stock has continuously left its targets in the dust on average sitting 26% above. In July of last year, TSLA’s price even doubled the target price.  But with the stock’s weakness this year, its distance from its price target is much closer in line with the historical average.  Click here to view Bespoke’s premium membership options. 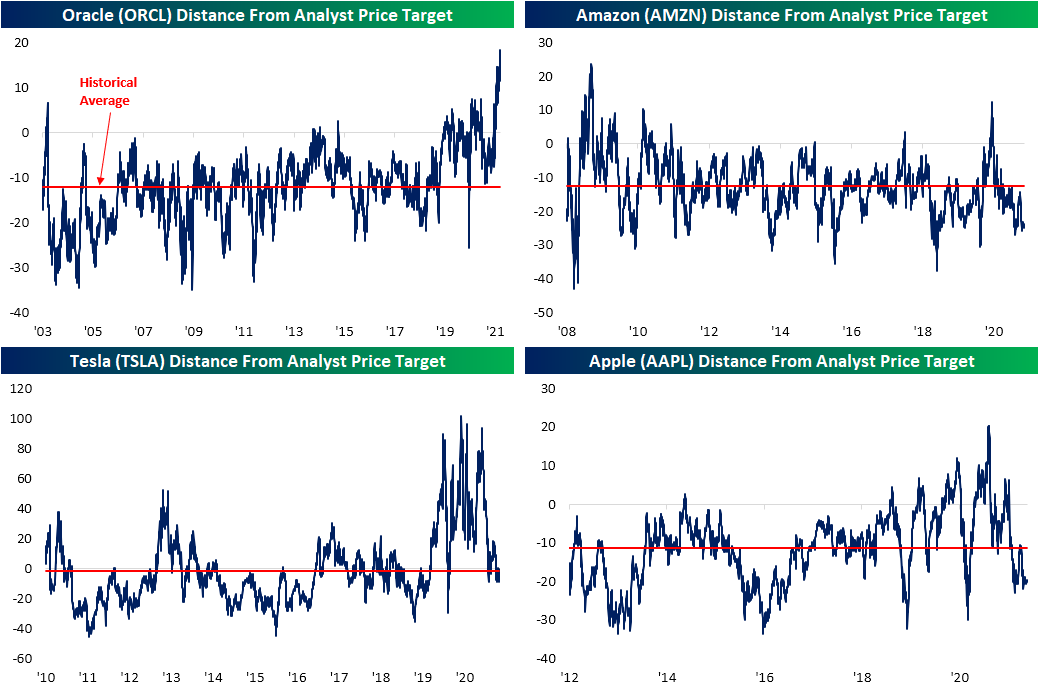