More fresh all-time highs, a winning streak ending at five days long, and the announcement of a trade agreement between the US and China in the past week have all contributed to sending bullish sentiment in AAII‘s weekly survey to 44.1%.  That is its highest level since October of 2018 and the first time in over four weeks that bullish sentiment is above its historical average of 38.08%. This week also marked back-to-back weeks in which optimism was the predominant sentiment. 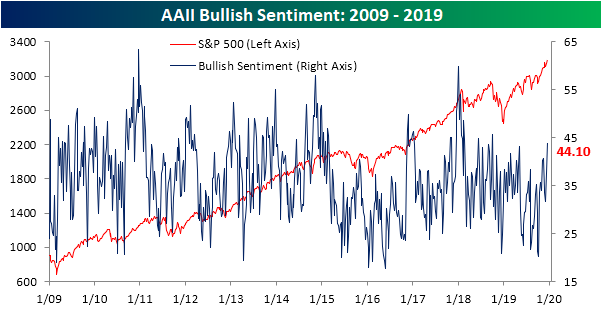 The gains in bullish sentiment have come from the bearish camp as those reporting as pessimistic fell to 20.5%, the lowest reading since the February low of 20%.  At this low of a level, bearish sentiment has gotten a bit extreme at more than one standard deviation below its historical average. Meanwhile, neither bullish or neutral sentiment are at similar extremes. In other words, while sentiment may be a bit overly optimistic, it could be worse. 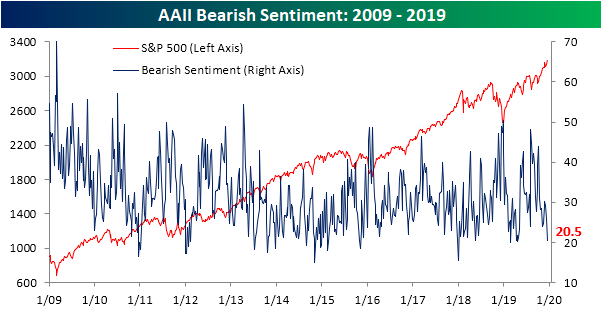 Not all of the gains in bullish sentiment came from bears.  The percentage of investors reporting as neutral fell by 0.92 percentage points to 35.4%.  Since that change was on the smaller side, neutral sentiment remains well within its recent range.  In fact, this week marked the nineteenth consecutive week that neutral sentiment was above its historical average. Start a two-week free trial to Bespoke Institutional to access our interactive economic indicators monitor and much more. 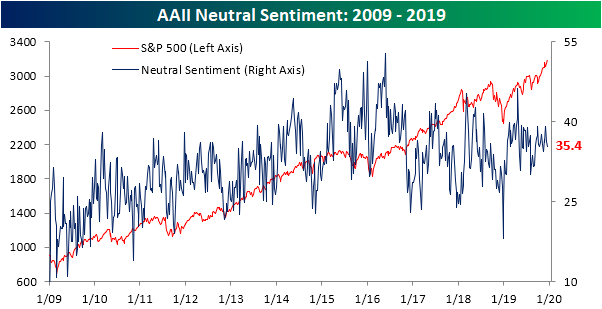