Optimism Nowhere to Be Found

Although the S&P 500 hit 52-week lows for the first time since June this week, bulls actually stepped back up to the plate (in a very small way).  Bullish sentiment, according to the AAII sentiment survey, rose back up to 20% after a low of 17.7% last week.  Even with that modest increase, bullish sentiment remains historically muted at 17.7 percentage points below the historical norm. 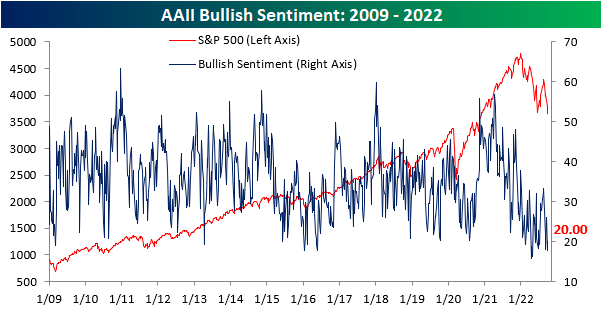 Bearish sentiment likewise remains elevated and hardly improved.  The latest reading dropped marginally from 60.9% to 60.8% marking the first time on record that there have been back-to-back readings of 60% or more as we noted in an earlier tweet. The only other times bearish sentiment came in above 60% were in March 2009, October 2008, and August and October 1990. 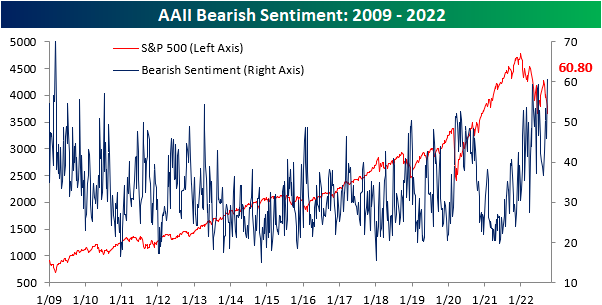 Given the near record high in bearish sentiment coupled with the slight increase in bullish sentiment, the bull-bear spread improved rising from -43.2 to -40.8.  Again, in spite of that improvement, the latest reading shows that bears continue to heavily outweigh bulls to a historic degree. 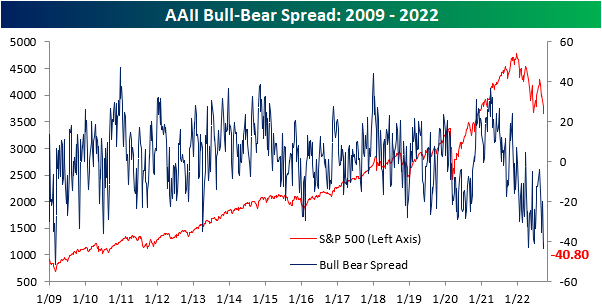 Given both bulls and bears are at extremes, recent moves have borrowed heavily from neutral sentiment.  That reading has fallen sharply over the past three weeks and is back below 20% for the lowest reading since April 2020.  The 9.5 percentage point decline over the past three weeks has been the largest drop in such a span since May pointing to investors being increasingly polarized. 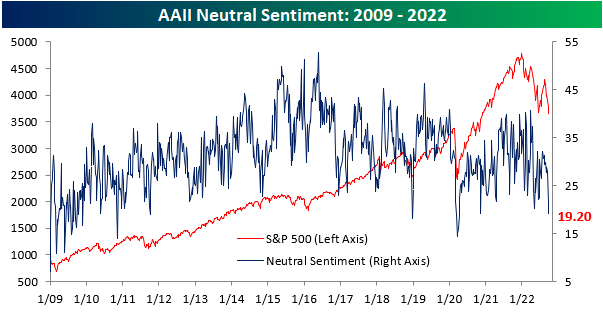 The AAII survey may have moved slightly less bearish this week on net, but other sentiment surveys saw the opposite results.  The Investors Intelligence survey saw bulls hit the lowest level since 2016, and the NAAIM exposure index showed the least long exposure to equities since March 2020. Standardizing and then combining each of these surveys shows that the average reading is now two full standard deviations below the historical norm.  That is slightly better than the June low with the only other period with as depressed a level of sentiment being the financial crisis years. Click here to learn more about Bespoke’s premium stock market research service. 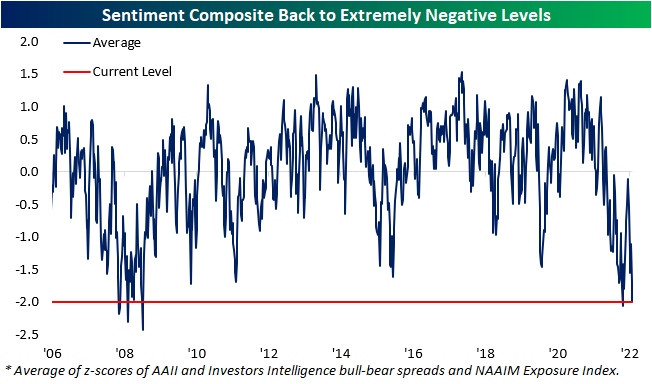