Optimism From the Little Guys

Early this morning the NFIB released the results of small business optimism for the month of August.  The headline index rose 1.4 points to 100.2.  That was better than expectations of 99.0 which would have been only slightly higher than July’s reading of 98.8.  That indicates overall improved sentiment for small businesses in August though it remains far lower than levels from prior to the pandemic. 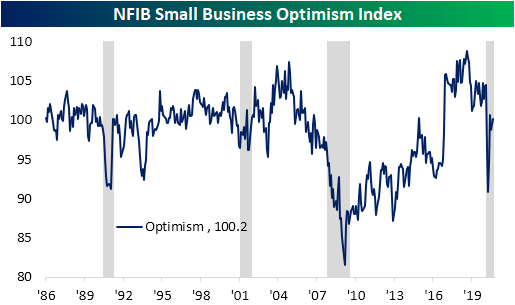 Of the ten individual components of the optimism index, most rose in August.  Only two, Expectations for the Economy to Improve and Expectations for Real Sales to be Higher, fell while Plans to Make Capital Outlays was unchanged. The index that saw the biggest jump was for Actual Earnings Changes which rose 7 points to -25.  That was the most that the index has risen in a single month since November of last year, but it still leaves it at the low end of the past decade’s range.

There is still a historically low level for expectations of future sales to be higher. That index was one of the two to fall in August as it is at its lowest level since October of 2016. Despite what appears like weak demand expectations, the net percent of owners viewing current inventories as too low stands at 3% which is in the 99th percentile of all readings.  The current reading of 3 is the highest since February of 1997. As such, a higher share of businesses plan to increase inventories.

The indices covering employment were another strong point of this month’s survey.  On a net basis, 21% of owners plan to increase employment which is up from 18 last month and stands in the top 5% of all readings.  That index is currently right back to where it was before the pandemic began.  Similarly, businesses are increasingly reporting job openings are hard to fill.  That index rose another 3 points to 33 and is in the upper decile of historical readings.  While improved and strong versus history, that index is much more muted relative to pre-pandemic levels than the index for Plans to Increase Employment. 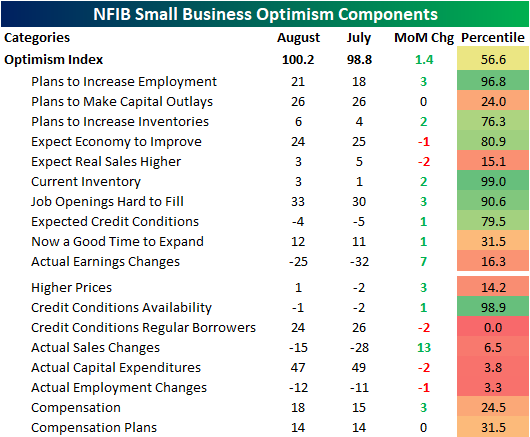 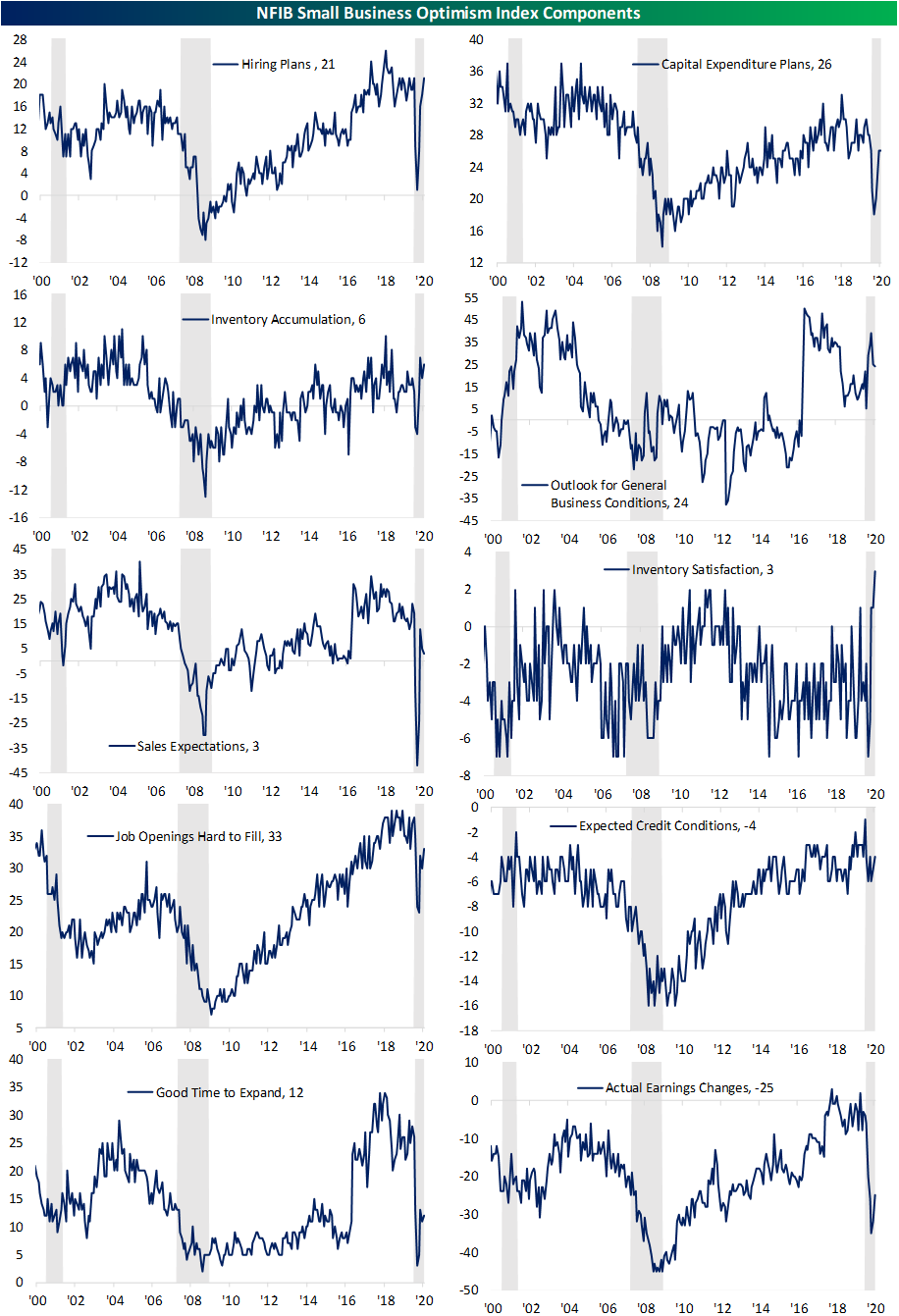 Although they are not necessarily inputs into the headline number for the optimism index, some of the indices for actual changes shed some additional light on the picture for small businesses.  For example, the index for Actual Sales Changes rose this month to -15 from -28 in July.  That is tied with December of 1986 for the third-largest one month increase on record and the first back to back months with sequentially higher readings since November. While this still means that more businesses are reporting lower than higher sales, it also indicates that sales are continuing to turn around a bit. Meanwhile, fewer and fewer businesses are making capital expenditures.  That index fell to 47 which means only 47% of businesses reported capital outlays in the last six months.  That’s the lowest level since December of 2010. On the other side of the production function, labor also fell in August.  The index for Actual Employment Changes fell 1 point to -12. Unlike for Capital Expenditures, though, that is not a fresh low. 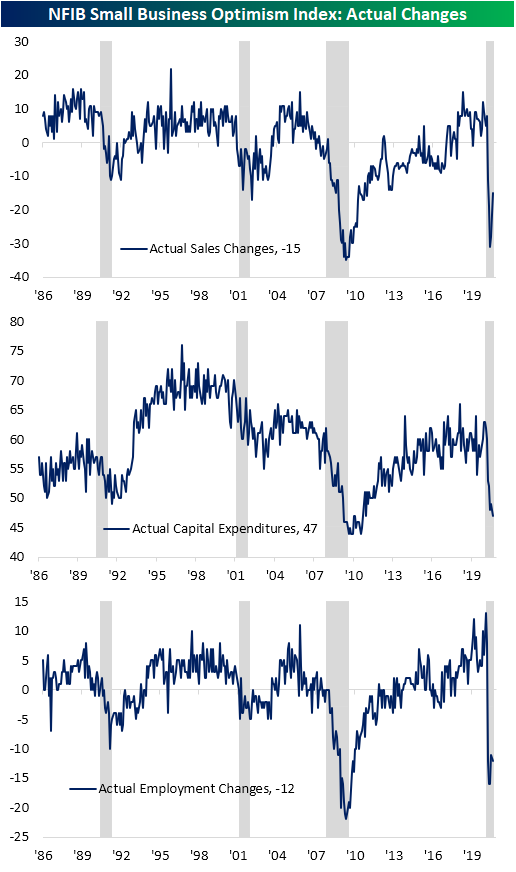 There is also an interesting divergence in readings on credit conditions.  As conditions remain accommodative, the index for Availability of Loans is at its joint highest reading on record (this index only goes back to 2004). Despite this, only 24% of owners reported borrowing on a regular basis.  That is a record low reading.Click here to view Bespoke’s premium membership options for our best research available. 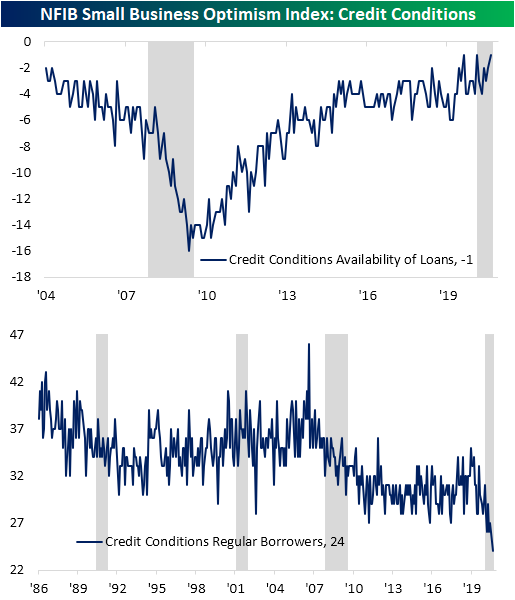