Opposite Day For Retail Triple Plays

There were two earnings Triple Plays in the past 24 hours, with both coming out of the retail industry.  A triple play is when a company reports better than expected earnings and revenues and also raises guidance.  On Tuesday after the close, Nordstrom (JWN) reported EPS 19 cents above estimates and revenues of $3.657 billion compared to estimates of $3.329 billion. In spite of those strong results, the stock is not only down but it has also erased all of the gains of the past week dropping 16.5% as of this writing in today’s session.  The leaves the stock right around its lows from the end of last month which are also at a similar level to the consolidation that took place at the end of last year.

Meanwhile, another retailer, Dick’s Sporting Goods (DKS), is seeing the opposite reaction. The stock is up 15% today after reporting EPS of $5.08 ($2.82 expected) and sales that were $440 million above forecasts. While both companies reported triple plays, those inverse reactions are also resemblant of the longer-term trends in the stocks heading into the reports.  Since the start of the year, JWN has been making a series of lower lows and lower highs while DKS has been in a steady uptrend. 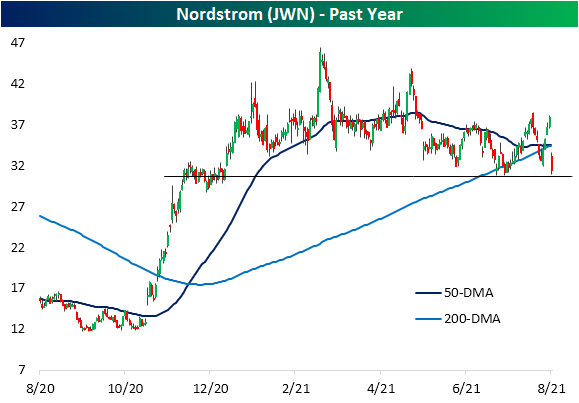 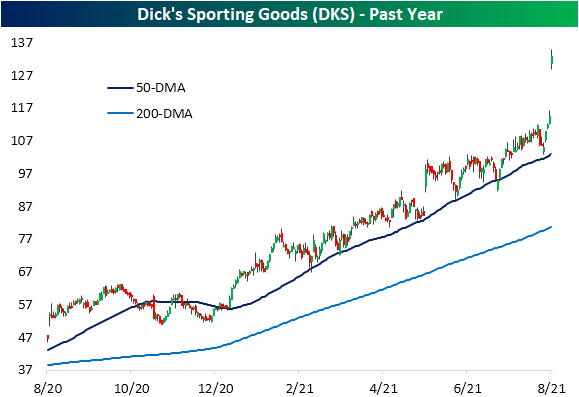 As for where the reactions stand relative to each stock’s respective history, JWN is on pace for its worst one-day reaction to any quarter since at least 2001 surpassing the 15% drop from its report in November 2015.

The stock price reaction for DKS is not at a record, but it is historic in its own right.  The move today is similar to that of last August when it surged 15.68% on earnings, although that quarter didn’t qualify as a triple play since the company didn’t raise guidance.  As such, the stock is on pace for its sixth (or fifth if it closes more than 15.68% higher) largest earnings move on record.

Adding to the irony of today’s reactions, historically Q2 has actually been the strongest quarter for stock price reactions to earnings for Nordstrom. On average, the stock has historically risen 2.26% the day after reporting Q2 results with a positive return 68.4% of the time. 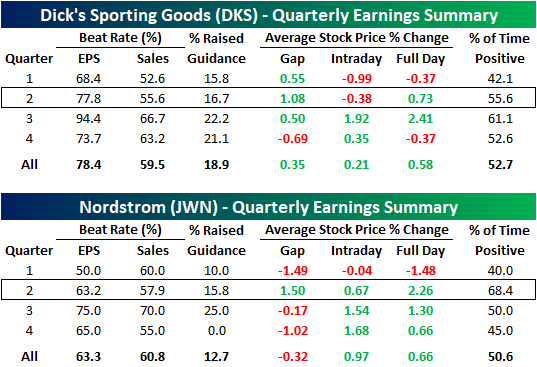 Turning to the retail sector more broadly, the SPDR S&P Retail ETF (XRT) is higher by 15 bps today as the ETF hovers at the high end of the past several month’s range.  Given it is an equal-weight ETF, the inverse and volatile moves in JWN and DKS are essentially canceling one another out. Click here to view Bespoke’s premium membership options. 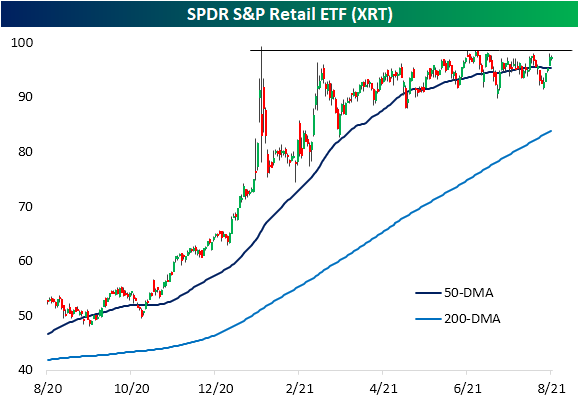