As noted in our Morning Lineup today, 2022 has been the year with no safety in US Treasuries.  The declines this year have been painful and persistent.   With the BofA 10+ Year US Treasury Index already down 7% this month, September will be the eighth month this year that long-term US Treasuries have had a negative total return, and there are still three months left in this miserable year!  Even if they don’t have another down month this year, 2022 will be tied (with several other years) for the largest number of down months in a calendar year going all the way back to at least 1978. 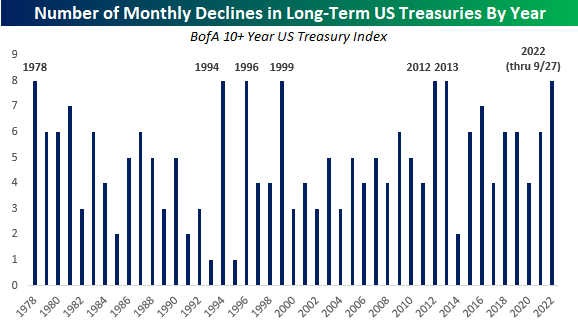 On a rolling 12-month basis, the current backdrop is even more extreme.  September will be the ninth month in the last twelve that long-term Treasuries were down, and that’s tied with October 1994 and August 2013 for the most in a twelve-month window.  Furthermore, if either of the next two months are down, the rolling twelve-month total will move up to a record of ten. Click here to learn more about Bespoke’s premium stock market research service.