One of The Strongest Weeks of the Year

While earnings are likely to be a key catalyst over the next few days, from a seasonal perspective, the current week of the year has historically been one of the best.  As shown in the snapshot from our Seasonality Tool below, the current week of the year (April 19th through April 26th) has seen the S&P 500 post a median gain of 1.44% over the last ten years.  Going out a bit further, the one-month return is only slightly better with a median gain of 1.47%, which is more middling relative to all other one-month periods throughout the year.  The same can be said for the 3-month period although it is a stronger period of the year which stands in the top quartile of all three month periods.

Expanding this beyond just the S&P 500, in the chart below we show the median performance across all sectors and market cap indices for the next week (4/19-4/26) based on the last ten years of trading.  As shown, Technology is right in line with the S&P 500 with a 1.44% gain while the small-cap Russell 2,000, the Energy sector, and Consumer Discretionary have notched slightly stronger performance. While mid-caps (S&P 400), Utilities, and Financials have all managed to also typically rise over 1%, there has historically been some weakness from Communication Services and the Dow Transports as both have median declines. Consumer Staples has only marginally moved higher with a 3 bps gain. 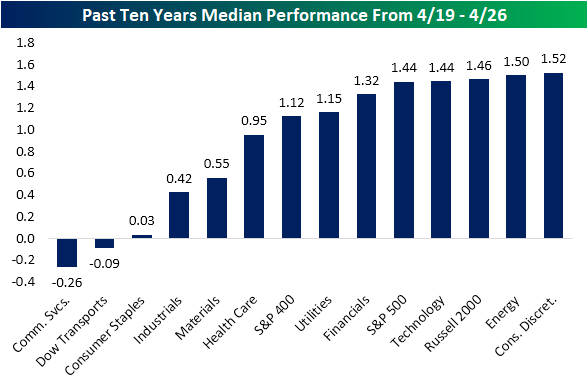 Taking a bit more of a granular look at this period, in the chart below we show the intra-month performance of the S&P 500 so far in April this year as well as a comparison to the historical average for the month of April since 1983.  With the S&P 500 already up around 5% on the month, performance thus far is better than the average gain of around 1.5% by this time. Even though the next week has historically been a very strong time of the year from a seasonal perspective, the S&P 500 is starting off trading lower today.  But we would note that it is not necessarily unusual.  As shown below, even though it has been a strong period, the first couple of days typically have seen the S&P 500 drift lower before reversing higher in a move that typically lasts through the end of the month.  Click here to view Bespoke’s premium membership options for our best research available. 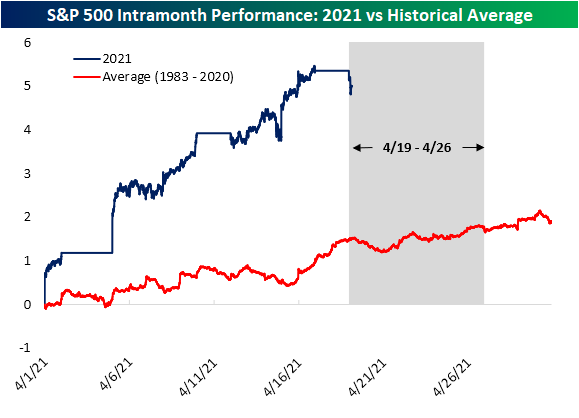