On the Other Hand

Harry Truman is famous (among other things) for saying, “Give me a one-handed Economist. All my economists say ‘on hand…’, then ‘but on the other…”  And it’s true.  You rarely will see an economic analysis that doesn’t couch one view with an alternative scenario, and you can’t fault them for hedging their bets.  Predicting the future is impossible, especially when it involves the direction of the world’s largest economy.

This morning’s employment report also has a number of hands.  At the surface, the report was better than expected coming in ahead of expectations (261K vs 193K).  As shown in the chart below, this was the seventh straight better-than-expected print and the ninth in the last ten months. 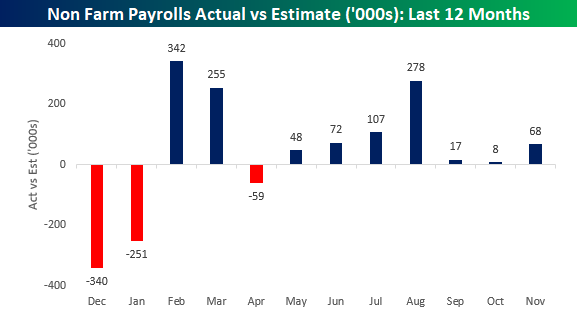 To illustrate just how impressive this recent run has been, the chart below shows streaks of better-than-expected prints in non-farm payrolls (NFP).  The current streak of seven is easily the longest such streak since at least 2000. 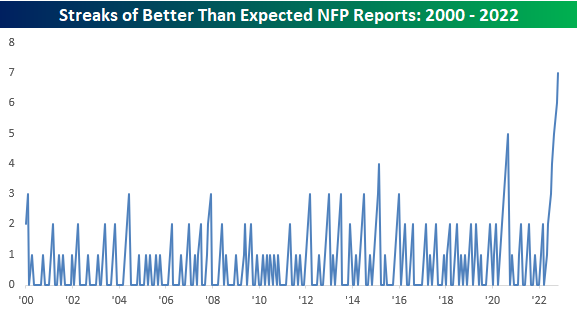 While job growth in the US economy has consistently surpassed expectations this year, it is important to point out that the pace of job growth isn’t accelerating.  This month’s print of 261K was actually the smallest monthly increase since late 2020 and is well off the peak readings seen in 2021 when the FOMC was maintaining its zero interest rate policy.  To put this trend in perspective, in 2021 the average monthly change in NFP was 562K.  In 2022, that average has declined to 407K, and in just the last three months, the average has been 289K.  On the one hand, the job market remains strong. On the other hand, momentum has clearly peaked and there has been a trend of deceleration. Click here to learn more about Bespoke’s premium stock market research service. 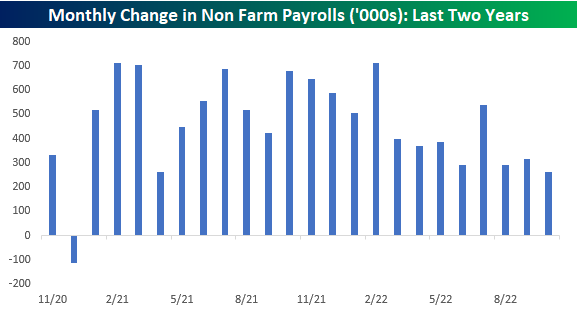