For the first time since September of 2014, the price of brent crude oil has topped $100. This occurred on the back of Russia’s invasion of Ukraine, which unleashed a slew of sanctions against Russia from the US & EU, sparking flash backs to the Cold War. Diplomatic relations between Russia and the West are deteriorating, and NATO Secretary General Jens Stoltenberg commented, “Peace in our continent has been shattered. We now have war in Europe, on a scale and of a type we thought belong to history.” 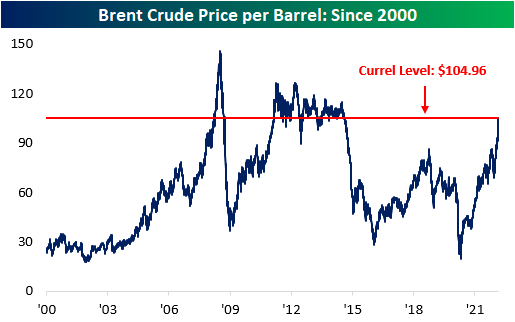 The last time that oil topped $100 per barrel for the first time in three months was in January of 2011. In just two months, the price of oil shot 17.6% higher, resulting in a y/y price increase of 41.4%. This occurred on the back of political turmoil in the Middle East, particularly in Egypt, Lebanon, Yemen and Bahrain. These conflicts caused speculation of continued unrest in the entire region, thus pulling into question the ability for the Middle East to adequately supply the world with oil. This occurred while demand for fossil fuels remained robust, hence the soaring price of oil. Oil did not definitively break back below $100 per barrel level until September of 2014, when OPEC increased output, oil production in the US began to boom and the Middle East’s geopolitical situation eased. The combination of these three factors sent the price of oil tumbling, falling by 51.8% in less than five months.

In 2008, the sky-rocketing in the price of oil was largely demand driven. In late February, oil topped $100 after considerable demand increases crossed with a stagnant supply. Oil moved continuously higher over the preceding 12 months, gaining 63.0% when all was said and done. However, the global financial crisis, also known as the great recession, caused a severe reduction in economic activity and demand, sending the price of oil tumbling by 58.2% in just one year following the initial topping of $100 per barrel.

Below is a set of graphs that shows the performance of the S&P 500 during these periods. As you can see, a rise in the price of oil does not necessarily imply a market pullback. In fact, a high price of oil insinuates that economic activity is strong and demand is robust. 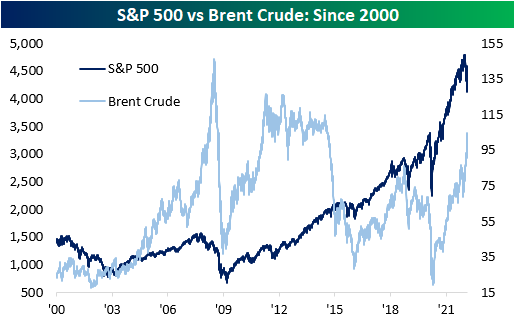 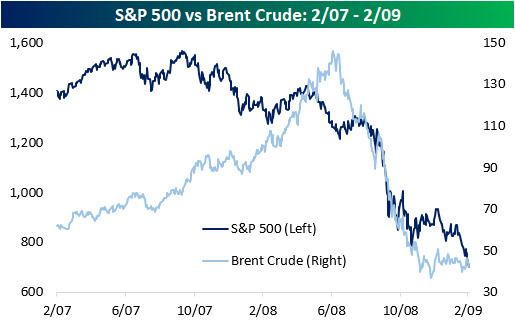 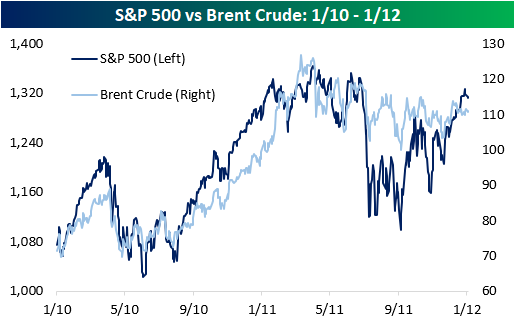 Whereas the correlation coefficient between brent crude and the S&P 500 is just 0.07 since the turn of the century, the correlation in the year before and after oil tops $100 for the first time was 0.40 between February of 2007 and 2009 and 0.84 between January of 2010 and 2012. These coefficients signify a moderate and strong positive relationship, respectively. When oil eventually definitively moved below $100 per barrel later in 2008, the S&P 500 crashed alongside oil prices, but the opposite was seen in 2011. Needless to say, the market is influenced by a multitude of factors, and oil is simply a single input.

Although we don’t have much data to go on, the forward performance of the market has been closely tied to the performance of brent crude after oil has topped $100 since 2000. In 2008, crude crashed just as quickly as it had risen, and the market followed suit. On the other hand, the price of crude remained elevated following the topping of $100 in 2011, and the market performed positively, but the forward year performance was lesser than the average since the turn of the century (3.1% vs 6.8%). In both occurrences, the price of brent crude climbed higher over the course of the next three months. In 2008, the price of brent crude rose by 29.8% in the next three months and 13.6% over the following six months. However, one year later, the price had crashed by 59.4%. In 2011, brent crude appreciated by 24.6% in the following three months, 15.6% in six months and 8.7% in a year. However, insinuating that the crash in 2008 had anything to do with oil would be a mistake. In fact, the inverse is likely true. Long story short, investors should not sell this dip due to the hike in oil prices alone, but there is much more to consider in the current macro environment. Click here to view Bespoke’s premium membership options. 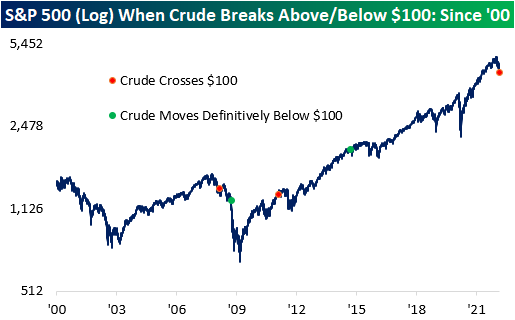