Like a flopping wet fish, it’s been incredibly hard to get a hold on an accurate price of crude oil this week.  With a gain of 22.2% so far today, WTI is experiencing its largest one-day gain on record (dating back to 1983).  The next closest largest one-day gain was in December 2008 when crude rallied 17.8%.  While today’s gain is impressive, keep in mind that it followed yesterday’s decline of 24.4% which ranks as the third-largest one-day decline on record and last week’s 24.6% decline on March 9th. In fact, three of the four largest one-day percentage moves in WTI have all come in the last two weeks!

While a big gain in any asset class always leads to questions over whether it is the start of a new run higher, we would caution that following the prior nine largest one-day gains on record, crude oil’s median change over the next week was a decline of 4.4%. Start a two-week free trial to Bespoke Institutional for full access to our market and economic analysis. 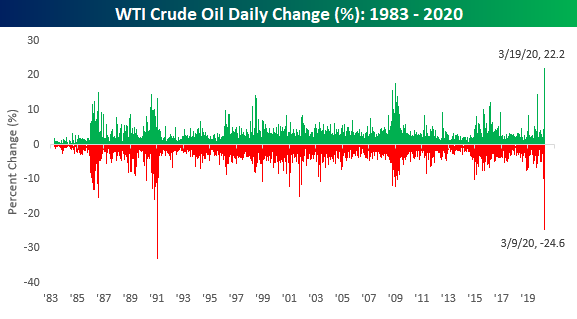