Given housing inventories remain historically low thanks to still strong demand, homebuilders have plenty to be optimistic about.  The National Association of Home Builders (NAHB) has continued to show this strength as its monthly sentiment survey set a record high for the month of October. Back in August, the index tied the previous record level of 78 from December of 1998. Over the past two months, it has only raised that bar, coming in at 85 this month; 2 points above forecasts and last month’s reading of 83.

The rise in the index comes on broad strength across each of the sub-indices.  Present Sales, Future Sales, and Traffic all matched or made record highs in October. The only sub-index that was not higher was for Traffic, though, it was unchanged at a record high. 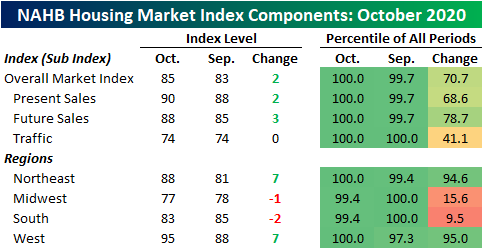 As for the look across each of the four US regions, the West and Northeast both saw sizeable upticks to new records, but sentiment in the Midwest and South were actually slightly lower. For the Northeast, this is the third record in a row. Meanwhile, the West’s record high in October finally surpassed the prior high of 91 from October of 2005.  Finally, even though sentiment fell in the Midwest and South, both remain at higher levels now than any month other than September’s record highs.  Click here to view Bespoke’s premium membership options for our best research available.