The Empire Fed Manufacturing survey was one of a number of disappointing economic data points released this morning.  The headline index did bounce off a near post-pandemic low last month, rising back up to -1.2, but that was below expectations for a move up to an expansionary reading of 2.5.  Six-month expectations, meanwhile, have continued to collapse with another post-pandemic low being set as it dropped to 14. 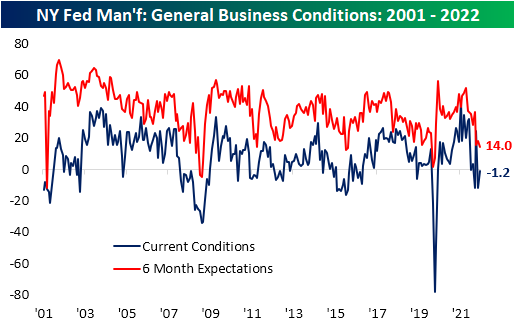 Although the reading on General Business Conditions disappointed, the rest of the report contained some silver linings.  Breadth was mixed with four different categories falling month over month while the remaining five improved.  In addition to the headline number, only the index for Unfilled Orders came in with a contractionary reading for current conditions.  Around half of the categories also continue to have readings in the top few percentiles of their historical range. 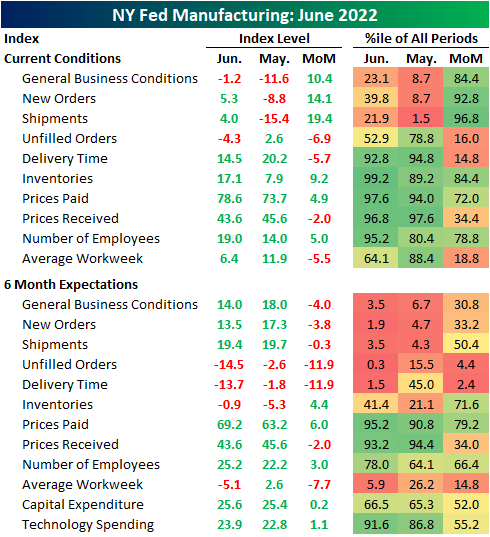 Two categories that were major components in the improvement of the headline number were new orders and shipments.  After deep contractionary readings last month, these two indices saw month-over-month increases ranking in the top decile of all monthly moves on record.  That lifted each of those back into expansionary territory meaning the region’s manufacturers are once again seeing growth in demand.  That being said, demand is not growing at the same historic rate as most of the past year, and as such, order backlogs are finally beginning to unwind as inventories are building at a historically strong clip.

In spite of the improvement in current conditions, reported expectations for future new orders is only slightly above levels observed at the depths of the pandemic.  Given that more pessimistic outlook for order growth, backlogs are anticipated to fall at a near-record rate. The only lower reading in the history of the data for Unfilled Order expectations was in September 2012. 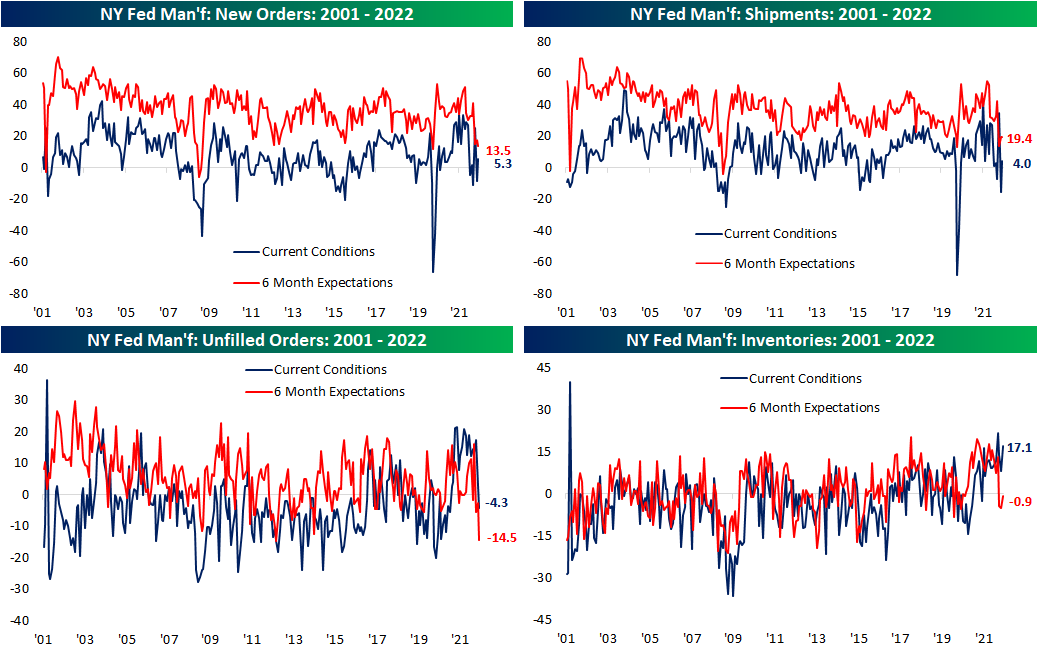 Another key explainer for those improvements in shipments, order backlogs, and inventories has been relieved supply chain stress. Echoing other supply chain-related data that we have touched upon (for a couple of examples see here and here), the index for Delivery Time has continued to plummet. In June, it hit the lowest level since last March. Although that remains a historically elevated reading well above most pre-pandemic levels, expectations have absolutely fallen off a cliff. That index has gone from one end of its historical range (a record high in March) down to the bottom percentile of readings and the lowest level since October 2013. 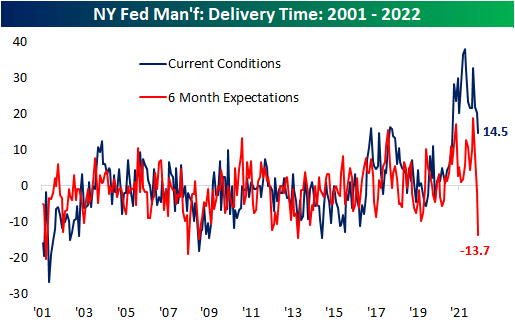 Those massive improvements in supply chain stress should also be positive on the inflationary front, granted, it has not exactly shown in the same way through the report’s prices indices. Both indices for Prices Paid and Received continue to sit at elevated levels in spite of somewhat promising moves in recent months.  Prices Paid have plateaued as Prices Received have begun to roll over. 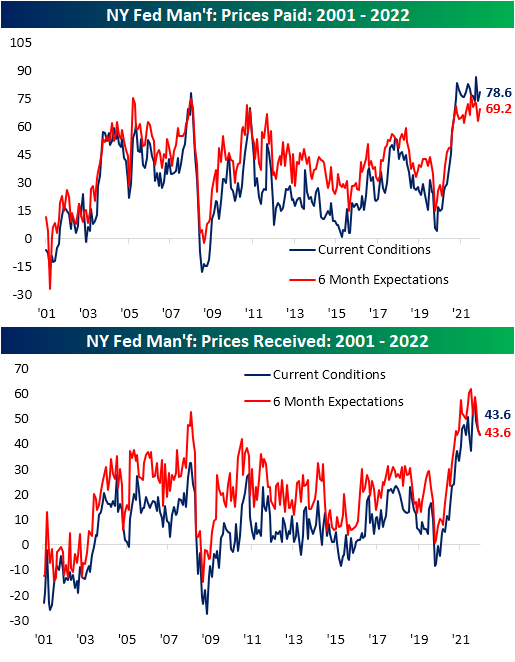 Pivoting over to employment-related categories, the region’s firms accelerated hiring in June even though the average workweek fell with expectations even weaker dropping into contractionary territory.  Meanwhile, the indices for Technology Spending and Capital Expenditure have been rolling over indicating manufacturers have been slowing down non-labor spending, but in June both indices saw modest bounces. Click here to learn more about Bespoke’s premium stock market research service. 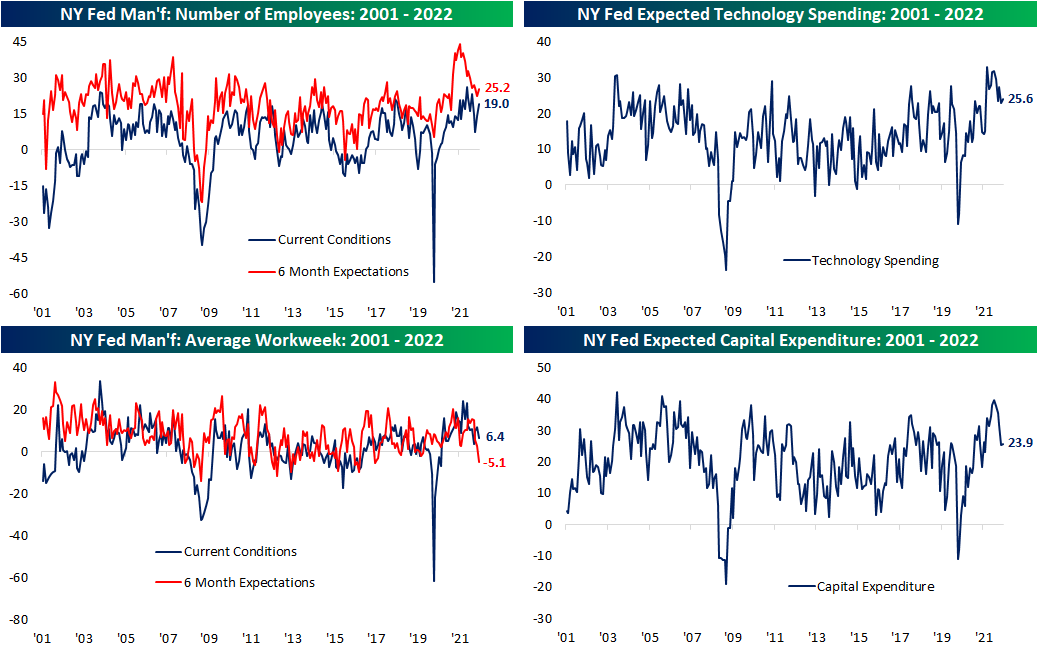