Seasonally adjusted jobless claims have been consistently declining since their peak on March 27th. In fact, up until this week, claims had fallen for a record 15 consecutive weeks. That more than doubled the previous record streaks that ended at seven weeks long in 2013 and 1980. 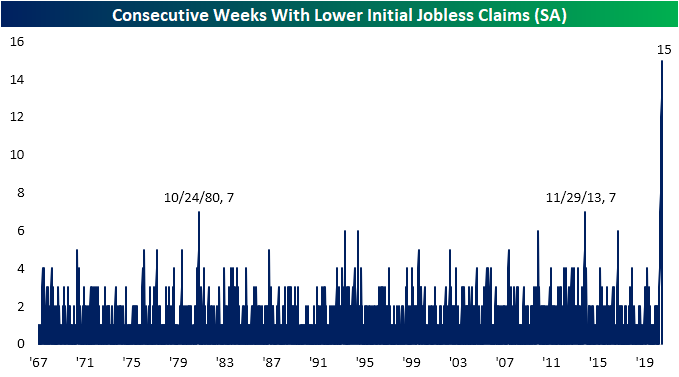 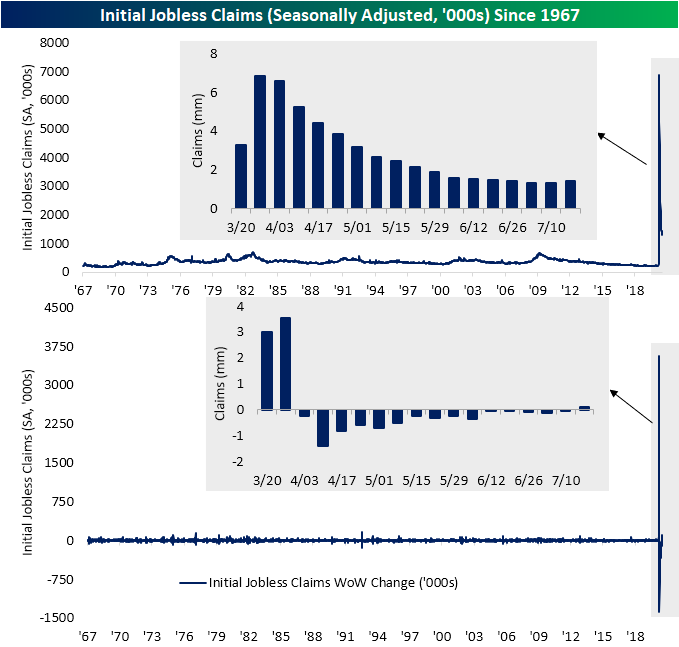 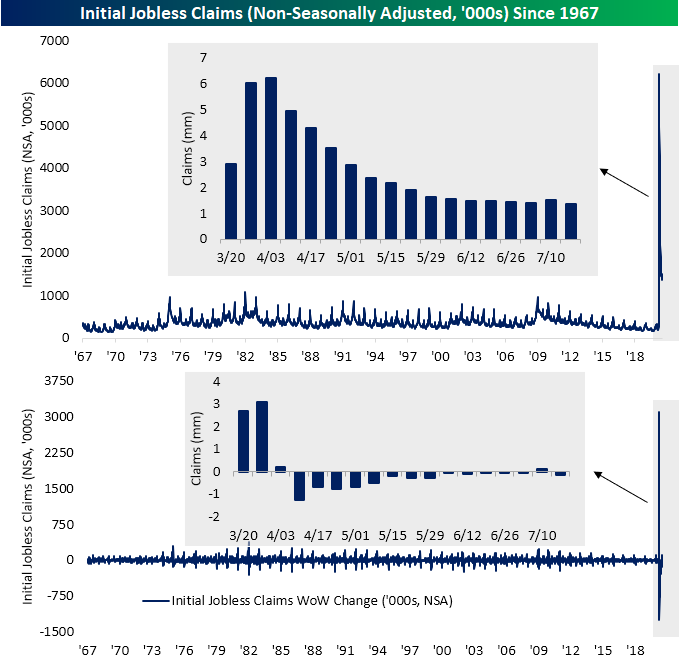 While that is an improvement, we would be hesitant to give this too much weight. While seasonal effects may be a bit diluted this year given other bigger factors, they are in play nonetheless and last week’s increase as well as this week’s decline are prime examples of this effect. In the chart below we show the average reading for claims for each week of the year from 1967 through last year.  As shown, last week (the 28th of the year) has typically marked a seasonal peak for jobless claims with the current week (red dot in the chart below) marking the initial decline off that seasonal peak which is similar to what has been observed in recent weeks. In other words, the past couple of week’s moves at least in part appear to be a result of seasonality. 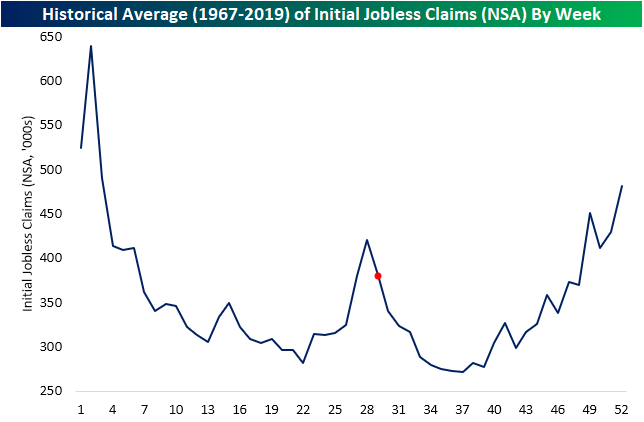 When including Pandemic Unemployment Assistance (which are non seasonally adjusted), it is more of the same with total claims lower than last week. That snapped a four-week streak of increases, but again,those past few weeks’ increases are consistent with the historical seasonal pattern for this time of year. 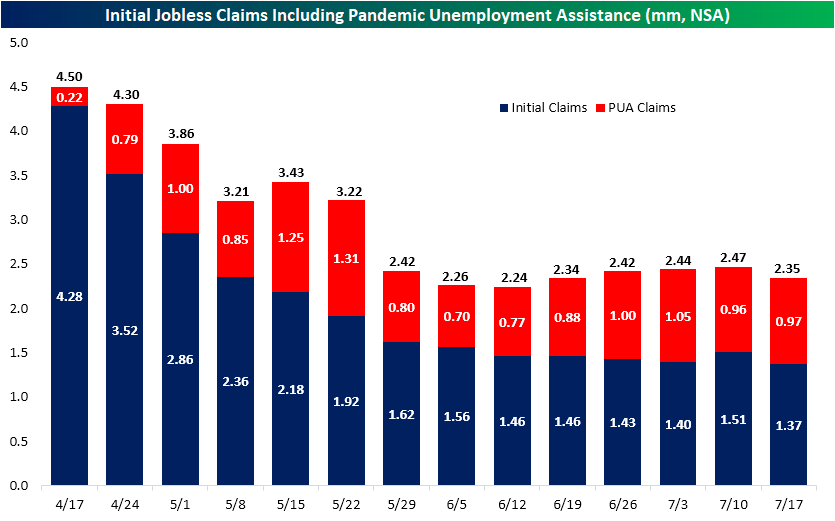 As for continuing claims, which are lagged an extra week, the declines continued with this week marking a seventh consecutive decline. Continuing claims dropped 1.107 million to 16.197 million. This week was the largest decline of those seven weeks with the only larger decline being a 4.071 million drop in mid-May.

Additionally, albeit lagged an additional week in the most recent data, continuing claims have also fallen when factoring in PUA claims. Total continuing claims (non-seasonally adjusted) for the week of July 3rd has dropped for two weeks in a row down to 30.5 million. Click here to view Bespoke’s premium membership options for our best research available. 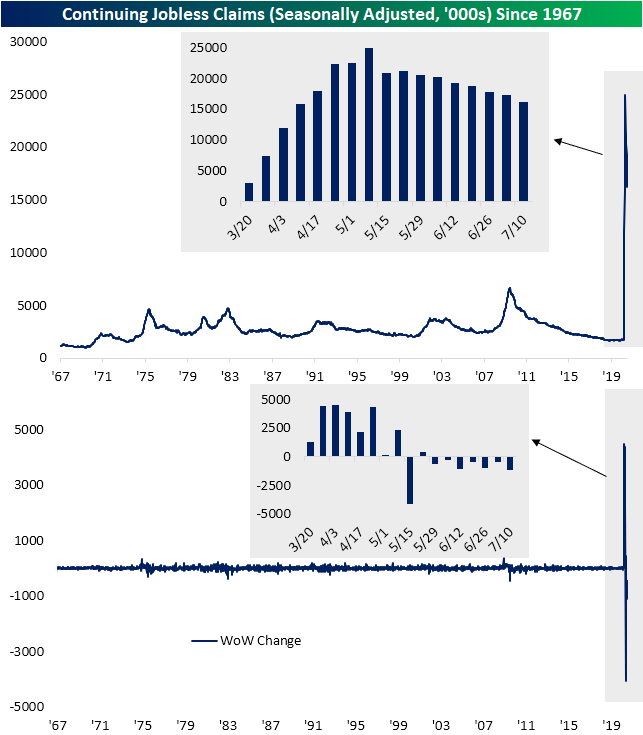 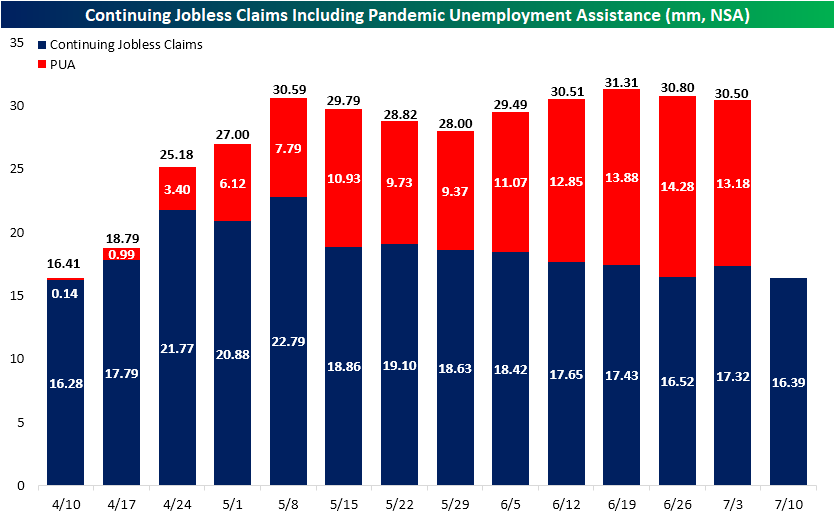