Of the major sectors, Energy (XLE) was up by far the most in November but you’ll notice that it’s still down 35% year-to-date.  The Financial sector (XLF) was up the second most in November with a gain of 16.85%, but like Energy, it too is still in the red on the year.  Utilities (XLU) had the worst month with a gain of just 0.74%.

Outside of the US, four countries gained more than 20% — Brazil (EWZ), France (EWQ), Italy (EWI), and Spain (EWP).  All four of these countries still finished November in the red for the year.  India (PIN) and China (ASHR) were up the least of the countries listed with gains of 8% and 6.95%, respectively.

Looking at commodity ETFs, oil (USO) had a banner month with a gain of 22.65% while natural gas (UNG), gold (GLD), and silver (SLV) were all solidly in the red.  For the year, though, USO remains down 69.8%.  Finally, the various fixed income ETFs in our matrix were all up slightly on the month.  The long-term Treasury ETF — TLT — remains up nearly 20% on the year, which easily beats the S&P 500 by more than five percentage points.  Click here to see Bespoke’s premium membership options and start a free trial for instant access to our research and interactive tools. 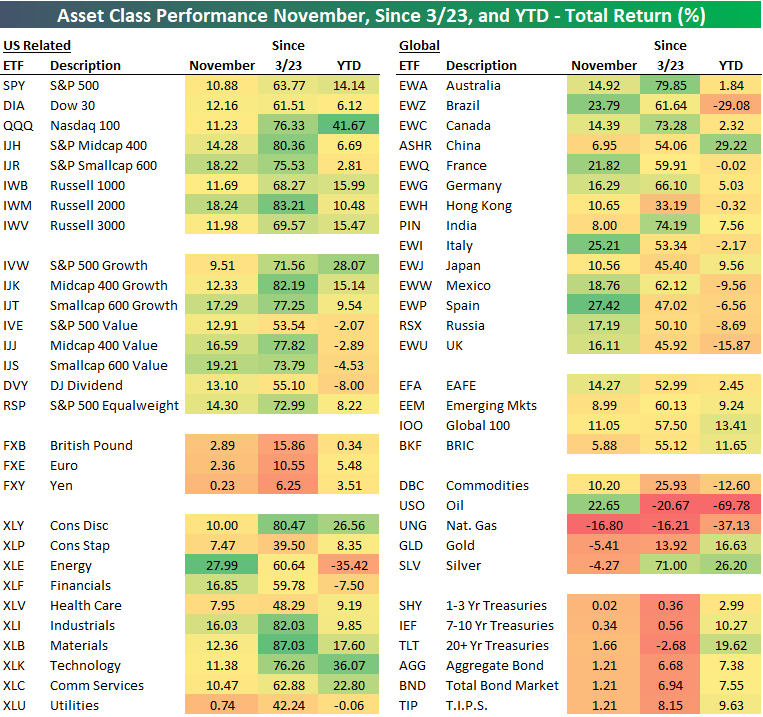