Not All Yield Curve Inversions Are Created Equally

While the Fed has pivoted from a period of quantitative easing to tightening, there has been near devastation in the bond markets as yields rocket higher. Interestingly, short-term rates have risen at a faster pace than long-term rates, which has caused fears of an inversion to resurface. Overnight, for the first time since February 2006, the 5 year yield was higher than the 30 year, which implies that investors have a higher required rate of return for near-term debt instruments (likely due to inflation and real yields). Inversions of yield curves are commonly cited as a leading recession indicator, so investors are carefully watching the movements in yield spreads.

As shown in the chart below, overnight Sunday into Monday morning, there was a brief inversion between the yields of the 5 and 30-year US Treasuries. By late in the afternoon Monday, though, the spread was back to a just barely positive and still narrow 1.3 basis points (bps). Since the start of 1980, the average spread has been 87.4 bps, and since 2000, the average has been even steeper at 126.5 bps. 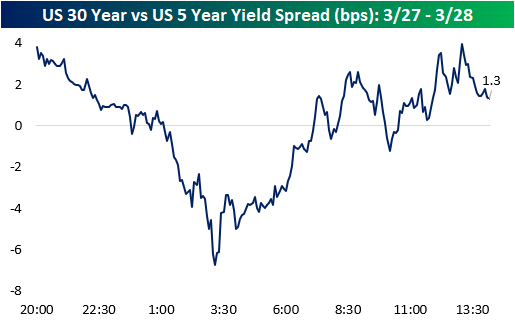 Below is a long-term chart of the yield spread between 30 year and 5 year US notes. As you can see, the narrowing of the spread has been constant since mid-2021, which is when CPI prints began to come in way ahead of estimates, implying that the Fed would have to take tightening action to slow down economic growth. The last time these yields came close to inverting was in mid-2018, but a pullback in rates caused the spread to widen before an inversion occurred. Looking back historically, while a recession has usually followed an inversion of the 5s30s yield curve going back to 1980, it has not been the most reliable predictor of recessions compared to other parts of the curve.  As shown in the chart, there were two different points in the 1980s where the curve inversion was a false alarm, and then again in the mid-1990s, this part of the curve briefly inverted but no recession was forthcoming. Click here to try out Bespoke’s premium research service. 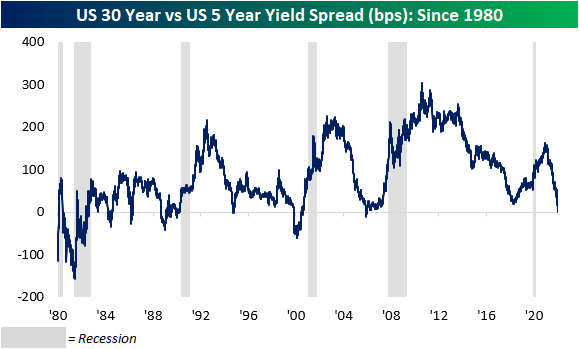