Not All Fixed Income is Broken

So far this year, returns in the US treasury market have gotten off to a bad start.  Based on the performance of the BofA indices, long-term US treasuries are already down over 5% YTD which would be only the second time in the last ten years that the asset class started off the year so poorly.  While treasuries have been weak, not all areas of the fixed income market have performed poorly. In fact, high yield debt, which tends to be more closely correlated to the equity market, is having a much better year, gaining a bit over 1%.

The chart below shows the YTD performance spread between high yield and long-term US Treasuries 28 trading days into each year since 1995.  With a current spread of over five percentage points, high yield is outperforming long-term Treasures by the widest margin since 2012 and the fifth widest margin since 1995.  The only other years besides 2012 where the spread was wider were 2011, 2009, and 2001. 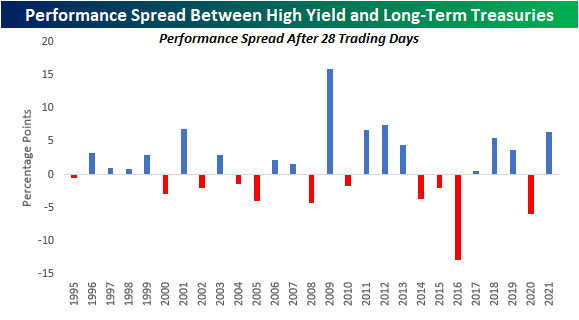 High yield has also achieved a pretty notable milestone this week as spreads relative to US Treasuries have narrowed to their lowest levels since the February 2020 pre-COVID peak in the S&P 500. On 2/19/20, when the S&P 500 peaked before the COVID crash, high yield spreads were at 357 basis points (bps).  After finishing off last week at 358 bps, spreads have narrowed this week to the current level of 351 bps.  It’s certainly been a wild year for the high yield market.  Less than a year after spreads topped 1,000 bps and were within the 97th percentile of all historical readings, today spreads are two-thirds lower and just below the 20th percentile relative to all other readings. So, spreads are very low, but they’re not necessarily at a historical extreme.  Click here to view Bespoke’s premium membership options for our best research available. 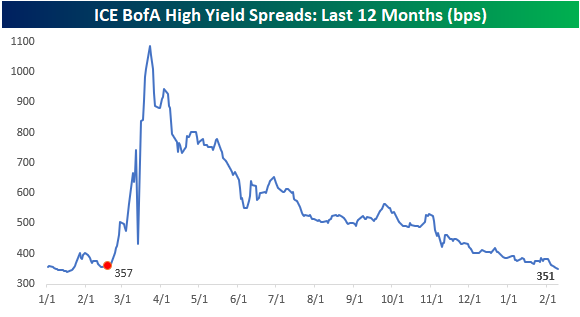