Not All Bad for the Empire Fed

The New York Fed kicked off the slate of December manufacturing data this morning with the release of the Empire State Manufacturing Survey. The release was expected to come in at the same level as last month (6.3), but instead, moved lower down to 4.9.  The index remained positive meaning the survey’s results were again consistent with growth, just at a slightly lower rate than expected. Even though current conditions have not been improving rapidly, respondents generally remain optimistic for the future.  The index for expectations six months out was slightly higher at 36.3. While higher, it is off the highs from just a few months ago still at more optimistic levels than were observed over the last couple of years.

Even though the headline index fell 1.4 points this month, breadth in the report was fairly strong. Most indices were higher relative to November with the only two indices declining being those of New Orders and Prices Received.  Meanwhile, only two indices—those for Unfilled Orders and Inventories—showed contractionary readings in December which is no different from last month.  Granted, both of these indices also showed less of a contractionary picture. Expectations readings for the same indices, on the other hand, were more mixed with around half lower month over month. 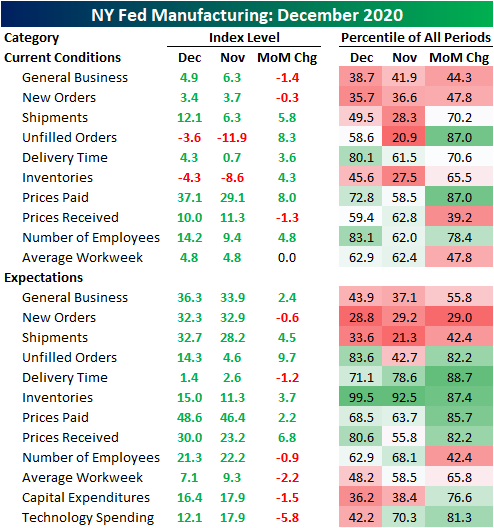 One of the two indices to decline in December was New Orders.  The decline was small though as the index dropped just 0.3 points to 3.4.  Outside of August’s contractionary reading, that is the lowest reading for New Orders in the past six months. Granted, the positive reading meant new orders have now risen for four straight months, albeit at a slower pace in November and December.

As New Orders continue to grow, Unfilled Orders are getting worked off.  The index for Unfilled Orders has remained in contraction for every month since April now. This month’s reading of -3.6 was the second-highest reading of that period behind July’s reading of -0.6.  The expectations index, though, remains much more optimistic.  25.7% of respondents reported that they expect unfilled orders to be higher in six months compared to 11.4% reporting they expect orders to be lower.  That resulted in the index rising to 14.3, the highest since February of 2018. The 9.7 point increase was also the largest one month move in expectations since November of last year. 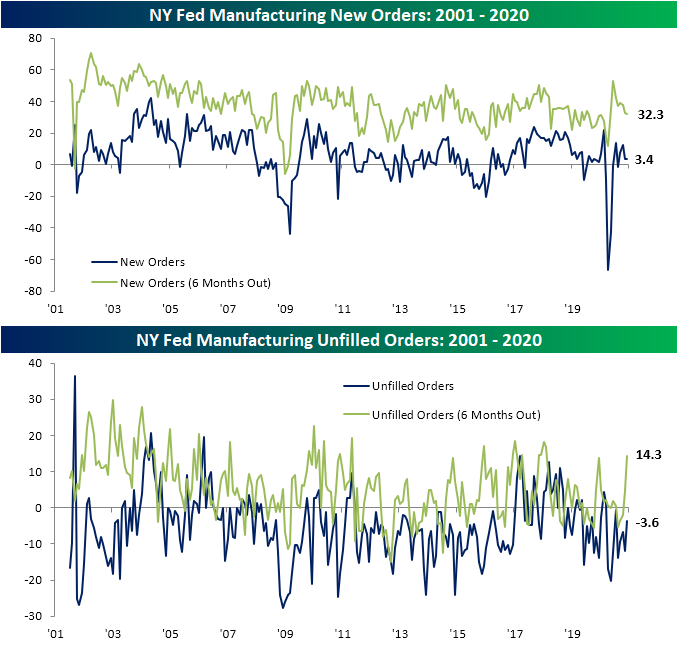 With businesses meeting demand, inventories have continued to decline.  The index for Inventories has now been in contraction for nine consecutive months. Granted, this month saw the index move higher from -8.6 to -4.3. That means inventories have continued to decline but at a slower pace in December.  Similar to unfilled orders, there is also quite a gap between current conditions and expectations.  The index for future expectations rose to a reading of 15 in December.  That is the second-highest reading on record behind January of 2018’s high of 20.3.  In other words, even though inventories have declined for nine straight months, firms are not anticipating that to continue.  Nearly 30% of responding firms reported that they expect inventories to rise in six months’ time.

While there were more improvements in demand and inventories were lower, prices for inputs have been on the rise.  The index for Prices Paid rose 8 points to 37.1 in December.  Expectations for Prices Paid likewise moved higher reaching the highest level in two years. Prices Received are not experiencing the same degree of upward pressure though.   The index for Prices Received fell in December from 11.3 to 10 which is a much more modest reading overall. That is not to say it will continue to be that way.  Expectations for Prices Received rose to a reading of 30, the highest level since February of 2018. 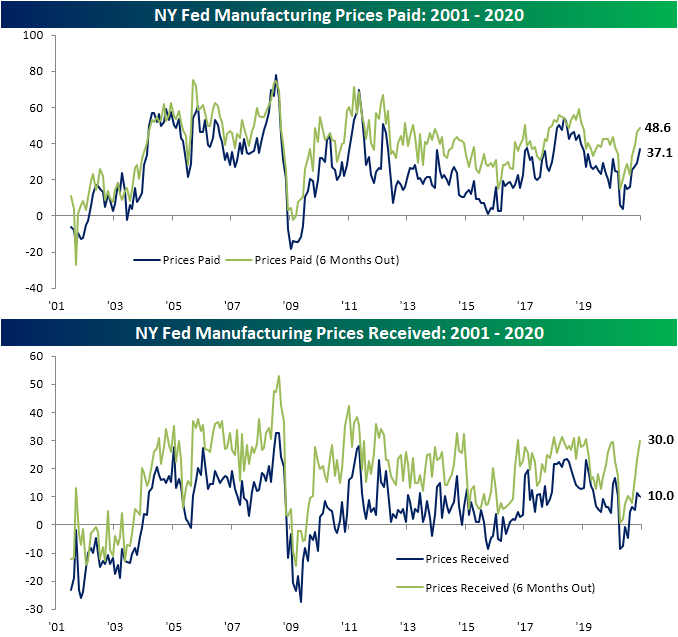 In spite of the rise in COVID cases, the report’s readings on employment were pretty strong.  The index for the Number of Employees rose to 14.2 which was a two-year high while the index for the Average Workweek was unchanged at 4.8. So New York area manufacturers are not only hiring at their fastest rate since the end of 2018, but they are also increasing working hours. Click here to view Bespoke’s premium membership options for our best research available.. 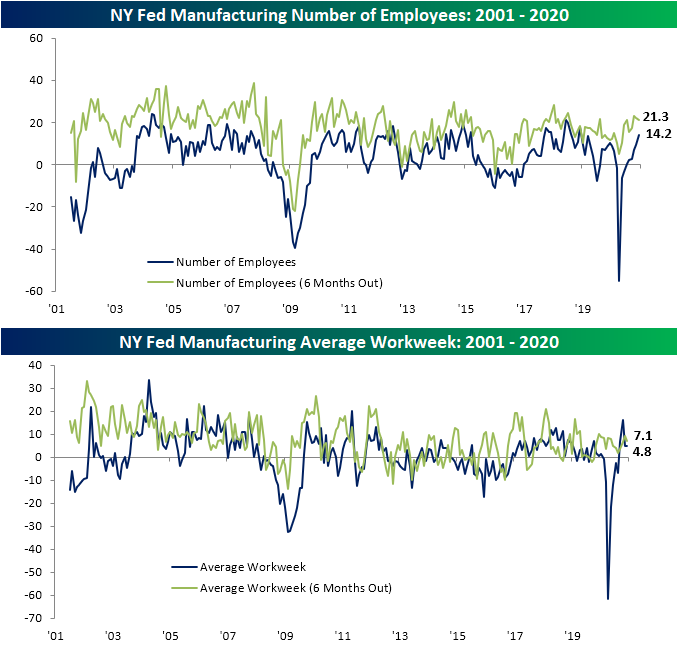