Not All Bad for Small Business

This morning the NFIB released their monthly reading on the small business sector. With case counts rising throughout November, small business optimism took a hit.  Compared to September and October’s identical readings of 104, November’s reading fell to 101.4.  Although that is lower, it remains above the levels seen from March through the summer. Additionally, there were several silver linings in this month’s report. 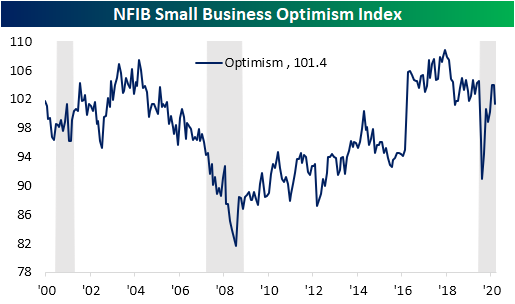 Glancing across the various components and sub-indices of the report, breadth was pretty mixed.  Of the ten components of the headline number, six fell and the remaining four were higher.  Of the other indices that are not inputs to the headline number, half of the indices were higher while another two were unchanged, and the other two were lower.

As for the most pressing problems reported by small businesses, there was little change overall.  Quality of labor remains the most widely reported problem, stealing share from those reporting the cost of labor as the biggest issue.  The second biggest issue and the only other one to see an uptick in November was taxes.  Perhaps due to the results of the election and the prospects of higher taxes down the road, the percentage of respondents reporting taxes as the most pressing issue rose 3 percentage points to 20%. 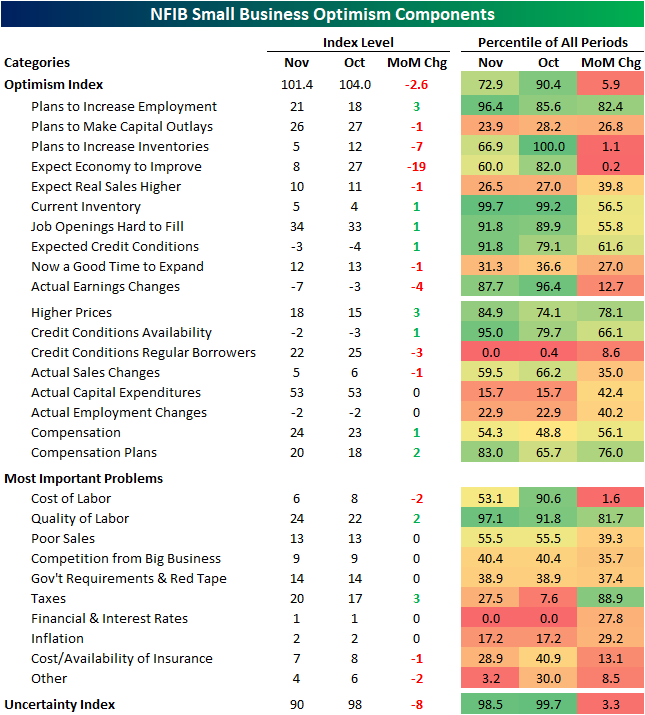 Taking a deeper dive into the individual components of the report, the various indices concerning employment metrics were pretty strong in November.  While the index for actual employment changes remains negative meaning more businesses reported declines in employment rather than increases, that is not to say businesses are not looking to gain employees.

For starters, a higher number of responding firms (34% vs 33% in October) reported that they had at least one unfilled job opening in November. That is in the top decile of all historical readings. Breaking that number down further, the NFIB highlighted that 29% of those were for skilled workers and 13% were for unskilled workers.  Additionally, businesses do plan to fill open positions in the near future. The index for plans to increase employment rose from 18 in October to 21 last month.  Overall, more than half of firms said that they either hired or are trying to hire as 30% reported that either cost or quality of labor have been the biggest roadblocks to their business. Given these apparently tight labor conditions, the indices for compensation and plans to increase compensation were both higher.

We would also note that the divergence between businesses wanting/trying to fill positions and declines in the actual number of employees reported is consistent with what we saw in last week’s data from the ISM report. 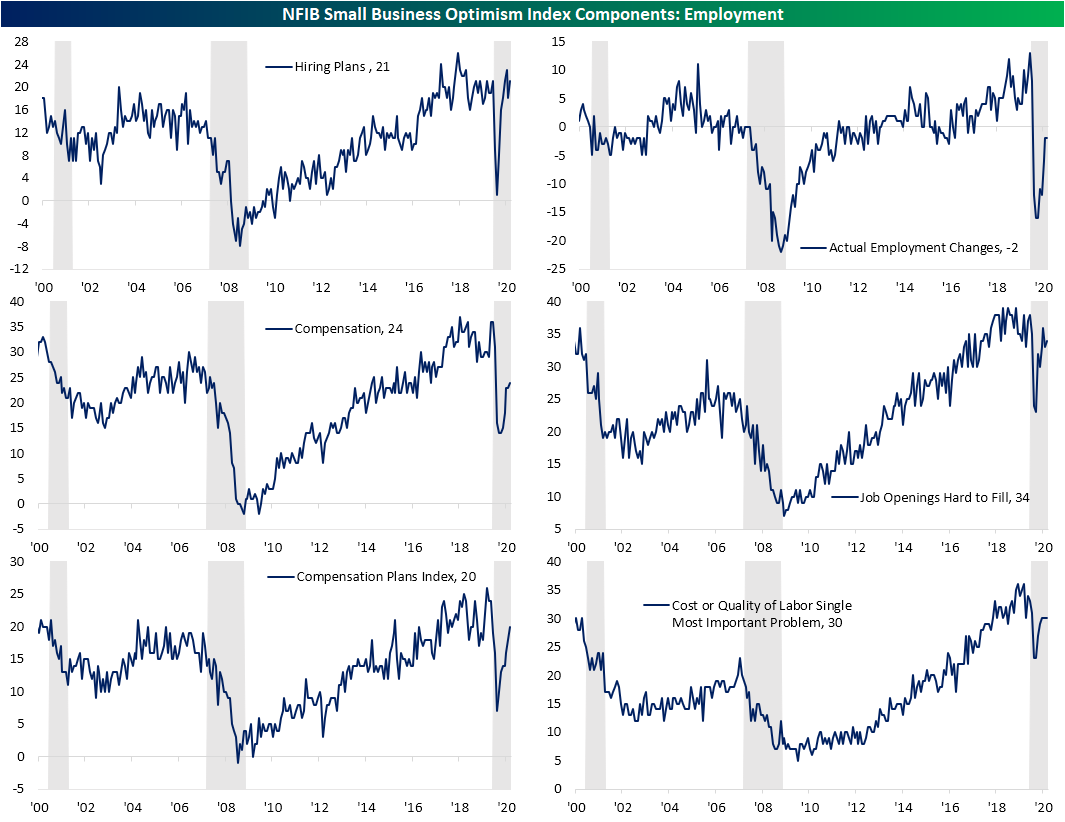 Rising employment and compensation can be justified when looking at the indices concerning sales and earnings.  While these broadly took turns lower this month, they remain at readings that are consistent with more companies than not seeing sales growth. The index for earnings changes turned a bit lower falling from -4 to -7. Despite that, it is still a level that is at the top of its historic range.  Additionally, a net 5% of reporting firms saw higher sales over the past three months, down slightly from 6% last month.

In turn, the net percentage of owners expecting sales to be higher also fell to a reading of 10% from 11% last month. Even though sales were a bit weaker, prices have continued to rise. The index for companies reporting higher prices rose from 15 to 18.  That is the highest level of that index since a reading of 19 in May of 2018. NFIB highlighted further that the most common businesses to report higher prices were retail (28%) and wholesale (23%). 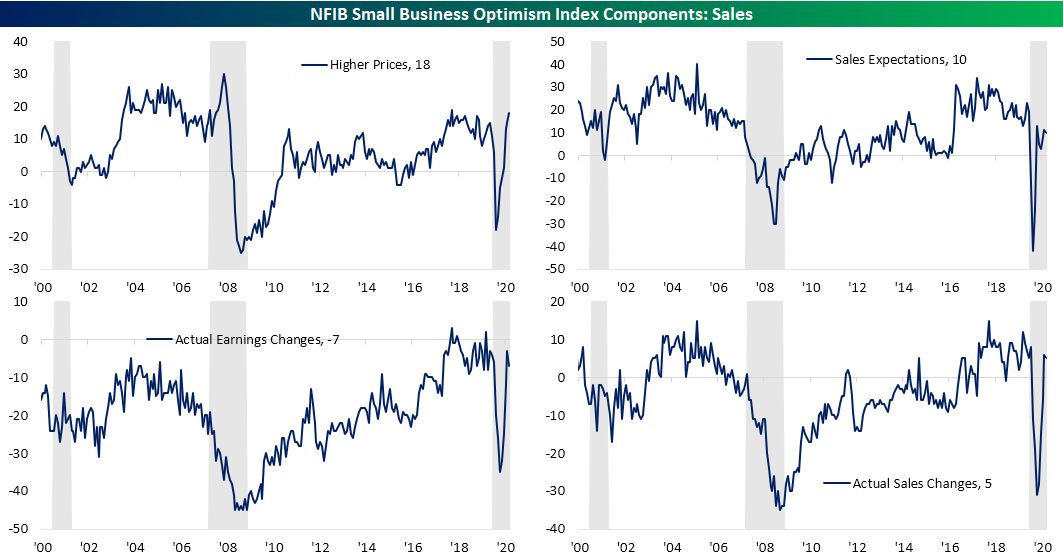 Although the decline in expected sales was modest and businesses plan to increase hiring, the index that took the biggest hit in November was the reading for expectations for the economy to improve.  That index for the general outlook of business conditions fell 19 points month over month to a low reading of 8.  That is the lowest level since March when the index was 3 points lower at 5.  Additionally, the only time the index has declined by more in just one month was in November of 2012 when it fell from 0 to -38 in just one month. Other indices like those for expenditures and whether or not it is a good time to expand similarly remain weak, but did not see the same sort of dramatic declines.

Looking at other indices though, this decline appears to have been relatively extreme. A net 5% of owners report inventory levels are too low which is tied with September for a record high.  While a greater share of firms plan to increase rather than reduce inventories, that index did fall from a 48-year high of 12 last month down to 5 in November.  Despite that historically large single month decline, this monthly reading is still at a strong level.  Start a two-week free trial to Bespoke Institutional to access our interactive economic indicators monitor and much more. 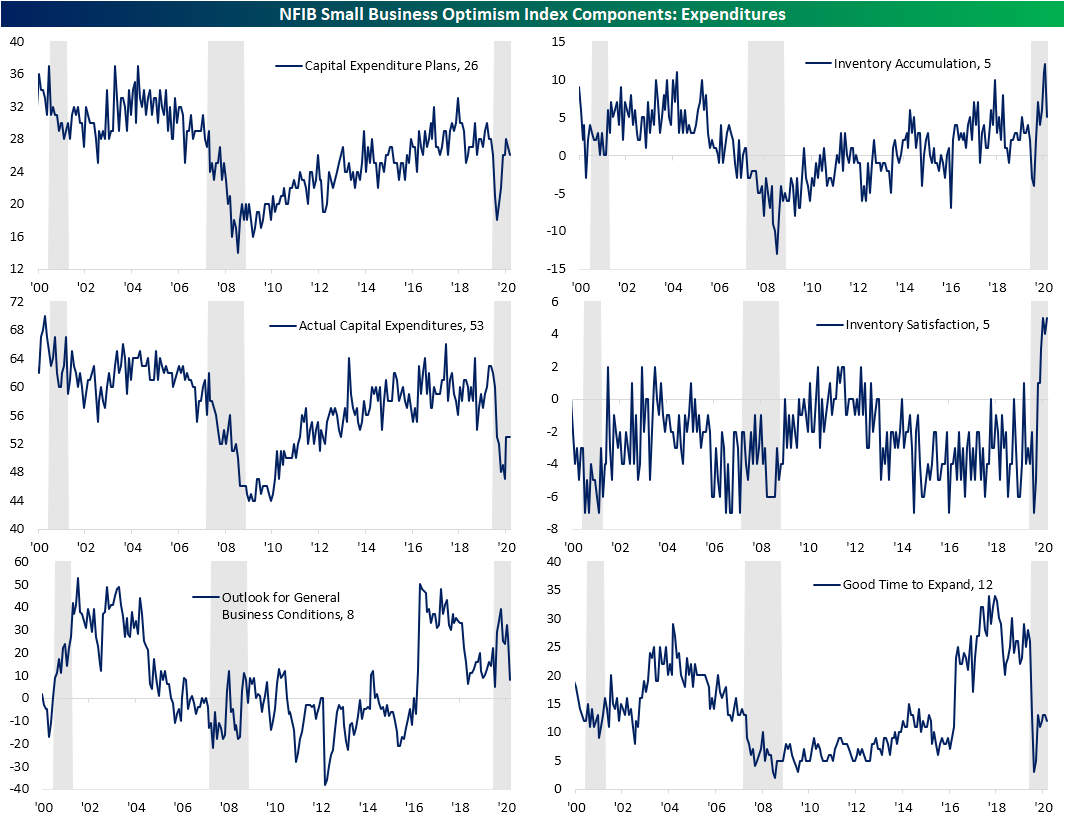