Not a Normal Bounce Back Day

The large-cap Russell 1,000 was up 4.35% on the day, but notably, the average stock in the index was up much less than that at just +3.25%.  The reason for the big performance divergence is because the largest ten stocks in the index were up an average of 5.29% on the day.  A cap-weighted index that’s as top-heavy as it is now benefits greatly when its largest members outperform, and that’s what happened today.  The two trillion-dollar companies in the index — Apple (AAPL) and Microsoft (MSFT) — were up 9.31% and 6.65%, respectively.

Normally on big bounce-back days, the stocks that got hit the hardest during the selloff bounce back the most.  That didn’t happen today.  Below we’ve broken the Russell 1,000 into deciles (10 groups of 100 stocks each) based on share price performance during the massive selloff we saw from the market’s peak on 2/19 through last Friday (2/28).  The stocks that fell the most during the selloff (decile 10) actually bounced the least today, rising just 1.92% on average. 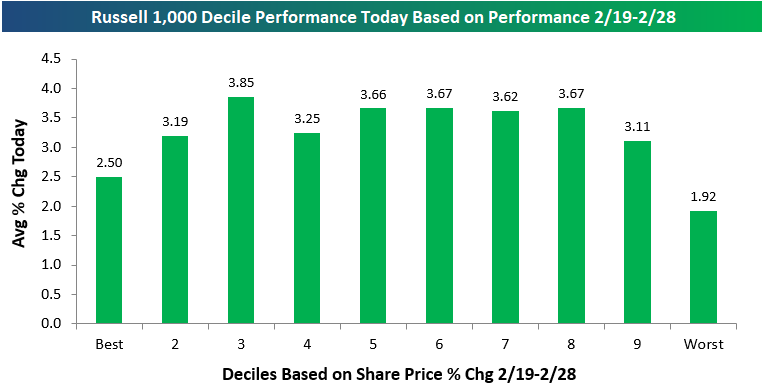 Costco (COST) and Apple (AAPL) were the 5th and 6th best performers in the Russell 1,000 today with gains of 9.96% and 9.31%, respectively.  Other notables on the list of biggest winners today include S&P Global (SPGI), Gilead (GILD), Scotts Miracle-Gro (SMG), Moody’s (MCO), Clorox (CLX), Twitter (TWTR), and Church & Dwight (CHD).  From Health Care to Consumer Staples to Tech, a large number of sectors were represented.  However, one sector with no names on the list of best performers today was Energy.  What else is new?  See our most actionable market analysis with a Bespoke Premium membership.  Click here to start a two-week free trial now. 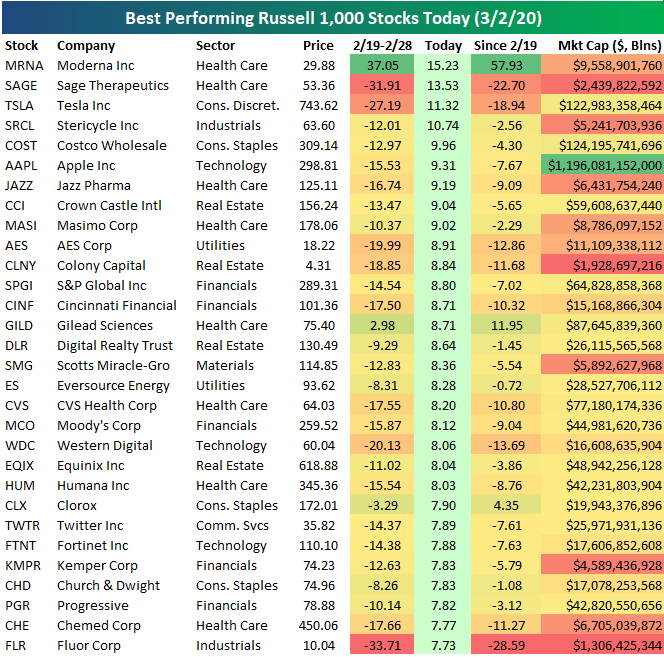